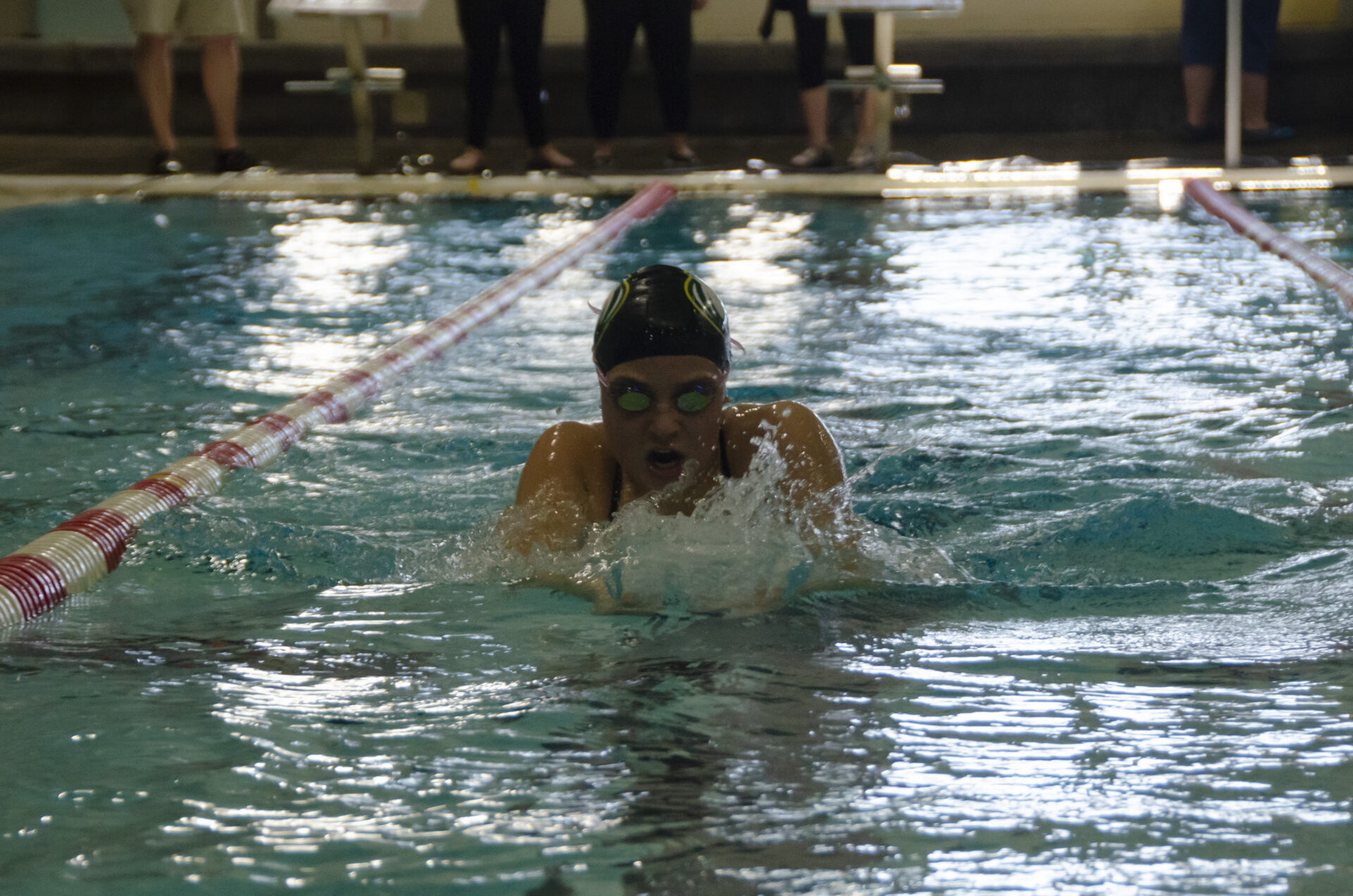 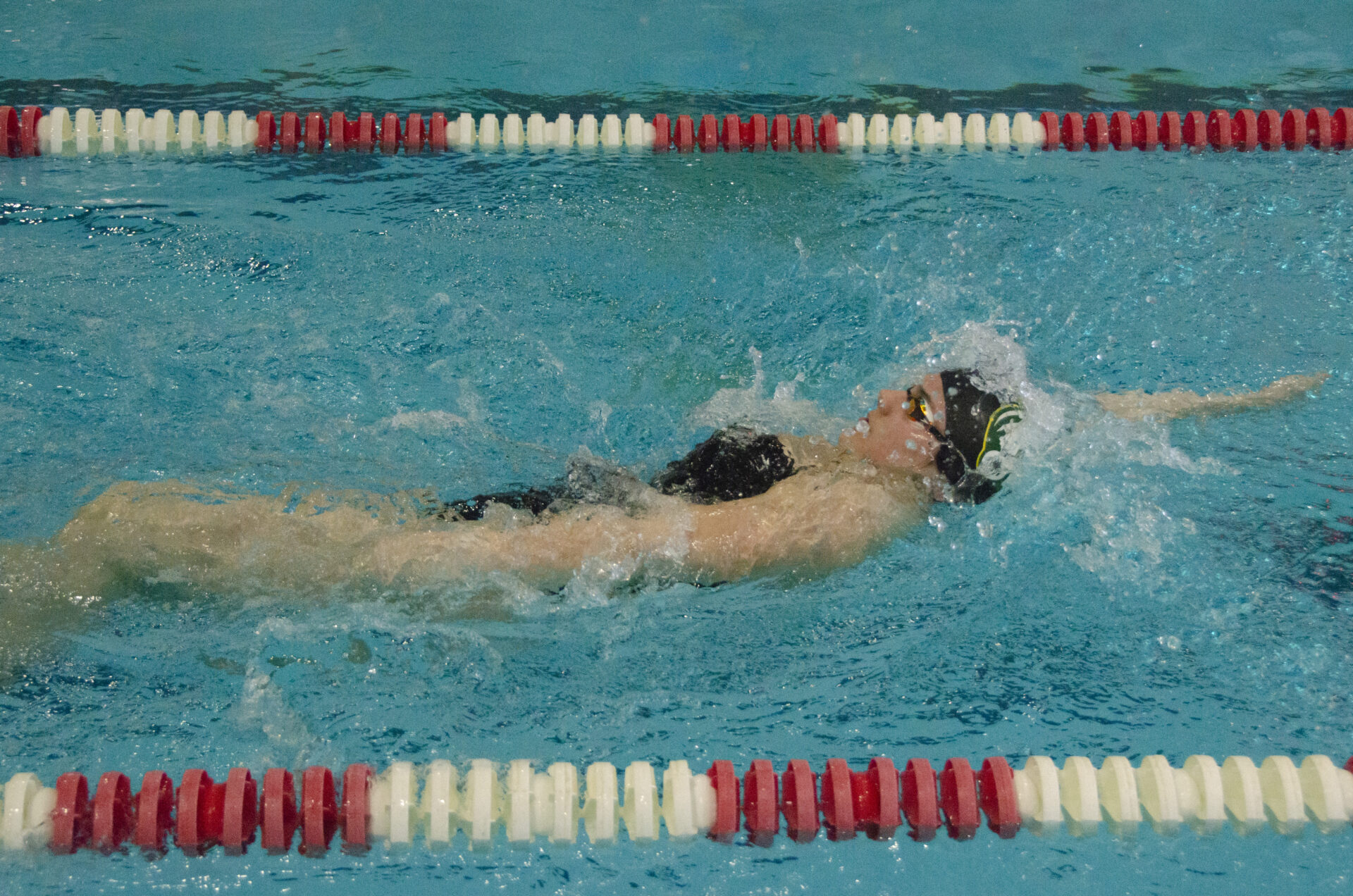 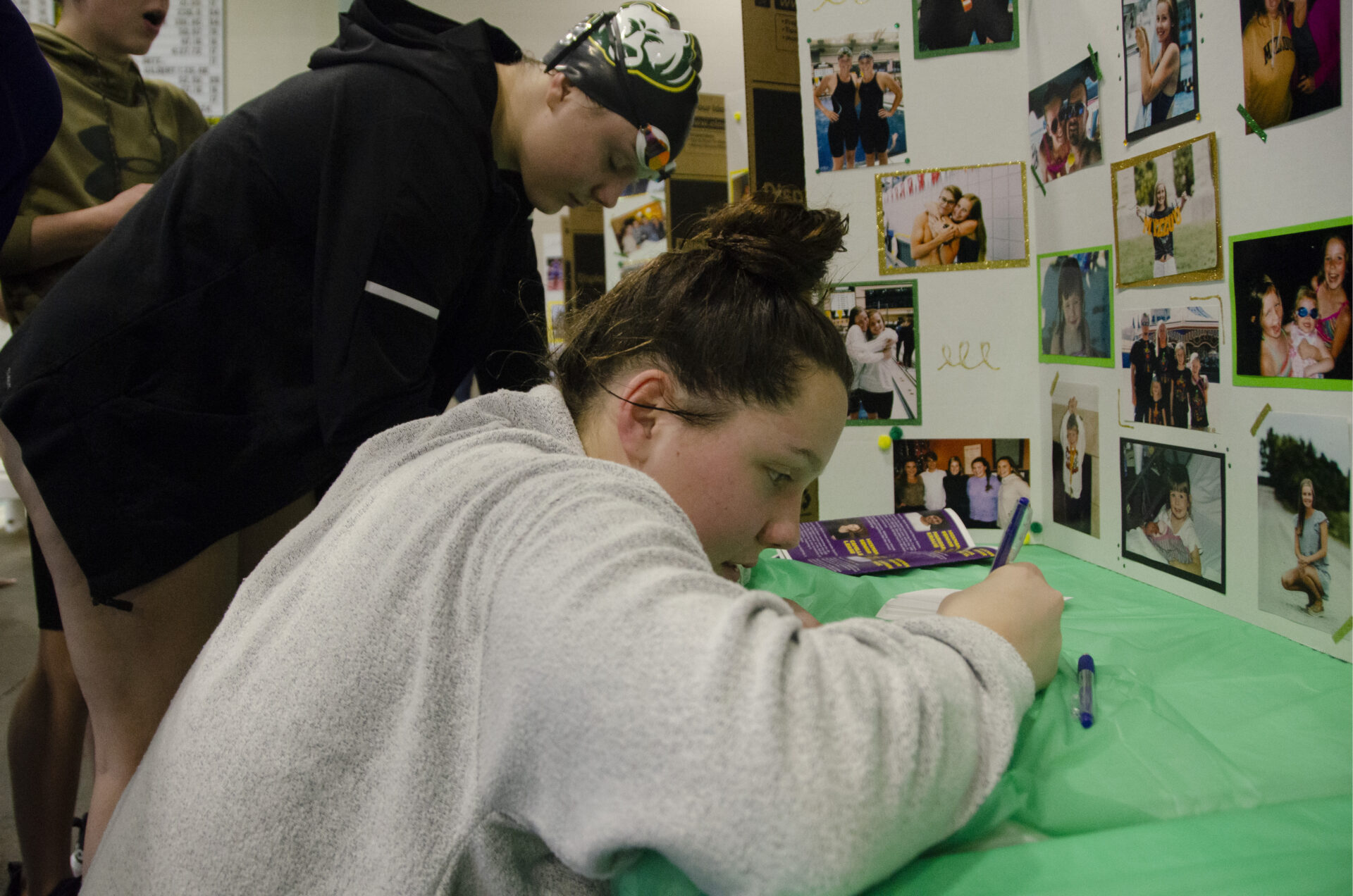 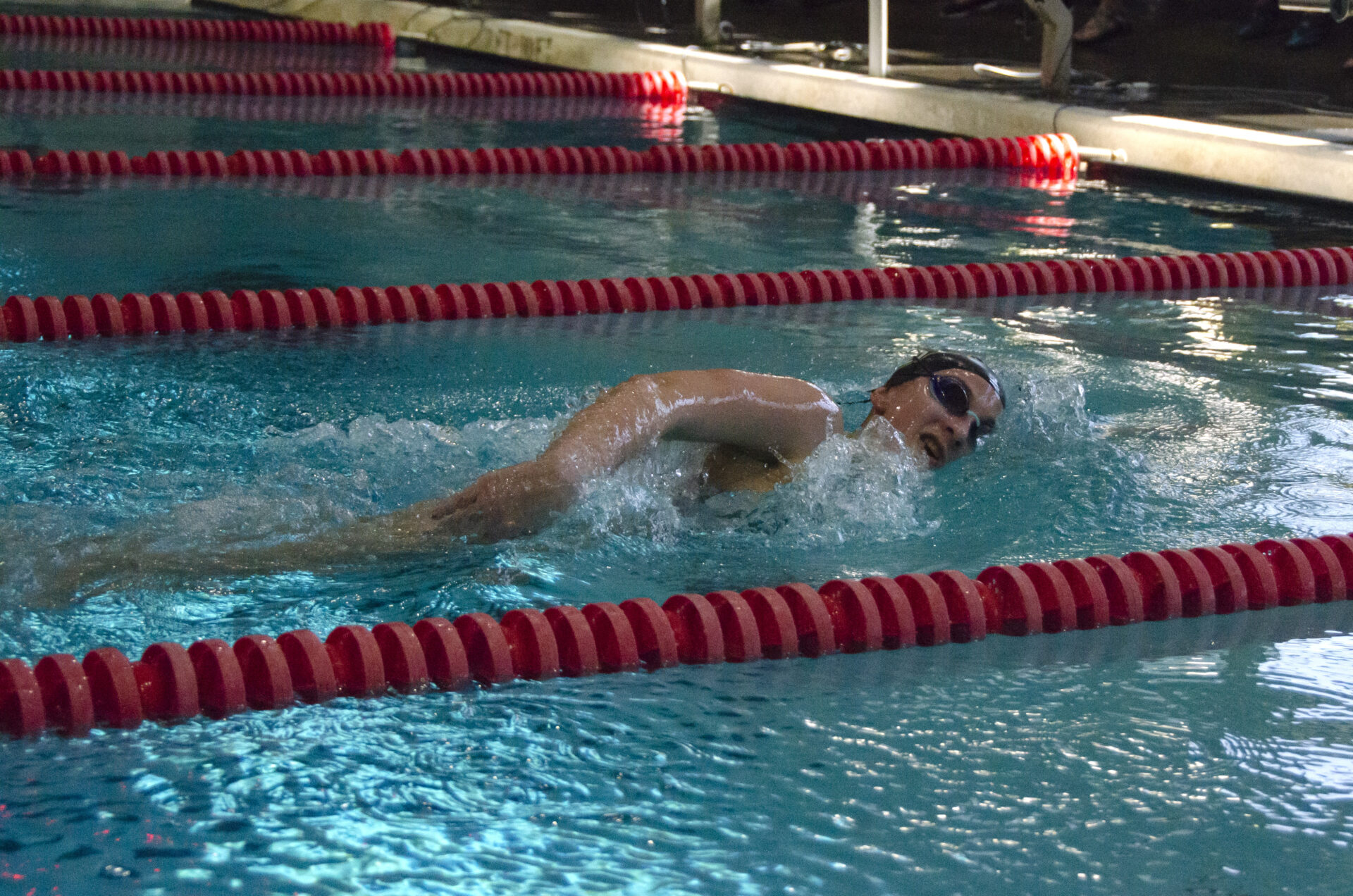 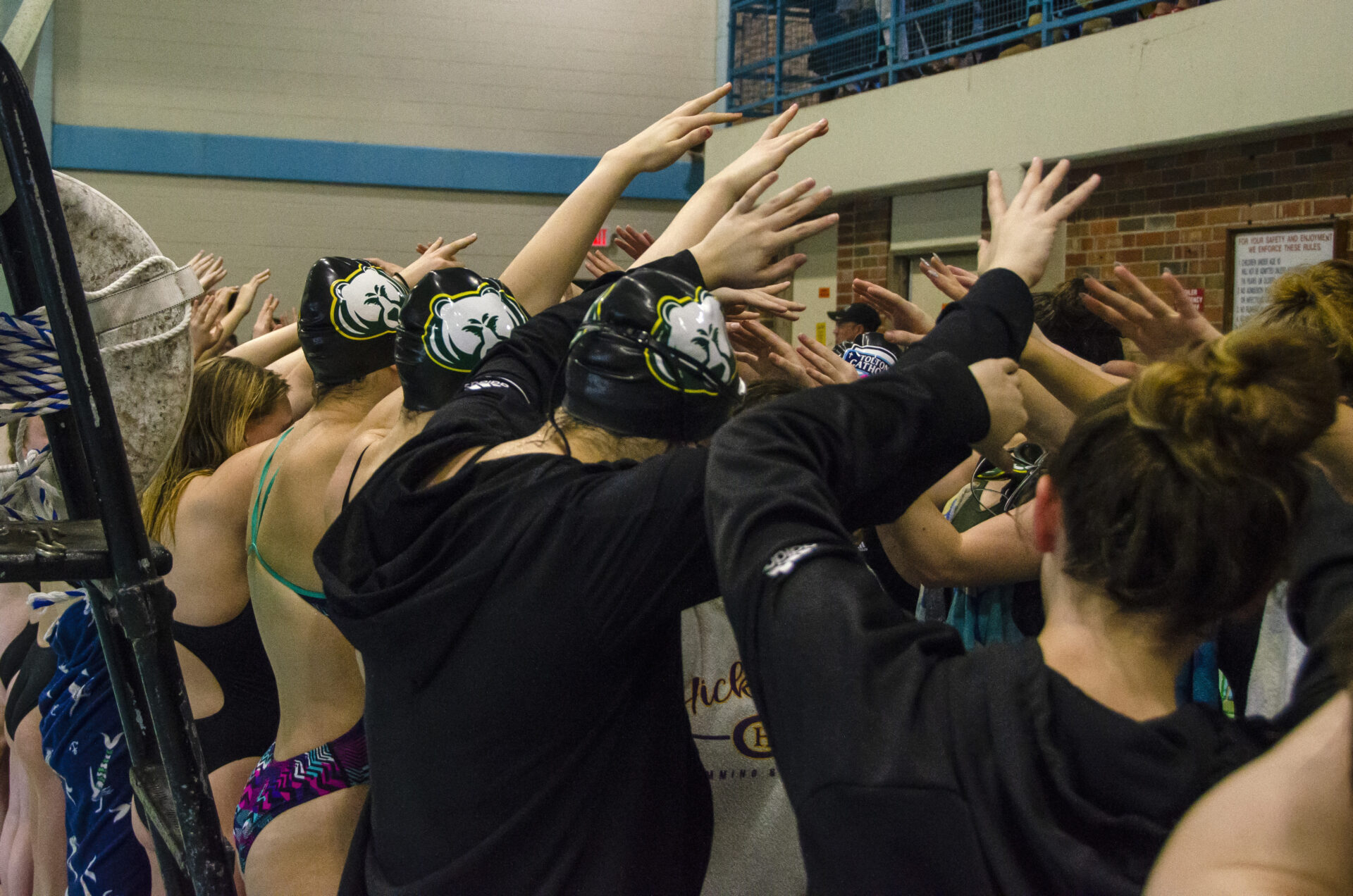 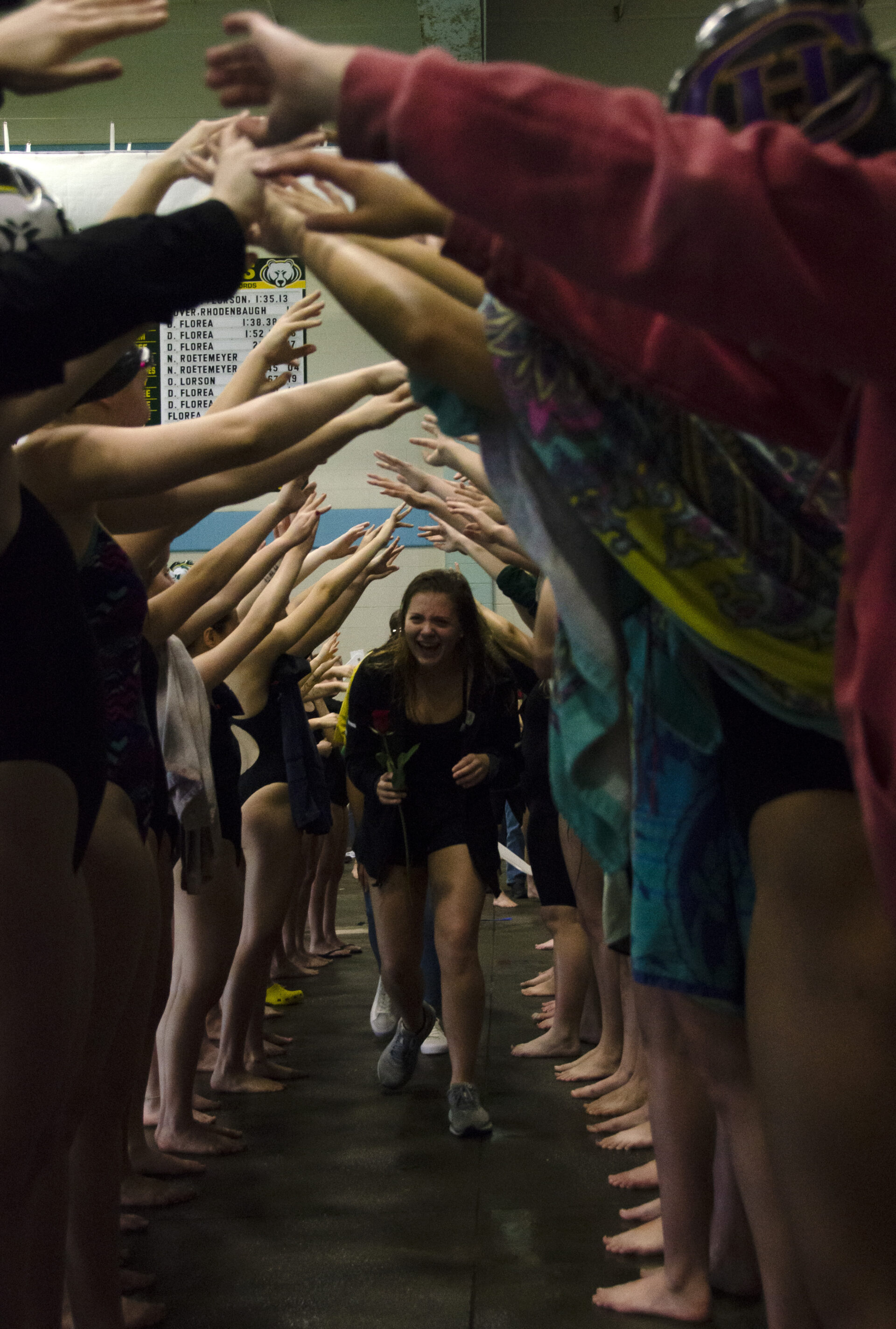 “We hosted this meet, so that Team COMO could have one last home meet to try and qualify before heading off to state,” head coach Taylor Birsa said. “We also kept with our longstanding tradition of honoring the seniors on our team.”

The Bruins did not achieve any new state qualifying times, but they did lower some state consideration times. Most importantly, they achieved a sense of unity as a team, and were excited to compete together.

With the ceremony being in the middle of the competition, the team was more focused on celebrating each other and the team as a whole as opposed to winning the meet. The competition began with the 200-yard medley relay, in which four swimmers swam 50 yards of one of the four strokes, with the first swimmer swimming backstroke, the second swimming breaststroke, the third swimming butterfly and the last swimmer concluding the race with freestyle. RBHS had a total of six relay teams competing in the event, giving every girl on the team a chance to race with their teammates.

The fourth event, the 50-yard freestyle, had the most swimmers, with six heats of participants. Although many were attempting to lower their times, swimmers who already had their state championship times decided to have some fun with the race. RBHS juniors Elise Henderson, Olivia Henderson and Mara Manion decided to swim the event as a 50-yard individual medley, swimming 12 and 1/2 yards of each stroke.

Following the conclusion of the 50-yard freestyle, the time came to honor the seniors on Team COMO. The swimmers congregated on the side of the pool opposite the starting blocks and formed a tunnel by standing on either side of the seniors and waving their hands above the seniors’ heads. One by one, Birsa listed off the names of the seniors, the names of those escorting them, their planned school and subject of study for next year and their favorite memory from their four years on the team. Although the atmosphere was celebratory, for some, the moment was extremely emotional.

“Seeing all my teammates lined up and cheering for all of us was one of the most surreal experiences.”

“It was super overwhelming, but in the very best way. Seeing all my teammates lined up and cheering for all of us was one of the most surreal experiences. I’ve been on the opposite end of the ceremony experience for the past three years and could never imagine what it would feel like to really be a part of it,” senior Ansley Barnes said. “It was way more emotional than I had expected. Hearing the cheers and seeing the faces of all the girls that I’ve seen every morning for the past three months reminded me why I love swimming as much as I do. I remember thinking about all the memories I’ve made through the sport, about my teammates who became my best friends along the way, and how long I had waited for this moment. It’s an experience I will never forget.”

The next event was the second relay of the meet, the 200-yard freestyle relay, in which each of the four competitors swims a 50-yard freestyle. The event was also Richards’ last event as a Team COMO swimmer at her home pool.

“The experience was surreal. I had been looking forward to this meet since freshman year,”  Richards said. “Although my final race of the day was not one of my better events, it was made special by every teammate who swam beside me.”

“Although my final race of the day was not one of my better events, it was made special by every teammate who swam beside me.”

Richards competed in the relay with the team of Henderson, senior Allison Koller and sophomore Stella Wagner. Although their meet was complete, there were still three events left.

By the time the 100-yard backstroke and 100-yard breaststroke started, most of the Bruins were done with their events. They stood around the deck in small circles, laughing to one another, admiring the picture-boards they had made for all of the seniors and cheering on their few teammates who had yet to complete their last event. The meet concluded with the 400-yard freestyle, in which no RBHS swimmers competed.

Overall, Team COMO was happy with the meet and thankful for the opportunity to honor their seniors. Although there were no new automatic state championship qualifying times, spirits ran high and the sense of togetherness was palpable.

“The Last Chance meet is always bitter-sweet. It’s the last meet for the majority of the girls and it’s great to see them race one more time and to see some more time drops, but it’s the meet before championship season,” Birsa said. “It’s also a great last meet to improve state times, or to secure state times or to lower state consideration times like we did.”

How does your sport honor their seniors? Let us know in the comments below.

New Year’s resolutions are good for every day