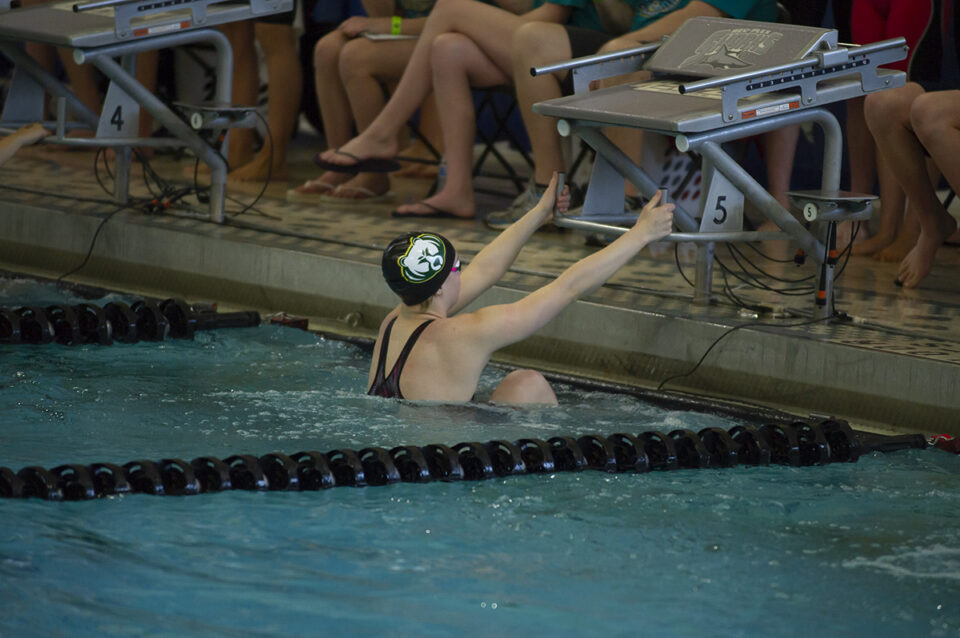 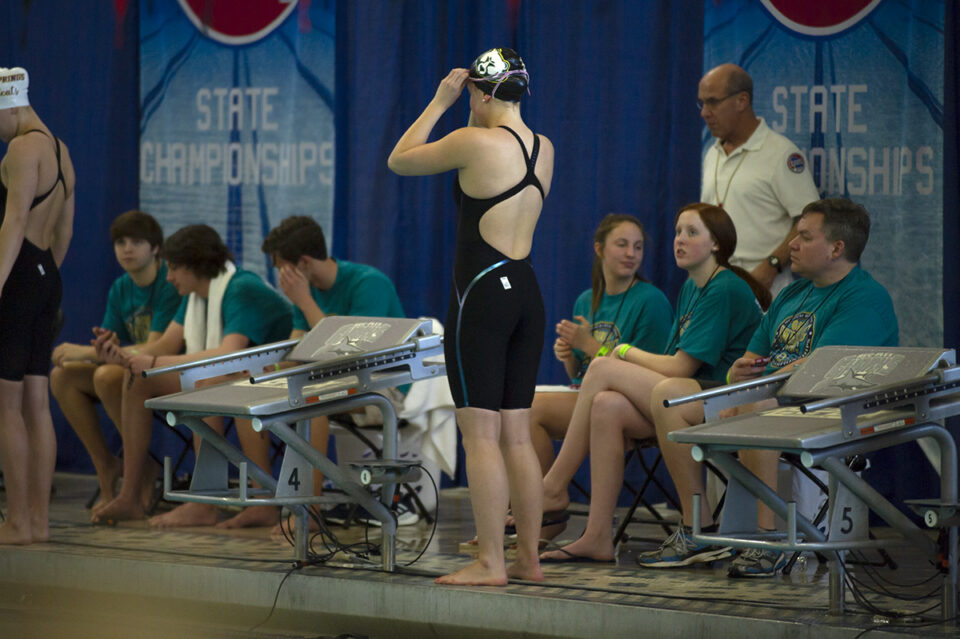 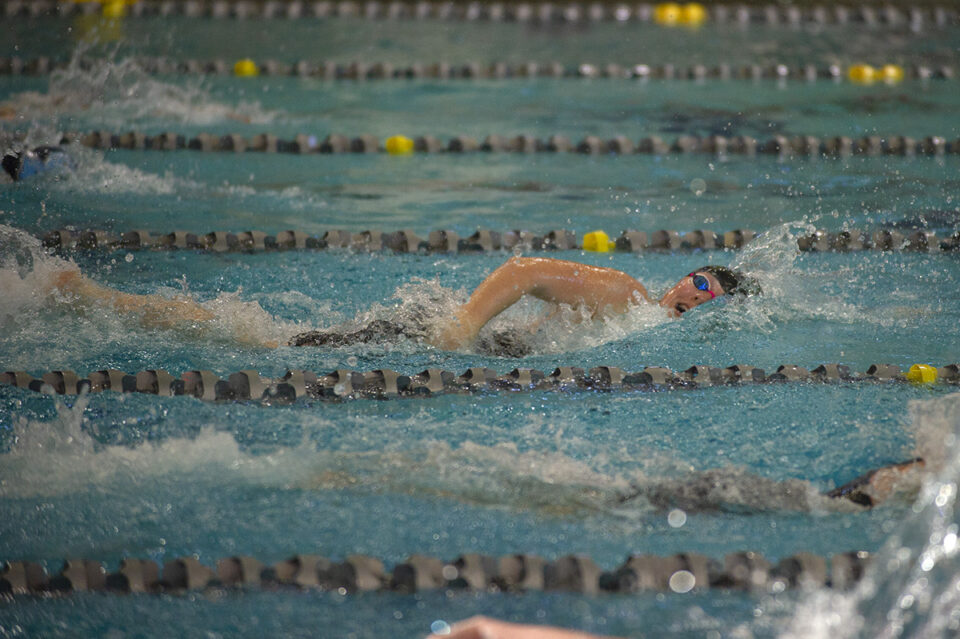 The Bruins were ready to go, blasting their favorite music on the bus ride and sporting their white “State Team” jackets. Their whole season had led up to this meet.

“The overall mood of the team was loose, but tensions were also running high. I felt calm, but became nervous when the first event began,” head coach Taylor Birsa said. “The girls were excited, but I could tell they were intently thinking about their races and how they needed to do them.”

Preliminary races began at 5 p.m. Feb. 21 with the 200-yard medley relay, in which the RBHS team of juniors Mara Manion and Olivia Henderson and seniors Ansley Barnes and Reagan Richards placed second with a time of 1:48.67, securing their spot in A finals.

“[Swimming at State] was really exciting because I missed doing it so much, and I was so scared that I wouldn’t be able to,” Henderson said. “I wasn’t as nervous as I usually am at meets like this, just because I was so excited to be there and was more focused on being happy that I was even able to swim.”

Over the summer, E. Henderson had dislocated her shoulder. While this would have been a somewhat minor injury, the doctors told her that because she had broken her clavicle as a child, she could either let the injury heal and run a high risk of dislocating it again and tearing her labrum in the process (a career-ending injury), or she could get preventative surgery. E. Henderson elected to undergo surgery on Aug. 21, and her doctors said she would be fit to swim at State. Six months later, she did just that.

There were no swimmers from RBHS in the third or fourth events, the 200-yard individual medley and the 50-yard freestyle, allowing RBHS to begin the break, which normally follows the 50-yard freestyle, a few minutes earlier than other teams. The Bruins took this opportunity to warm down from their previous events, discuss race strategies with coach Birsa and clear their heads, in order to enter the second half of the meet refreshed and confident.

After the 100-yard freestyle was the longest event, the 500-yard freestyle, in which Barnes got third with a time of 5:09.78, making her one of the top three in the A final the next day.

Event number nine was the 200-yard freestyle relay, in which the team of Richards, E. Henderson, senior Allison Koller and freshman Danika Osman got 18th with a time of 1:48.68.

The tenth event was the 100-yard backstroke, in which Manion and O. Henderson once again faced off. Manion finished just ahead of O. Henderson for the second time, beating her by four tenths of a second. The swimmers achieved third and fourth with times of 57.92 and 58.35 respectively, placing them both in A finals.

In the final individual event of the preliminaries, Richards obtained seventh and a spot in A finals with a time of 1:09.32 and E. Henderson finished 17th, posting a time of 1:10.81.

In the final event, the 400-yard freestyle relay, the team of E. Henderson, O. Henderson, Barnes and Manion ended in first with a time of 3:35.23, boasting the title of top seed in the A final.

Once the Bruins were back at their hotel, they celebrated and refueled with pasta and breadsticks, intending to load up on carbohydrates to build up their energy reserves for the next day. After dinner, the swimmers spent the night soaking in ice baths, enduring the pain so that their muscles could be refreshed for the next day.

On the second and final day of competition, RBHS competed in the state finals.

The finals session followed the same order of events as the previous day, beginning with the 200-yard medley relay, in which the team of Manion, Richards, O. Henderson and Barnes posted a time of 1:49.08 and achieved third place overall and 28 points.

Did you know?
In finals, relays score double the amount of points that individual events score.

Because Barnes would compete in the event immediately after, she accepted her medal and quickly returned to the pool, doing as much warm up and warm down as possible in the few minutes before the start of her event. In the 200-yard freestyle, Barnes placed 11th with a time of 1:58.04, scoring six points.

Just like the previous day, the Bruins had no swimmers in the third or fourth events that preceded the 15-minute break, allowing them to relax for a short while. The Bruins used the time to warm up and warm down, recalibrating their bodies and minds so that they could swim the second half of the meet to the best of their abilities.

Following the break, Richards swam the 100-yard butterfly, going a time of 1:00.61 and placing 15th, earning two points for RBHS.

In the final individual event, the 100-yard breastroke, Richards posted a time of 1:08.82, placing fifth and scoring 12 points.

At this point in the meet, the Bruins’ morale appeared to be low. Although this was not true for every swim, there was a trend of gaining time from the day before, and therefore achieving lower than their seed placement.

“It hadn’t been the meet I was hoping for, as far as individual events go, but I think we all knew that relays were so important,” O. Henderson said. “Even though it was tough knowing I wasn’t doing my best, I needed to pull it together for the sake of the rest of the team.”

The Bruins did just that during the 400-yard freestyle relay, the final event. As the RBHS team of E. Henderson, O. Henderson, Barnes and Manion walked behind their lane, the energy on deck was electrifying. The Bruins, seeded first in that event, intended to keep it that way. The girls, ready to cheer for their teammates from the bleachers, tensed every muscle as E. Henderson climbed up on the blocks and exploded into a chorus of cheers as soon as the starting whistle blew.

Although the Bruins finished the first 100 yards of the race behind their seeded placement, fourth instead of first, the gap between them and the team in first was rapidly closing.

When O. Henderson reached the wall and Barnes dove in above her, the Bruins were in third. The girls who weren’t swimming started cheering steadily louder, seeing that the Bruins could close the gap and win the event. By the time Barnes had ended her 100 yards, the Bruins were barely in second, with Manion diving in mere tenths of a second behind the team in first. Manion overtook the competing swimmer with ease, and when she finally touched the wall, the Bruins posted a time of 3:32.50, three seconds faster than they had swam the previous day.

However, silence fell over the room as the announcer stated that there was an inquiry in that heat, meaning that the Bruins could have potentially gotten disqualified, nullifying their time and earning no points. The team held each other in a tight circle behind their lane, hoping with all they had that they didn’t just swim their hearts out for nothing. Barnes broke into tears, cracking under the extreme stress of the situation. The world seemed to stall for those few strained minutes.

Thankfully, the announcer stated that the disqualification was charged to lane two, meaning the Bruins’ time stood, and they earned first place and 40 points for their team. Barnes’ tears of despair quickly turned into those of relief.

Overall, the Bruins were fourth at the meet with 159 points, bringing home a trophy.

“In the middle of the meet, I knew some of the girls wanted to swim better than they did, and it weighed on them, but both [assistant coach Jared Larson] and I told them they had to move past that and focus on the races they had left,” Birsa said. “I was happy with our swims. We did well with the few girls we had in finals and did everything we could to secure fourth place. My favorite race was definitely the 400-yard freestyle relay. They raced their hearts out and came out with the win.”