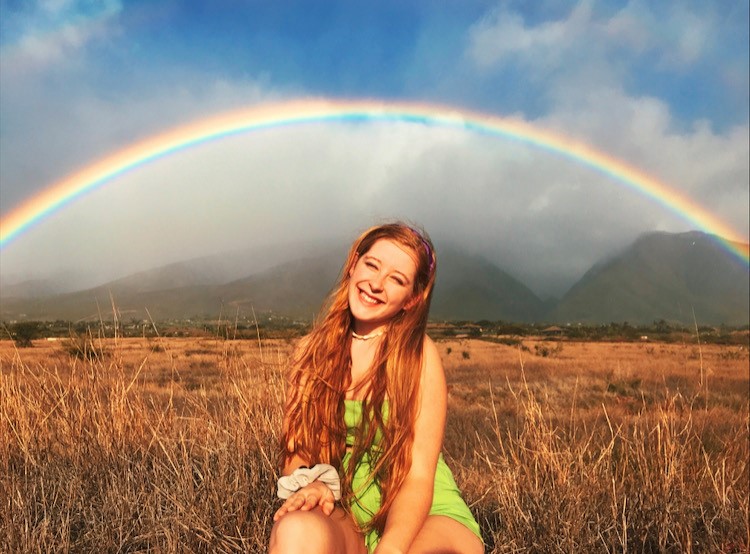 The tropical world around me flooded my senses as I drove beside a double rainbow surrounded by every color under the sun. To the left of the Hana highway we were driving down were blue skies fading into turquoise waters, and to the right, a rich green rainforest obscured by mist and framed by the Kahalui mountains that rose from the center of Maui. Pulling over to take pictures, the rainbow felt like Hawaii's way of welcoming us to the island.

“Aloha and welcome to Maui,” shouted a group of cheerful Hawaiians, waving my family toward them as they awaited our arrival just outside the Kahului airport. Greeting us with wide smiles and bright yellow flower necklaces, they ushered us toward our car and draped the scented wreaths around our necks. “You just got lei’ed,” they said, laughing, and the familiar feeling of déjà vu washed over me. I had heard that joke as a child, years ago, when visiting Maui was an annual tradition I took for granted rather than a dream vacation I could hardly believe was real. Feeling the warm breeze through my hair, I took a deep breath of the aromatic air and stepped into the shuttle bus, the unimaginable happiness of Hawaii ahead of me.

Putting in my airpods and tuning into the good vibes around me, I zoned out of everything except my Hawaii playlist, the Zac Brown Band and the sparkling coast view. To the left of the Hana highway we were driving down were blue skies fading into turquoise waters, and to the right, a rich green rainforest obscured by mist and framed by the Kahalui mountains that rose from the center of Maui.

Feeling the warm breeze through my hair, I took a deep breath of the air and stepped into the unimaginable happiness of Hawaii ahead of me

With my face pressed against the window to see the passing scenery, my eyes began to burn, but I couldn’t tell if the cause was the contact lenses asphyxiating my corneas or the shocking adjustment to the intense vibrance everywhere. The tropical world around me flooded my senses as I drove beside a double rainbow surrounded by every color under the sun. Compared to the monochrome gray of winter in Missouri, Maui looked like life with a sparkly filter saturated to the max.

The week flew by in a technicolor blur, with every second of Hawaii time crammed with scuba diving, hiking, snorkeling, boating and exploring the island. Every night I was exhausted from doing so much but still wished I had fit even more into each day.

Our first night in Maui, we walked the whole five mile stretch of pristine beaches, unpacked and looked around Whaler’s Village, a little beachfront plaza on the resort lined with fairy lights, ice cream shops and palm trees. Leaving the group with my sister and favorite person there, we shopped for jewelry, flowy dresses, anklets, and gifts for everyone back home. Going back to the hotel room, we collapsed in bed without setting an alarm, feeling four hours ahead Missouri time.

The next day was chiefly spent sleeping off the time difference, but eventually we woke, collected fallen flowers from around the resort to press, took family photos on the beach and played giant chess with life-sized pieces.

We spent our third day in Paia, which was where the vacation really picked up. Paia is a small town of hippy counterculture on the other side of the island, far enough away from the tourist area to get a real feel for Maui. Driving past the bright pastel buildings of downtown Paia, we ended up at a set of secret tidal pools right off Hana highway. Dodging the cars and sliding down the cliffside, we found a reef full of conch shells, starfish, crabs, sea urchins and sea turtles. In what was the highlight of my whole trip, we got to see four sea turtles swim through the reef and scoot onto the sand just inches away from us. Laying in the sand with my camera in hand, one of the turtles pulled herself right next to me, close enough to touch. Sitting and blinking at me with her huge eyes for more than an hour, I was tempted to reach out and pet her but didn’t since it was against Maui law. Spending the better part of the afternoon with my new turtle friend, we stayed until the sun went down, said our goodbyes, then went to explore downtown Paia. With half the vacation over already, I couldn’t believe how fast the time had gone. 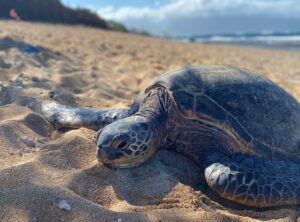 The rest of the days flew by, highlighted by a road trip to the jungle of Maui, making resort friends, snorkeling at a deserted cove, and celebrating my cousin’s 21st birthday. We spent an entire day driving into the mountains from the beach on the “Road to Hana,” a dangerous one lane path passing hundreds of waterfalls, hikes and beaches. Once you make it past the hours spent on winding roads on the edge of the coast cliff, you find yourself at a beach made of snowy white sand, a beach made of golden sand and seashells and another beach made of black sand, hidden between towering cliffs and hidden caves. Stopping to collect fallen coconuts, hike through the rainforest and shop at fruit stands, it took us from 7 a.m. to 2 p.m. to make it to Hana. Arriving to pouring rain and thunder roaring in the distance, my sister and I were to only ones who left the car and explored Hana. Swimming in the storm churned ocean, we found a cave that lead from the beach out into the sea. We waited out the storm listening to the rain fall on the rocks above us. 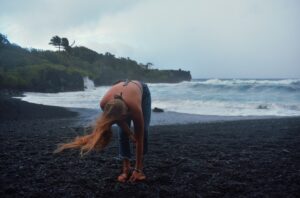 Leaving before the rain stopped, I only had time to take six photos without completely destroying my camera. Pointing, shooting and squinting through the downpour, I didn’t actually see any of the photos until after I took them, dried my camera off in the car and downloaded them that night. Surprisingly they turned out, producing photos hyper focused on the foreground with a background blurred by rain. Although I appreciated having the photos, I was sad my last memory of Hana was me stressing out over a camera.

On our second last day, we took a boat out to the island of Molokini to whale watch and snorkel through a black and white coral reef. Diving right in, I brought my mother’s waterproof camera with me to take photos of the aquatic world. As I fumbled to turn it on, I dropped the camera almost immediately and watched it fall in slow motion as I struggled to unbuckle my life vest and plunge down to grab it. Landing in the middle of a coral polyp, I lost sight of it and swam back to the boat to ask for help. One stranger from a different group was kind enough to dive down and get it for me, returning the waterlogged camera to the ship. Missing out on the excursion while I tried to fix the camera, I sat for an hour shaking water out of it and trying to salvage the battery and SD card. Leaving to go to a different location, I decided to give up on photography for the day, deterred by such a disaster. Enjoying the rest of my technology free trip, I played with starfish, swam with sea turtles and was only slightly sad that I would have no pics to prove it.

The very last day on Maui we swam, relaxed on the resort and took a few final photos to commemorate our last sunset in paradise. My sister, whom I bribed to become my personal senior portrait photographer, complained about the photoshoot but ended up loving angling the light of golden hour, picking locations and playing with my Nikon camera’s quality, which was far better than her iPhone’s. A part of me made her do this to get pictures for Instagram since I had been behind the camera for the whole week, but another side of me wanted her to fall in love with photography like I had too.

These are some of the photos she took. 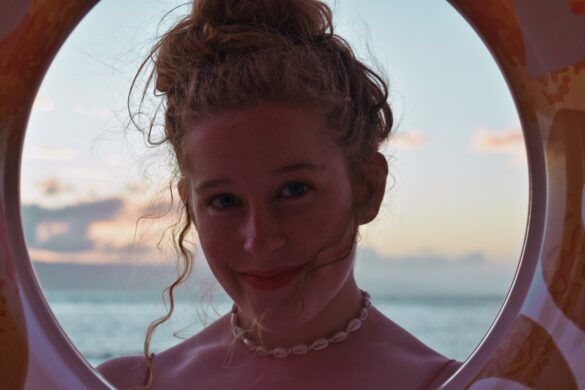 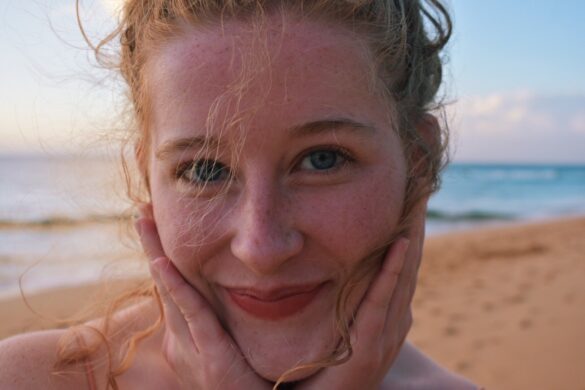 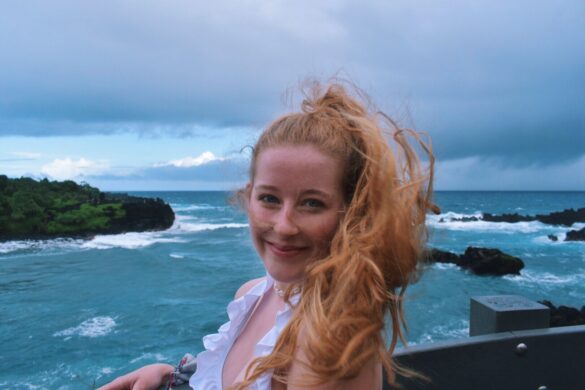 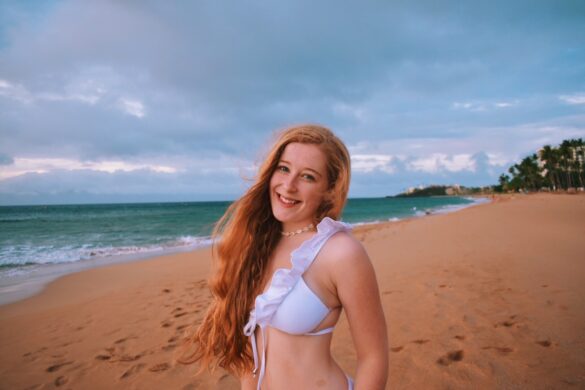 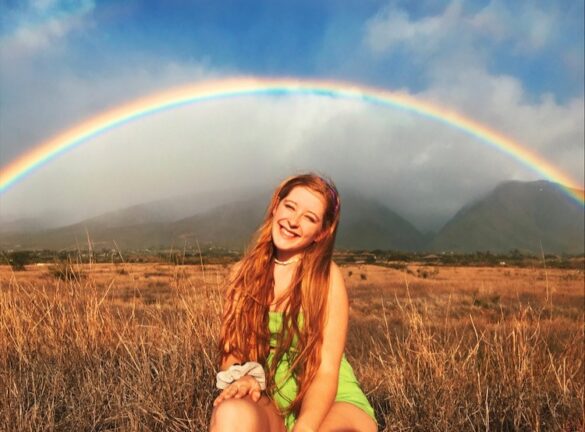 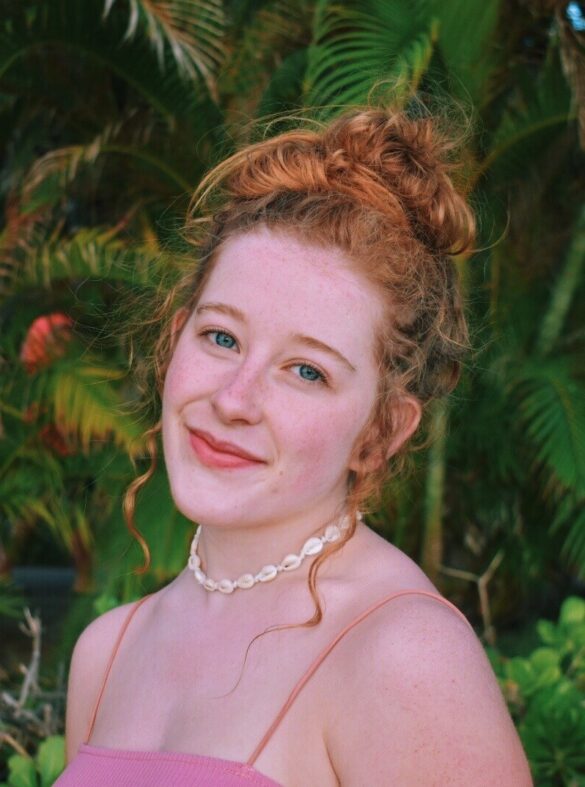 Leaving didn’t seem real. I felt like I had just arrived in paradise, and that I hadn’t done anything to get me kicked out of it just yet. Realization hadn’t hit yet, but as the plane took off the air got cooler, so I grabbed a blanket, put on Call Me By Your Name, and took a nap. At some point the intended nap extended to the point of actual sleep, and I woke up to nothing but grey outside.

Coming back to school, the bleak reality of a two-day-old slushy snow and the sepia life of Missouri, I spent a whole day in bed listening to the Lilo and Stitch soundtrack and looking back at photos. Each picture I had taken drew me into a memory, transporting me back to a time and place I’d rather be.

My compromise with myself was that everywhere I went, every photo opportunity I had I would spend the first two minutes taking pictures on Snapchat, Instagram, my phone camera and my actual camera. After I was done with that I would forget about photography and go enjoy wherever I was lucky enough to be. Flipping through the photos, I was thankful I had captured the moment and even more thankful I had gotten to live it.

What did you do over holiday break? Let us know in the comments below.

3 healthy recipes for students on the go