To close off a week of cultural festivities, RBHS will celebrate the 28th annual Global Village on Friday, March 13. Global Village is a day where students, if they choose to, present booths about their respective countries by handing out samples of food, showcasing artifacts and wearing traditional dress. Booth sign up is on a first-come first-serve basis, and the form is available on the RBHS website homepage.

It’s not too late to join

Registration closes Friday, Feb. 28 and no late applications are accepted. Each country is assigned a maximum of three tables, with no more than four people per table. The Culinary Arts 1 class from the Columbia Area Career Center also cook various dishes and distributes them to the crowds. They will be located in the cafeteria with separate tables for each country the members of the class choose to represent. Based on prior research, the students prepare small portions of food to hand out to the community.

The groups will line the main commons on the morning of March 13, and everyone has a chance to experience pieces of the RBHS international community. The village will last from the beginning of the school day until the end of B lunch at 12:43, when participants will clean up and close down their booths.

Assistant principal Dr. Lisa Nieuwenhuizen, who has directed Global Village for 14 years, said though she supervises the activities, it is a student driven effort. She said when people sign up for a stall, they take on the task of representing and sharing their country with the rest of the student body.

“It’s like a sampling. You can walk around, and you can see different native dresses, cultural foods, art, dance, and we do henna,” Dr. Nieuwenhuizen said. “We do a lot of different things to kind of expose people to different cultures throughout the world and I think [Global Village] is a fun way to do just that.”

During the week before Global Village, March 9-12, students and staff planned several cultural activities. Some of the events include henna, a decorative tattoo made of plant dye, various traditional dances and an international fashion show. To volunteer to tattoo henna on students, there is a form on the RBHS homepage. English Language Learning teacher Lilia Ben-Ayed, who manages the fashion show, said the exhibition of diverse clothing adds to the theme of global celebration throughout the week. In the beginning of February, Ben-Ayed displayed several ethnic dresses inside and outside of her classroom as an invitation for students to apply for the show.

“This is my tenth year [as part of Global Village] and [it is] such a unique, beautiful event that RBHS holds,” Ben-Ayed said. “I’m so proud to be part of such a diverse, welcoming and inspiring community of students and staff who are open to understanding different cultures, and I love this time of the year.”

In addition to the fashion show, dances from different countries are a popular event of the week. Freshman Fatimah Yousuf said though this is her first year running a booth for Global Village, she is already looking forward to the performances, specifically the Indian dance. She said she is familiar with the preparations for this time of year because her older brother signed up to do the Pakistan booth for the past three years.

“It’s cool that we can share our culture in an environment which is willing to learn and respect our culture,” Yousuf said. “My brother had done it for so long with my friends, so it sounded fun… and I’m [also] looking forward to the food that will be at our table.”

“I’m so proud to be part of such a diverse, welcoming and inspiring community of students and staff who are open to understanding different cultures, and I love this time of the year.”

Food, music, dance and descriptive posters are some of the many ways culture will be represented at RBHS, biology and physics special education teacher Punam Sethi said. Sethi is in charge of the international dance presentations and assists Ben-Ayed with the fashion show. She said though the Indian dance is the most well-known because they perform at the Global Village assembly, other shows they’ve had include dances representing Latin and African-American culture. Dr. Nieuwenhuizen said there is the possibility of a Bulgarian folk dance this year as well.

Part of the spirit of Global Village is the colorful art on the windows of the cafeteria with words of greeting in individual languages, which Sethi helps draw, along with hanging up flags of different countries from the ceiling. She said she wants everyone to be immersed in the broad range of culture at RBHS, not just through the food offered at booths, but also through creative visuals such as art.

“We don’t want everybody to remember the Global Village just from the food… but also through other things like the dance, music and henna,” Sethi said. “It’s very important to learn and to educate them with the concept of diversity.”

Sethi said she wants students to sustain knowledge about culture even after graduation because they won’t have the same unique chance to explore customs from other countries in a short period of time as offered by Global Village. She said RBHS helps bind the community closer together because students are able to share their individual culture with the RBHS community. Students are able to say who they are and where they are from outspokenly.

“It’s so good to see that everybody feels connected to their roots and to their religion or ethics,” Sethi said. “They feel that their identity is taken care of, and [that] they are also part of the RBHS platform.”

Senior Kanchan Hans said she is proud to display her background. She will be representing India and also helped choreograph the Indian group dance. Though she has contributed to the India booth almost every year of high school, Hans said the dance performance itself was one of her favorite activities of the week. Hans helped choreographed last year’s dance as well. It allows her to share her passion for dance and tradition to her classmates who might not know otherwise. 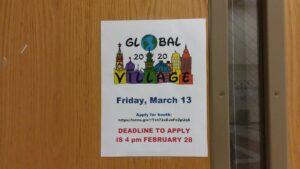 “I try to be as close to my culture as I can even when I am thousands of miles away from my home land,” Hans said. “Global Village is the perfect opportunity to blend together my American and Indian sides.”

The week of celebration allows students to find a voice in their heritage. Those participating will come in at 7 a.m. on March 13 to set up their space and prepare for the throngs of visitors. Ultimately, Dr. Nieuwenhuizen, Ben-Ayed and Sethi all said students create the events year after year through their hard work and support of diversity throughout RBHS.

“It’s really up to the students to select a country and research it and bring that culture to life for the student body,” Dr. Nieuwenhuizen said. “It’s very traditional, but we never know really what cultures are going to be represented.”

What are you most looking forward to at global village? Let us know in the comments below.