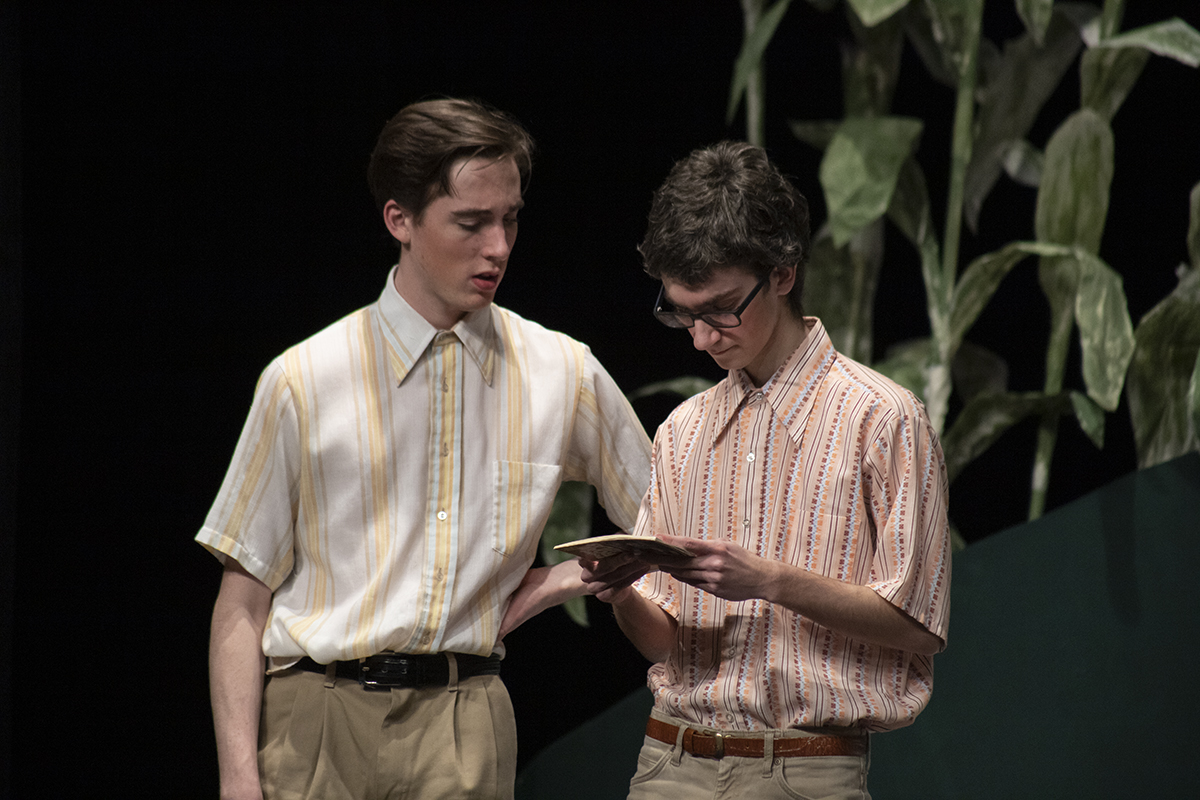 After months of preparation, RBHS Theater department will present its spring play, “Leaving Iowa,” in the Performing Arts Center, 7 p.m. Feb. 20, 21 and 22. If there is a snow day on Friday, the cast will instead perform Feb. 23. The show, set in Iowa, transitions between the present and past as it follows the development of a family and its members.

Sandy Welty, director of the play for the first time, said she first saw the piece at a national debate tournament before working as an RBHS director, but she chose this year’s cast to perform it after considering the talent and relationships within the group.

“[The play] is just a crazy road trip of memories of family bonding that make you laugh and cry at the same time,” Welty said. “So I found that when I got to Rock Bridge, we were an instant family really fast with hardly any struggles of getting to know each other and coming together. Then, I knew that they were the right group to [perform] this rich story together.”

“So I found that when I got to Rock Bridge, we were an instant family really fast with hardly any struggles of getting to know each other and coming together. Then, I knew that they were the right group to [perform] this rich story together.”

The cast and crew of the production have worked on the production since mid-December, beginning with an audition process. Junior Grace Holdiman, who plays the farmer’s wife, a mechanic, and a “very talkative waitress,” said she enjoyed auditioning.

“The audition process was a ton of fun,” Holdiman said. “We all gathered in the choir room and Mrs. Welty let us read for scenes that had characters we were interested in, and then she had some people read for specific character pairings that she wanted to see.”

Welty said there were several options of casting assigned by the script, ranging from 18 students playing 18 characters to six students playing 14 characters. She said she chose the latter because she believed the talent present at auditions warranted more stage time per actor.

“I chose to go with a smaller script or a smaller cast to give more opportunities for those actors to play multiple roles. With the talent that we have, I wanted to go smaller and challenge them to do quick changes and become somebody else instantly.” Welty said. “I could have spread it out and given more roles, but the roles would have been tiny, and you lose some of that energy.”

Junior Blake Bodendieck, who plays the male lead, older Don Browning, said he thought the breadth of emotions and bonds between the cast make the show unique. As a result, he said any audience member will be able to relate to at least part of the performance.

“It’s definitely a roller coaster of emotions. It’s definitely a comedy, but there’s also a lot of other emotions mixed around in there, which I personally don’t see much of anymore,” Bodendiek said. “It’s going to be an adventure that [students are] not going to want to miss out on. Everyone sitting in the audience, students and parents, will have at least one thing [they can connect with].”

It’s going to be an adventure that [students are] not going to want to miss out on. Everyone sitting in the audience, students and parents, will have at least one thing [they can connect with].”

Despite the rigorous work among the cast and crew, building sets, memorizing lines and practicing scenes, Bodendiek and Holdiman both said they enjoyed the process and are excited to share their work with the school and their families. Holdiman said she hopes all students are able to see the show before it closes.

[The show] is an opportunity to laugh along with an audience to live theatre. Live theater is way different than watching something on a screen, and it’s a really cool experience I think everyone should have,” Holdiman said. “It’s also an excuse to procrastinate homework for two hours and enjoy a really great story instead.”

Are you planning on seeing the play? Let us know in the comments below.