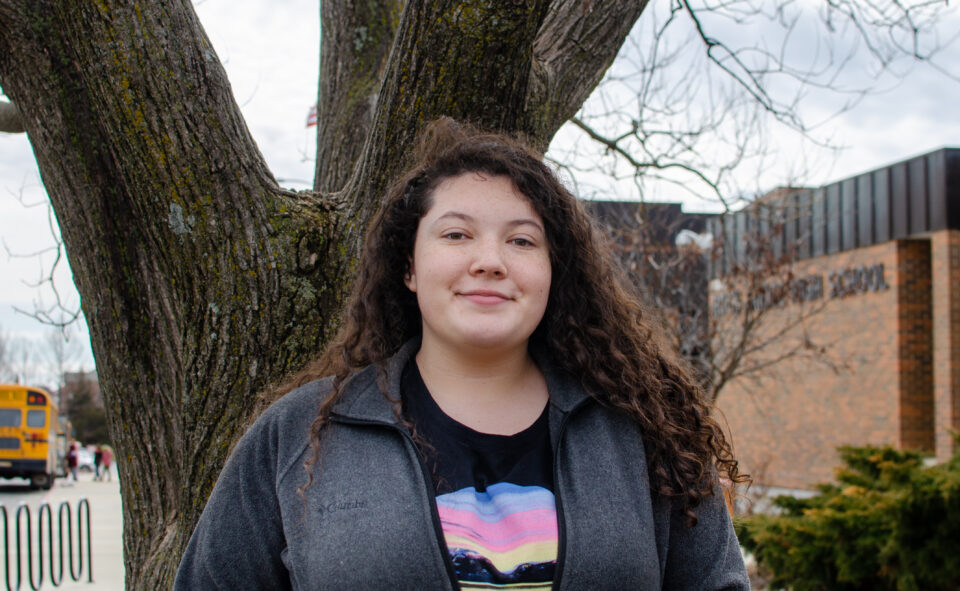 What does it mean to you to be a black person in America today?

It’s a beautiful thing but it’s also kind of a sad thing, because you have this big sense of community within the black community but outwards of that sometimes it’s really hard to find.

In what ways do you see black culture embraced in the world around you?

I would say people embrace what they perceive as black culture which is basically just pop culture. I wouldn’t say that they embrace any struggle, or any triumph, by triumphing I mean like they don’t embrace the come up, pretty much, you know, embrace what black people had to do to grow and to become a part of society and to be seen as people opposed to just black people.

What are some black role models you look up to at Rock Bridge? In general?

Mr. Woods obviously because he does so much for Mac scholars like he really cares about the kids and he really cares about what he’s doing .in life, my mom, for sure. But I know it’s cliche but like Beyoncé Rihanna they do a lot. Chance the Rapper does a lot for education in Chicago. Pretty much everybody in the industry who’s actually doing something for not even just black people but just people being good Samaritans.

What is the role of education in eliminating racism, and what do you think schools could be doing to improve this?

I think they just need to stop trying to focus on the race aspect so much like, yes, it’s important that we are black kids we are ethnic individuals like that’s important to understand and acknowledge, but it’s not the only part of us, we’re more than just diversity in your school. Yeah like I said they just need to stop thinking of it more as just like, oh well you’re diversity in our school. And because we have diversity, this group of kids will see that more and they won’t be racist, but it’s not really that way. They just need to make sure that they’re reprimanding students who show that they’re intolerant and actually make sure that they’re taking those steps to prevent teachers and students who are intolerant to people just because of their race.

Do you feel African American and black history receives fair and equal representation in the classroom? Why or why not?

I think [black history] is acknowledged just to be acknowledged, I think it’s something that a lot of schools just do to check off the checklist and make everybody happy. In the assembly we played that video talking about how the whole point of Black History Month is to not have to celebrate it anymore because ultimately we want people to see that black history is history. It’s not just, oh yeah this is what you guys have done no this is something that is a part of our collective history as people. So I think, like I said, it’s just acknowledged just to be checked off.

What do you think are the biggest challenges facing us in overcoming racial biases and systemic racism?

I would say that it’s hard being an individual dealing with a system, especially when it’s systematic racism because you can’t change that, you can’t change who you are and when you’re in this big system such as school or the workplace, like, there’s so many people ahead of you. That just get to take all these different actions that could either positively benefit you, or go negatively. So it’s hard being that individual because you do feel so small when dealing with that because it is just something that is constantly around you, of just, it’s hard because it’s typically subtle, like, it’s not very blatant in your face. It’s not like how it used to be, where it’s just like, oh yeah we’re a school that doesn’t like black kids. It’s just very subtle and like, it’s something that’s always there that’s just kind of lying under the surface that you just kind of know, and you just try to get over and, you know, overcome.

Who is one person that you think symbolizes black progress in American history?

There’s a lot of people, I mean, similar to what I said with role models like any black individual or person who is advocating for black rights is a part of that. It is a symbol of black progression so anybody that you see in your day to day life who’s in a high position as a black person, or even if they’re in a middle position as long as they’re excelling like that is black progression. Anybody who’s famous just any black person who is striving and trying to succeed as a symbol of black progress.

What do you think about when you hear “Black History Month?”

I think about celebration. I think about remembrance and just thinking of history that’s pretty much what comes to mind.

Was there ever a point that you were ashamed or embarrassed of being black?

So, for me, I’m mixed My mom is mixed. So I’m like 75% 25% so I didn’t even really notice that there was a difference between my mom and I, because I still live in a small town and now uh I know that we were uh considered “one of the good ones”. And then when I moved here in like first grade people started asking me if uh I adopted and stuff like that. And when you get asked that question and stuff like that about your life, it just makes you feel different and like very separate from the group. And so, it’s not necessarily an embarrassment or feeling of being a shame, but it is. It’s not a happy feeling yeah sure when people ask you, well what are you or they question your authenticity like I’ve had so many people tell me that I’m lying about my race, and then they’ll see my mom, they’re like, Oh, well, whatever “that doesn’t count”. So I think it’s different for every black individual, regardless of percentage or well including percentage I mean, because I’m sure it’s different for me being somebody who’s only 25% black, then someone who’s 100% or 50% like that experience is going to be different. But for me, like I said it’s never been something I’m ashamed of but it’s definitely something where I felt like, do I consider myself black or am I not enough to be considered black and stuff like that.

On the other hand, when was a point you were proud of being black?

Pretty much every other day where I’m not feeling that unsettling feeling of like, I don’t know, but being black like I said is a great thing. Like it gives you that great sense of community and when I was growing up and didn’t feel like I was, you know, white enough for the white kids or black enough for the black kids like I had a black family, a community of friends and teachers and peers and stuff, except me and say no. You’re one of us just as much as you are both you are one of us and we accept you. And so I think that that is something that makes me proud to be black, is that the matter where you come from, we accept you like that’s the family, so.