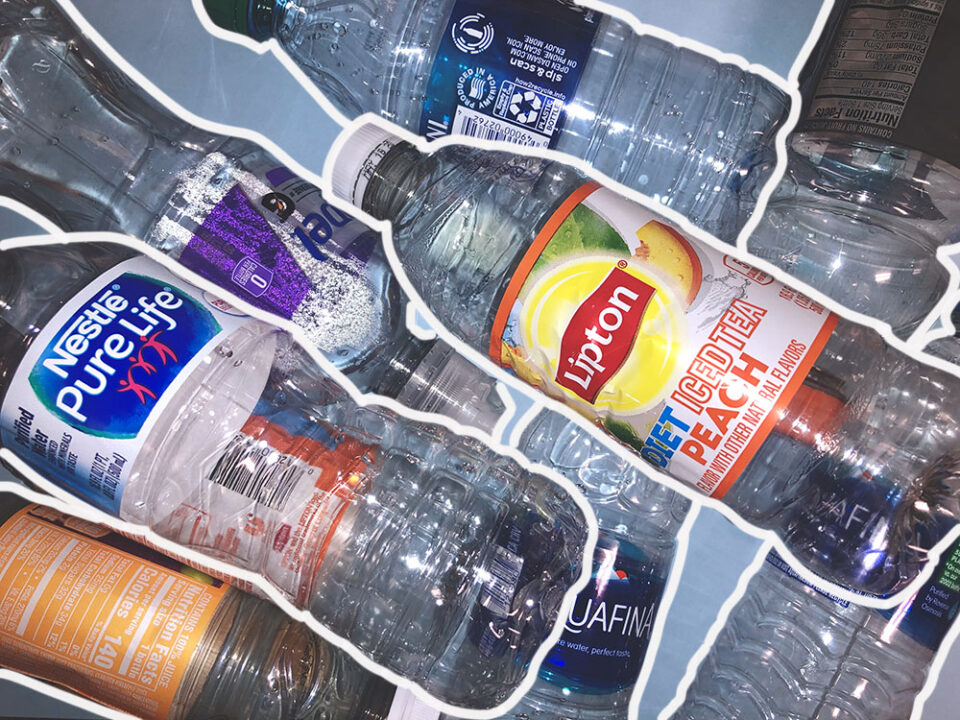 Earlier this year, a Sperm Whale was found dead on a beach in Scotland with a 100kg “‘Huge ball’ of nets, ropes, plastic cups, bags, gloves, packing straps, tubing” in its stomach, according to CBC.

The ocean’s wildlife is unknowingly swallowing the modern man made killer, and the earth is carrying the weight of the ecological consequences. The surface of the planet is melting, once plentiful species are becoming extinct and plastic products have been found in 100 percent of sea turtles. Humans are killing the planet and this issue has gained the concern of several councils and organizations worldwide.

Plastic pollution has become one of the most pressing environmental issues affecting the planet today, according to National Geographic, a global nonprofit organization committed to exploring and protecting the planet. Worldwide, people are producing and discarding single-use plastics by the billions, which contributes greatly to climate change, according to Yale Climate Connections, a media service providing information on the issue.

“Micro-plastic particles in the ocean now outnumber stars in the galaxy; from remote islands, to the Arctic, nowhere is untouched.”

According to the International Union for Conservation of Nature (IUCN), eight million tons of plastic finds its way into the ocean every year making up to 80 percent of all marine debris. In turn, marine species may ingest or get entangled in debris which can result in severe injuries or death. In 2018, the European Commission, the executive branch of the European Union (EU), erected the European Strategy for Plastics in a circular economy plan to help stop plastic pollution in the EU. Major companies such as Ikea and Starbucks have supported this plan in an effort to limit the amount of plastic waste from their businesses.

Many have changed daily habits after learning about plastic’s negative consequences, Junior Bet Menen said. “My mom and I used to buy the big packaged plastic water bottles that come in bulk that you can buy at the stores but we no longer do that and now we only buy one jug … and we just refill that up with water so that we don’t use as [many] plastic water bottles.”

Along with bursts in social activism, internet trends have emerged promoting the use of metal straws over plastic ones to “save the turtles.” Many companies worldwide have attempted abandoning unnecessary plastic items by pledging to ban, or greatly limit, the distribution of plastic straws including American Airlines, Disney and Starbucks.

“I have metal straws that I use … We [also]  have biodegradable ones at home,” Freshman Sariah Britton said. She doesn’t use plastic straws because there are other more environmentally friendly alternatives available to her.

The recently popular company Hydro Flask has also made significant strides in protecting the environment by minimizing the use of plastic water bottles through eco-friendly insulated drinkware. Freshman Tayla Prenger said she switched to eco-friendly drinkware because it was an easy switch that she felt was important to make.

“I usually use plastic water bottles, but I feel like I shouldn’t,” Prenger said. “So, I got a Hydro Flask and now my water is cold and I feel like I am helping the environment.”

I usually use plastic water bottles, but I feel like I shouldn’t.”

“Etsy, which has over 4,000 reusable straws available for purchase, including ones made of glass and ceramic, has seen a 198 percent increase in search volume for the term [metal straws] over the past year,” an April article by a leading digital media company said. The company also mentioned that popular YouTube content creator Jeffree Star, with over 16 million subscribers, has released packs of metal straws for sale from his name brand, Jeffree Star.

Not only is the world tackling the straw epidemic, but 349 cities in the U.S., including Seattle and San Diego, have taken governmental action and banned or taxed plastic bags, according to Forbes, a global media company an American magazine. Menen believes that a change in society’s misuse of plastic needs to start in government.

“It’s not the individual, [because] they’re just benefiting from it. They’re just consuming it, they’re not the ones making [single-use plastics],” Menen said. “I feel like companies need to have better policies and the government should implement more restrictions on the use of non-renewable and non-recyclable items. I just think it [will] take a little bit more adapting, and I think that’s where we struggle with finding that middle ground where the companies are still making a profit. They’re still not losing money, but they’re also not actively harming the environment.”

RBHS French teacher Susan Descamps said the government should give corporations incentives to limit their plastic waste. Descamps said changes to aid in the plastic waste crisis must be initiated by nationwide policy in order to really make an impact.

“Companies can [only] do so much but when it comes from a top-down kind of thing, I think that would be more effective. I think maybe the government could give companies incentives to provide those incentives for the people,” Descamps said. “Like once upon a time ago, every time you bought a bottle of coke in a glass bottle, you paid a five-cent deposit, and when you brought the empty bottle back you got your five cents back, so there was that incentive to recycle the stuff. So we need to be doing that. Definitely not [dumping it] into the oceans.”

“Once upon a time ago, every time you bought a bottle of coke in a glass bottle, you paid a five-cent deposit, and when you brought the empty bottle back you got your five cents back, so there was that incentive to recycle the stuff.”

The effects of single-use plastics on the environment, however, reach further than merely oceans. In May, the Center for International Environmental Law (CIEL) published a study entitled “Plastic & Climate: The Hidden Costs of a Plastic Planet,” in which the organization examined the major causes of climate change. The account paints a grim picture of the world today: plastic waste and litter threatens our planet and directly influences the detriments of climate change.

“Plastic is one of the most ubiquitous materials in the economy and among the most pervasive and persistent pollutants on Earth,” the study said. “It has become an inescapable part of the material world, flowing constantly through the human experience from plastic bottles, bags, food packaging, clothing to prosthetics, car parts, and construction materials.”

Freshman Saloni Chaurasia says that she tries to limit her individual plastic waste as a small act to impact the large scale problem at hand.

“The initiatives we have right now aren’t working,” Chaurasia said. “We still have tons of trash and stuff, not even just in the ocean, but also landfills have a lot of non-compostable, non-degradable trash in them. So there definitely needs to be more of an initiative, and people need to be involved more and start caring.”

Young people believe they do not think they can make a big enough impact to really improve the state of today’s environment because big corporations have so much control over how people use plastics.

“I just feel like if I’m the only one that doesn’t use plastic it’s not going to matter because everyone else is still using plastic,” freshman Lily Dudley said.

Businesses, such as Walt Disney Company and McDonald’s, have debated whether or not it would be necessary for them to stop using single-use plastics in their corporations, according to Reader’s Digest, an American magazine. Businesses use and waste lots of single-use plastics because they are cheap and easily accessible. It is difficult for companies to ignore the issue of the environment without losing business, according to the United Nations (UN) Environment Programme, a program that covers meetings and major events in the UN, and lots of industries are planning to stop using single-use plastics.

“I just feel like if I’m the only one that doesn’t use plastic it’s not going to matter because everyone else is still using plastic.”

Freshmen Kaylen Rush said, “I try not to use straws. If I use plastic I try to always recycle it.” and agrees that companies must stop mass-producing plastic materials that people will only use for minutes or hours before they throw them away.

Ben Kreitner, the Waste Minimization Coordinator at the Office of Sustainability in Columbia, MO, said it is important for everyone to try and contribute to helping the environment. Kreitner said any steps people take in order to reduce plastic waste is a move in the right direction.

“Students can have a major impact on local sustainability issues,” Kreitner said. “They can write articles in the school newspaper, join a green team or environmental club and write letters to the school principal or Board of Education. Most importantly, students [can] ask their parents about recycling at home or starting a compost pile for uneaten or expired food.”

Kreitner also encourages students to take the time to ensure they are recycling correctly. The job involves cautiously sorting recyclable products and never throwing it in the garbage, he said. Kreitner said changing one’s normal habits is worth it if it means that he or she is helping the environment.

“Even if [recycling] is not as convenient,” Chaurasia said, “it’s something you have to adapt to eventually.”

The issue of climate change is worldwide and having dramatic effects on the world’s natural environment. Although plastic waste is only one source at the root of the problem, it’s something each and every individual on the planet can be more aware of in limiting further effects. Having good intentions and becoming more knowledgeable on the topic will place mankind in better hands. Kreitner said, however, that it will be difficult to make an impact immediately.

“It is very difficult to have a complete ban on single-use plastics within a community,” Kreitner said. “It is most important to focus on businesses, churches, schools and special events when trying to reduce plastic waste.”

What steps are you taking to reduce waste? Let us know in the comments below.

Freshman Allison Kim is part of the Rock Bridge Cross Country team and plays the violin for Chamber Orchestra. She...
View all posts

Emma Kimchi is a freshman at Rock Bridge High School. She is on the freshman volleyball team. In her free...
View all posts
previous post