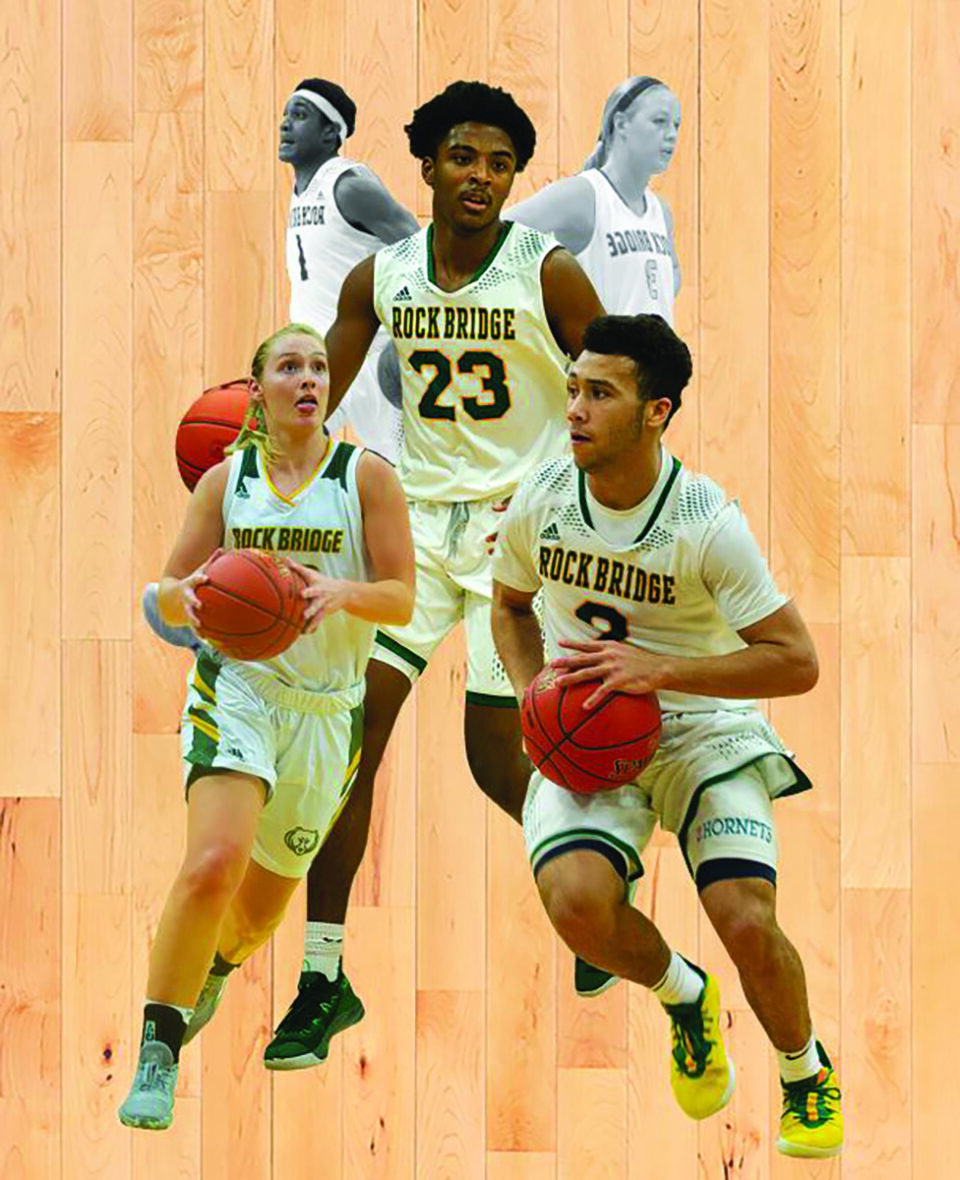 On March 16, 2019, a coach with 30 years of experience and a hungry group of boys, six a part of the Class of 2019, came together when the Bruin boys’ basketball team made history in Springfield, seizing the state championship title for the first time in school history.

Down eight points going into the second half, the Bruins surged back to defeat Christian Brothers College High School. Senior Jacob Ungles, then a junior, scored two points in the championship game and said the vastness of the arena was most nerve racking for him. Returning to the locker room after the legendary finish, Ungles recalls senior Grant Hajicek, then a junior also, dumping a Gatorade tub of water on head coach Jim Scanlon’s head.

RBHS has eight Final Four appearances overall but only one championship game appearance. After last season, RBHS became the first public school in Missouri since 1962 to win a state title in Class 5 basketball, improving on their third place finish the previous year. The team also became the only Class 5 Final Four returner, which added even more experience to a vengeful group going into the next season. To further their lengthy resume, the Bruins have won three straight district championships and, in the last 16-17 years, have won the district championship eight or nine times, assistant coach Blair Scanlon said. He also said the boys have won more than 20 games in all but two seasons over the last 16 years.

“Last year we were straight focused on winning because we knew we could do it,” Ungles said. “So this year we just kind of stayed in that mentality even more than that.”

All of the graduates played together since middle school, and finishing their high school careers with a state title was the perfect way to say goodbye. Even though a talented group of boys left RBHS last May, they left behind veteran, ambitious players.

“The past players, they just had more experience than we have right now. It’s a lot younger of a team than we had, and a bunch of those guys had skills that you see once every few years in a school like this, and we had three to five of them on one team,” Ungles said. “We just don’t have the offense that we used to have and the scoring ability that we used to have. So this year it’s a lot more defensively focused and just doing the simple things right.”

Ungles said it was difficult to follow the example the seniors before him left but he has enjoyed filling an important leadership role on the court by being a voice the younger players listen to. He said he focuses on “making everybody better,” not just himself, a key tactic for a winning mindset. Additionally, he said both Jim and Blair Scanlon’s experience will help the team continue to succeed.

“Last year [the current seniors] were just in reserved roles where they weren’t playing as many minutes but now those guys who were in the back-up roles are playing major minutes and major roles for us. I think it took a little bit to adjust to that because they weren’t used to it. They’ve handled it, and guys have stepped up and made plays and done a really good job and not just with the stats part but with leadership and mentality and stuff like that,” Blair Scanlon said. “They’ve handled it really well.”

“As a team, our goal is really just to win the district championship again and then just to have fun and get better as the season goes on.”

Following an achievement like a state title is difficult, Ungles said, but focusing on “one game at a time” and working toward the postseason alleviates some of that pressure. Ungles said people suspected the team wasn’t going to be as good based on the state of the team after losing players, but they needed to realize there were some talented returners including himself, junior Xavier Sykes and seniors Brant Bowers and Charles Wilson.

“As a team, our goal is really just to win the district championship again and then just to have fun and get better as the season goes on,” Ungles said. “It’s a goal to play in college, and I’ve gotten the chance to have people see me.”

Doubt is a major motivating factor this season, Blair Scanlon said. He said his team knew other schools believed they would drop down this year, but Blair Scanlon hopes the team will come back strong with each player’s support. He said it was beneficial for the seniors to have people doubting them in order to “prove them wrong.”

“[RBHS has] one of the top programs in the state every year, and that’s attributed to [help from] coaches and players and parents,” Blair Scanlon said. “I think every year is a different challenge because you have different groups, but our six seniors have really done the job this year listening, following the game plan, working and [blocking out the negative notions] has motivated them to play better.”

Like the boys, the girls’ basketball team also carries excellence in the form of state titles. Having won five Class 5 championships in 2008 and 2012-15, four of which were consecutive, the Bruins enjoy continuous prestige.

Currently, the team is ranked fourth in the state behind Incarnate Word Academy (St. Louis), Liberty High School and Jefferson City High School.
Looking forward to the rest of the season, head coach Jill Nagel helps lead her players to success as an involved and vocal mentor. Nagel began coaching the team in 2005.

“We talk a lot about the process. You have to do steps A, B and C before you can get to being [good] enough, and so we really focus a lot on the process and taking it one step at a time. There’s steps that you have to take in order to get to the end,” Nagel said. “So just really focusing on the fundamentals, and we try to never overlook that every single day in practice and then [make] sure that we’re as prepared as we can be for every opponent that we play.”

“We talk a lot about the process. You have to do steps A, B and C before you can get to being [good] enough, and so we really focus a lot on the process and taking it one step at a time.”

Preparation is key to success, and practicing beneath the numerous green and gold state championship banners constantly reminds the girls of past accomplishments. From 2011-2015, RBHS witnessed history in the form of a few talented female basketball players including Sophie and Lindsey Cunningham and Cierra and Bri Porter. Sophie Cunningham and Cierra Porter both carried the weight of four first place medals around their necks at the time of their high school graduation. All four girls continued their athletic careers at the University of Missouri — Columbia and, after graduating from college, Sophie Cunningham went on to play professionally for the Phoenix Mercury. Nagel said, however, thinking about the past will not benefit her team in the future.

“I think the past is in the rearview mirror. I think it’s great to have tradition, and we always say tradition never graduates. You definitely hope that the kids want to continue on that tradition, but you want them to do it for themselves and for their teammates and not just because of the past players,” Nagel said. “There has to be an intrinsic aspect to it for each player, otherwise it’s not going to be meaningful for them in the end.”

Looking forward is the best way for the team to succeed, Nagel said, and this season consists of even more collegiate commits, including senior Eryn Puett, Missouri University of Science and Technology, and sophomore Averi Kroenke, University of Missouri — Columbia. Although the team is different from past years, Nagel said being able to coach new kids and “see all the pieces of the puzzle come together” is exciting.

“I think this year we just get along so much better,” Puett, a previous Class 5 All-State selection, said. “Everyone is really close, and since we are all so close it allows us to work together and play really well.”

The varsity lineup traveled to Florida over holiday break to strengthen their bond, playing against highly competitive teams. The Bruins went 1-2 at the Naples Holiday Shootout in Naples, Florida. Following in the footsteps of the girls before her, Puett aspires to hold a first-place championship trophy in March.
She said the Bruins have a “very good chance” of making it to state if they continue to work together.

“Everyone is really close, and since we are all so close it allows us to work together and play really well.”

“It gets nerve racking going into postseason because if you lose you’re done, and that’s a lot of pressure each game,” Puett said. “Last year’s loss in quarterfinals was very disappointing, and I’m excited to see what we can do this year.”
Last season, the Bruins brought home a district championship title, but a loss to Republic High School ended their Final Four potential. Girls’ basketball is 15-4 on the season, with district play starting March 2.

The best part about this year’s team, Nagel said, is how distinct each of her players is, something she thinks will bode well as the season becomes more competitive. Each player, she said, is talented and works well with one another which makes the girls difficult for other teams to keep up with in gametime. She said their personalities and playing staples are individualistic in comparison to other teams they’ve played.

“We’ve got nine kids on varsity, primarily, and they’re all very unique in their own great ways, and I think that’s what makes us really special, and I think it’s what makes us hard to guard because everybody kind of has a unique aspect that they can bring to the game. And it’s not just one person,” Nagel said. “We have a different leading scorer about every game, and that’s the other thing that I think is unique about them and special. It’s not just dependent on one or two people.”

What are your thoughts on the teams’ seasons so far? Let us know in the comments below.