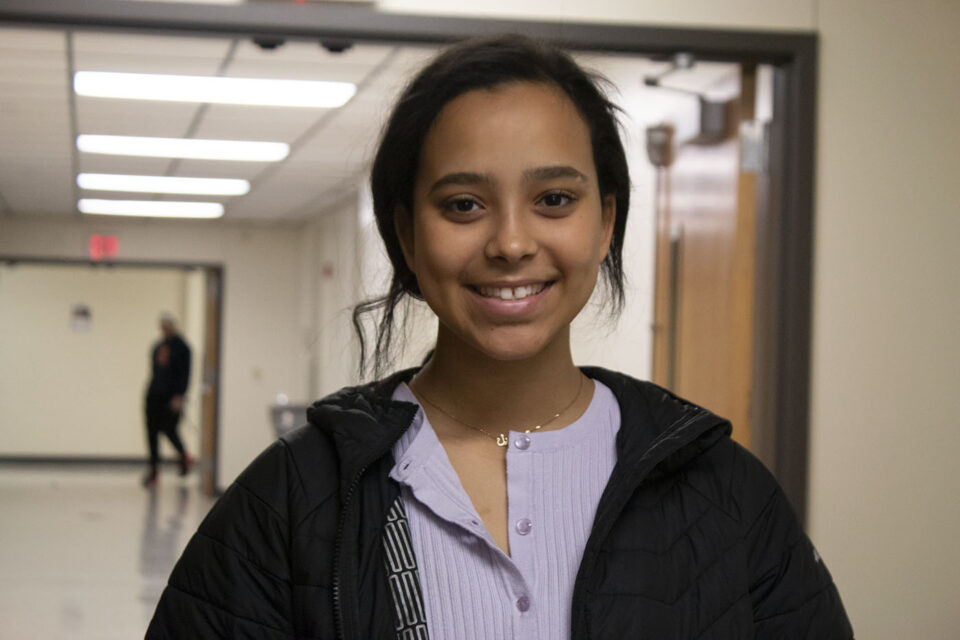 What does it mean to be a black person in America today?

In what ways do you see black culture embraced in the world around you? In what ways is it rejected?

“Rap and R&B culture is more popular in our generation, which is a good thing. We’re doing a great job of embracing black culture in that respect, but I think there’s definitely some stereotypes still out there that reject our culture.”

What do you think are the biggest challenges facing us in overcoming racial biases and systemic racism?

“I’m friends with a lot of people with different ethnicities, so I never felt pressure to be like a certain person. If you’re surrounded by the same type of people, you’ll kinda mold yourself to be more like them. I guess what I’m saying is everyone should feel comfortable enough to be themselves. Exposure to diverse ethnicities and personalities is a really important part of all of that.”

How can or should governmental organizations take action to address racial tensions in America?

“Just by making sure everyone feels included regardless of race. I don’t think there’s an overwhelming sense of inequality, at least in today’s age. [Our generation is] doing pretty good at promoting equality.”

What is the role of education in eliminating racism, and what do you think schools could be doing to improve this?

“I feel like the more education people have, the more capable they become of seeing the bigger picture and becoming more open-minded. Better education — not just relating to black history, but just teaching through a variety of viewpoints and promoting respect — can really open people’s eyes. Schools could probably improve by encouraging kids to take classes that challenge their way of thinking.”

Do you feel African American and black history receives fair and equal representation in the classroom? Why or why not?

“I think today I see a pretty fair amount of representation of our history. It’s definitely highlighted in some of my classes. The fact that we’re taking time in the morning to talk about ‘Black History Moments’ is pretty good. It’s nice to be able to pause and reflect on the past because I know this month wasn’t always something that was visible in schools.”

What do you wish could change about Rock Bridge in that regard?

“I think our school does a really good job with where we’re at.”

What do the school and the students do well when addressing and discussing race and discrimination? What still needs to be improved?

“I quite honestly don’t see a whole lot of racial discrimination, at least at Rock Bridge, so I guess that means our school is doing a good job of handling it.”

When in your life have you experienced racism? What form did this take, and how did you respond?

“Luckily, I’ve never experienced anything aggressive or violent, but I think there definitely was a time in fifth grade where these two African American girls came up to me and questioned me about how my mom is white and my dad is African, and they just seemed really judgmental about it. I was kinda shocked because I’d never gotten questions like that before, but I just kinda nodded and dropped the issue.”

How have race relations in America affected you and your family now and in the past?

“My family and I really haven’t experienced much racism. We haven’t really been discriminated against or anything. We’re treated pretty normally. I know my dad will look at the news from time to time and get kind of upset about the racist things going on out there, but I don’t think he’s ever experienced any discrimination or anything. My family doesn’t really experience that type of thing, but it’s definitely still out there.”

How do implicit and explicit bias and stereotypes impact your sense of self and life in general?

“I feel like different ethnicities are starting to be ignored, and your skin color doesn’t define you as much as it used to. With my diverse friend group, I haven’t ever felt less than because of my race. I feel like anyone can be friends regardless of race.”

As a young person in today’s society, what steps still need to be taken in regard to the way people of different races or ethnicities interact?

“Our society is in a good place as of right now. We should continue to treat everyone with the same respect and stand up for what’s just.”

Where do you see racism in RBHS and in the community? Let us know in the comments below.


In their home opener game, the Bruins kicked off t

We released our first issue of Southpaw of the yea