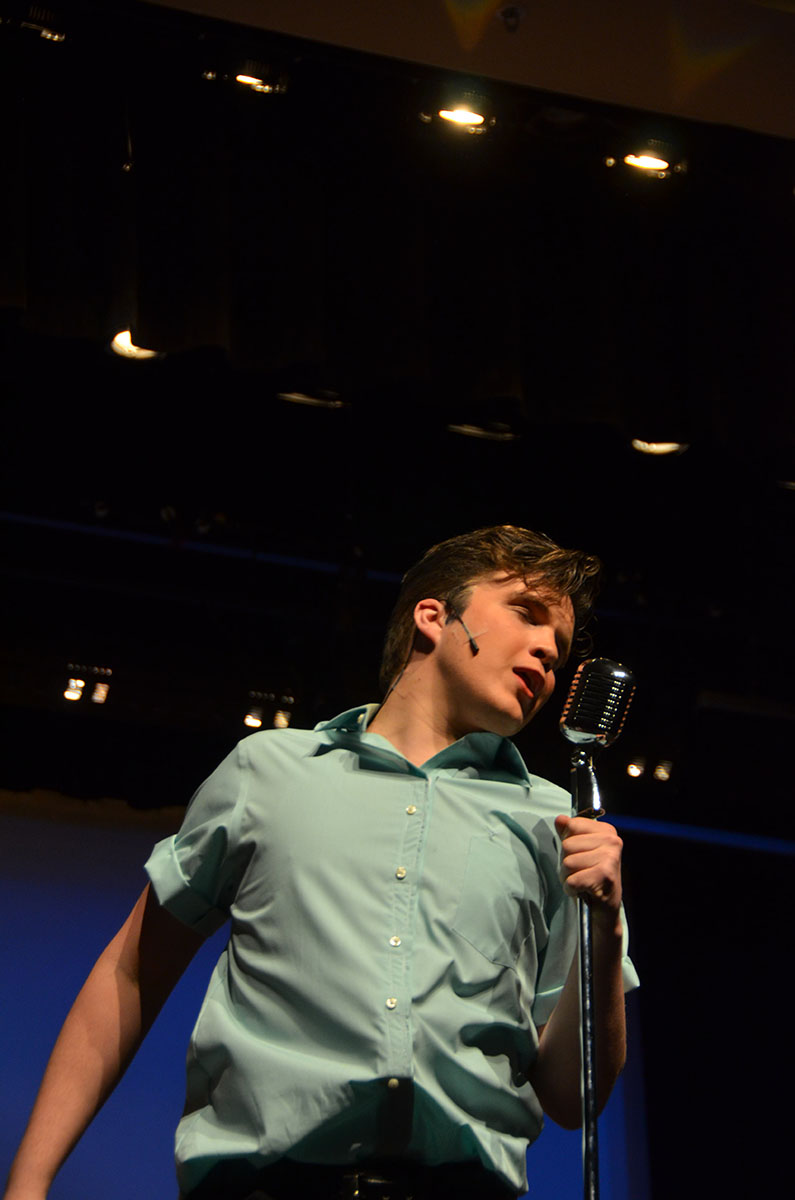 Through television shows and movies such as “Glee” and “Pitch Perfect,” show choir has thrusted itself into popular media. As media company CNN reported in 2010, “singing is cool again” by the “Glee effect.” RBHS show choir Director Mike Pierson said, however, the performance’s rich history extends far before media like “Glee.”

While there is a loose timeline for the arrival of high school show choir, it officially began in the 1960s, emerging in the Midwest first and starting at RBHS in 1988. The inspiration for show choir are widely credited to “America’s Singing Master” Fred Waring and his dance band “Pennsylvanians,” which launched in 1918, according to freelance director Michael Weaver’s page. The group is famous by their vocal and visual acts, as well as for their embracement of new technology from the radio to the first television. Especially as the 1950s golden age for the screen approached, artists and bands required visual performance aspects, from eye-catching dance moves to humorous facial expressions to mesmerizing costumes, all of which make up the essence of show choir.

Pierson, who has been the director for more than 15 years, said series such as “Glee,” while helpful in elevating interest in show choir, are not accurate to the real process. In “Glee,” new arrangements with the latest popular song hatch spontaneously every episode. Pierson said the activity demands much more thorough planning that typically starts in May or June, when Pierson conducts auditions. The choreography, he said, isn’t threaded in air but carefully constructed.

“If you don’t actually like what you’re doing, or, like, put your heart and soul into something, you won’t enjoy it, and actually enjoying it really helps you express yourself on stage.”

Satin n’ Lace, the all-girls choir, and Bright City Lights, the mixed gender choir began practicing its show since August and twirled into competition season in late January. Senior Lindsey Smith said the program is time-consuming but absolutely worth it. Because she is a part of both shows, she practices every morning for an hour as well as several days after school for four hours. Smith said the dynamic nature of show choir keeps the experience interesting and serves as a valuable learning tool beyond technical performance.

“[Show choir] taught me discipline … because in rehearsal you need to be focused; you need to be ready to change things instantly,” Smith said. “Like one of the years, one of our soloists got kicked out the week before competition, so we obviously have to be flexible.”

Senior Katherine Chrisman, along with Smith, said the education show choir provides extends further than singing, dancing and other forms of stage expression. She said the experience imparted to her deep lessons about “being in a group, teamwork, listening to other people and taking care of each other.”

“Show choir can be hard sometimes because you are with the same people every day,” Chrisman said. “So you can either have a really good time together and be really close or sometimes you can be really toxic towards each other, and it’s like living in a house together, and you kind of have to learn how to live with each other.”

Smith said during her freshman year she surrounded herself in drama and has since learned to be more professional after realizing, “I don’t have time for that.” She said she tries to give genuine compliments to her peers, rather than mulling in negativity. Pierson said he hopes to train students to be better citizens through the program. By stepping outside of their comfort zone on the stage, Pierson sees students become leaders who will achieve major career feats after high school from professional singing and acting to becoming newscasters and doctors.

“They’re going to learn to work with people that they may not see eye to eye with, but guess what, in the real world, you have to do that with the people you work with, too,” Pierson said.

They’re going to learn to work with people that they may not see eye to eye with, but guess what, in the real world, you have to do that with the people you work with, too.”

Not only do practical life skills come into play in the activity, Pierson also said the “total synthesis of singing, movement, acting [and] professionalism” fosters self belief. Coming into her freshman year, Chrisman said she suffered from a negative perception of her body-image. She said her friends in show choir made her feel comfortable, and it’s this caring atmosphere she wants to further enhance as a role model to the younger members.

“I have always struggled with my weight, and freshman year one of my friends really encouraged me to do [show choir],” Chrisman said. “And I just found my groove and progressively just started losing weight, out of dancing so much, and I lost 30 pounds my freshman year. Not only has it helped me with friends and stuff, it has also helped me with my self-confidence.”

Although each show choir contains dozens of other students, Pierson said it’s important for each member to own the stage with conviction, especially for independent roles. Sophomore Ella McGinty received her first solo performance this year. While she has sung in choir throughout her schooling, McGinty said she was nervously excited for the opportunity. She said before each show a wave of uncertainty and doubt wash over her, making her think, “I’m going to forget everything up there.” When the moment comes, though, she said she’s always able to perform and is working toward calming her nightmarish imagination and being more “realistic” before the stage.

Senior Jack Buckley also has a prominent solo role. He plays Elvis Presley in Bright City Lights’ Presley Palooza show. Buckley said the show revolves around the Presley’s lifetime, featuring his iconic dance moves like “The Pevis,” evolution of song from religious anthems to Rock ‘n’ Roll and ending with a contemporary performance of “Viva Las Vegas.” For the first half of the show, Buckley is dressed in a white, popping outfit that stands out from his peers as he swings his hips and shakes his knees like the “King of Rock ‘n’ Roll.” By the end of his solo, he’s shining in sweat and a signature smile.

Like Buckley, Smith said the public shows make the relentless behind the scenes effort worth it. In both choirs, Smith dances in the front row, in beat and constantly changing the emotion of her face; she is almost never stuck with a stagnant form.

“I make sure that I actually have fun on stage,” Smith said. “If you don’t actually enjoy what you’re doing, or, like, put your heart and soul into something, you won’t enjoy it, and actually enjoying it really helps you express yourself on stage.”

Pierson said he remembers years when the choirs had a perfect record, such as 2007 when both choirs earned a finals spot at every competition, and one RBHS choir would achieve the ultimate Grand Champion title, which is given to one choir every competition. While Pierson said the gratification from the crowd or the colossal trophies may entice many of his students, he finds meaning in the activity before the moments of triumph.

“It’s not the competitions. For me, it’s the rehearsals when everybody is dialed in and really, really looking to develop their own performance,” Pierson said. “The group gelling as a whole and seeing the dream come to life, whether that’s character development or whether that’s the singing development or polishing off the choreography [is the best part], when you see all of that start to come together and the students get excited about what they’re doing.”

“It’s nice to be in something with people who all appreciate the same things that you do.”

Pierson said the chemistry of the team builds from the first day back to school. In the beginning of the school year, he said there is a lot of intentional meshing such as icebreakers, but as the year progresses and students “travel together, spend early mornings and late nights together, they develop a bond.”

Especially during competition season, Chrisman said the experience is exhausting, and the experience is only achievable with friends. She calls the day after an invitation “show choir hangover,” when students sleep through the entire day after a competition. Chrisman, Buckely, Smith and McGinty all said show choir has dominated their school and extracurricular life. The members are constantly around each other and thinking about their performance.

“[Members of show choir] are all really accepting and really nice to each other,” McGinty said. “And it’s nice to be in something with people who all appreciate the same things that you do.”

Buckley and Smith said friendships extend beyond their choir, and they’ve also connected with singers of different groups across the nation.

“I have friends all over the state, and people in Iowa that I know I never would have met if it wasn’t for show choir,” Buckley said.

Smith said, while she’s attained dozens relationships because of the performances, the most meaningful one to her is her closeness to the RBHS’s costume designer Victoria Mongillio.

“I have spent so much time in the costume shop, helping with the costumes and just talking to the costumer,” Smith said. “She has been such an amazing person throughout my entire four years. She’s easily my second mom.”

For around 60 in the 2,000 member student body, Pierson said show choir becomes their home in the school. While there is always some sort of drama and more work to do, Pierson said the commitment molds a tight knit community, one that Buckley said he’s never regretted being a part of.

“When you first start high school, you meet all these new people, and some of your [middle school] friends, like if you don’t have classes with them, you barely see them,” Buckley said. “So it’s nice to have all these people right there that you can go to, and, like, we’re all friends together; we all love each other.”

What has been your favorite show choir theme so far? Let us know in the comments below