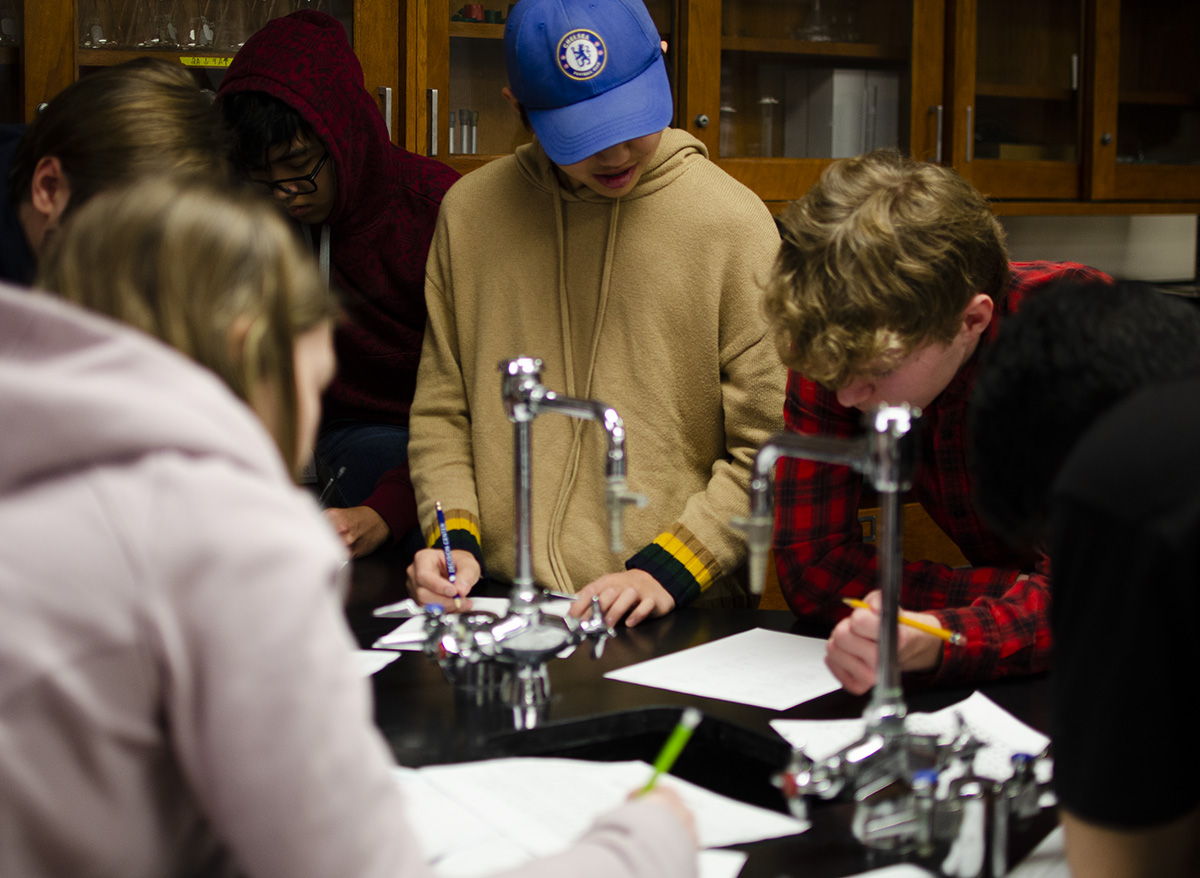 Columbia Public Schools (CPS) is reforming its grading system to move toward Standards-Referenced Grading (SRG), Superintendent Dr. Peter Stiepleman said. While CPS elementary and middle schools are phasing in SRG during the 2020-21 school year, high schools aim to use SRG by the 2022-23 school year, Dr. Stiepleman said; however, this timeline may adjust based on feedback from teacher leaders, principals, educational coordinators and parents “in the process to ensure understanding and clarity.”

Dr. Stiepleman said the idea of SRG came up more than six years ago and contributes to his goal of being Fair, Accurate, Specific and Timely (FAST). He hopes SRG helps “develop a clear plan for reaching success,” one that limits subjectivity, grades on achievement and is consistent among teachers.

“As CPS lives our Achievement, Enrichment and Opportunity mission of providing an excellent education for all students, it is very important we are working to ensure grading practices are equitable across building and grade levels throughout our 19,000+ student district,” Dr. Stiepleman said. “At the heart, we at CPS believe grades should communicate what students know and are able to do.”

Because the jump to SRG requires major reformations to the current grading system, especially in high schools where grades matter more than before, Dr. Stiepleman said to cushion the change CPS teachers have been collaborating on specific steps they can take to achieve more common grading practices across schools. 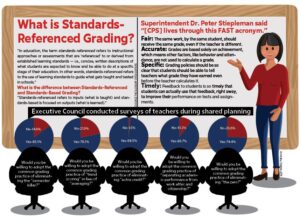 At RBHS, the Executive Council is a governance body consisting of six faculty members. Civics Studies teacher and Executive Council chair Benjamin Niewoehner said it exists so the principal and administrators are making decisions “in conjunction with teachers who have been elected to serve,” not in isolation. Beginning this year, he said the Council has prioritized studying common grading practices in its shared planning, where teachers in interdisciplinary areas collaborate every month.

“I think as a faculty we’re at the understanding that we like a lot of the ideas that SRG has to offer. We don’t necessarily know how to implement them with fidelity, [however,] and we don’t know what that looks like for our current teaching practices,” Niewoehner said. “Some people might say the easiest thing is the best thing, but some people might recognize that maybe the best thing isn’t always the easiest conversation to have.”

The Executive Council has narrowed next year’s implementation plans to four of the six possibilities from the handbook: eliminating the “semester killer,” “the zero,” extra credit and “separating academic performance from work ethic and citizenship.” Niewoehner said the faculty will certainly take at least one, and every idea has a majority approval rate with exact breakdowns shown above. While most teachers are “willing to adopt the common grading practice,” many still have questions about the ideas, which are in the comment section of the survey. In brief, common negative responses included, “We are not ready,” “is switching ‘better’ or simply ‘different’” and general confusion over the framing of the grading practice.

“It’s hard to get people to change their practices, rightfully so,” Niewoehner said. “We all come from different age groups. We’ve all had different backgrounds in education; different philosophies have made their way through different collegiate programs of how to become an effective educator, and so we’re trying to wrestle with all of those things.”

Still, Dr. Stiepleman said SRG is inevitable for the school district even if the “when” is hard to define. He said SRG will better prepare students for life beyond high school by making them “critical partners in the learning process.” 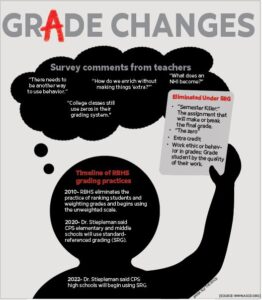 “Students are able to communicate the learning goal and work with the teacher to goal set for meeting the target,” Dr. Stiepleman said. “SRG works to prepare students to be critical thinkers, problem solvers and learners that are able to assess where they are in a process and develop a clear plan for reaching success.”
While seeing its intention, junior Anna Batten said SRG is too narrow of a grading scale and may limit educators’ ability to teach students beyond the curriculum. She said SRG doesn’t allow for individuality of teaching styles.

“I just don’t think that for every single subject you can put it on the same grading scale because every subject is so different and has their own ins and outs, so you can’t really fit them into the same thing,” Batten said. “And teachers are all different, too. They all have different ways they want to teach and grade things.”

While Batten said the benefits do not mask the downsides of decreased flexibility, sophomore Carson Dale said the dependability of SRG makes it worthwhile. Dale said he preferred when SRG was used in his eighth grade Gifted Program class as well as in his freshmen Civics class.

“I thought it helped to ensure student success because it shows them exactly where they are struggling. It doesn’t just give them a holistic grade, but it gives them specific grades on specific things,” Dale said. “So, like, if a student was struggling with contextualization or your thesis, they know specifically what they need to work on.”

Because current high schoolers haven’t had a majority of classes use SRG, Dr. Stiepleman said the transition would be easier for the younger students who’ve grown up with SRG. The next step, he said, is getting high school teachers to utilize the scale. Niewoehner said RBHS is collectively moving in that direction.

“Rock Bridge is a really special place where top-down decisions aren’t welcomed with open arms,” Niewoehner said. “So even though people ask for it, I don’t know that [administration] can just make a top-down decision. I think it might have to come from some sort of majority vote, you know, the way we do a lot of things in a democracy.”

Do you think SRG is a good idea? Let us know in the comments below.