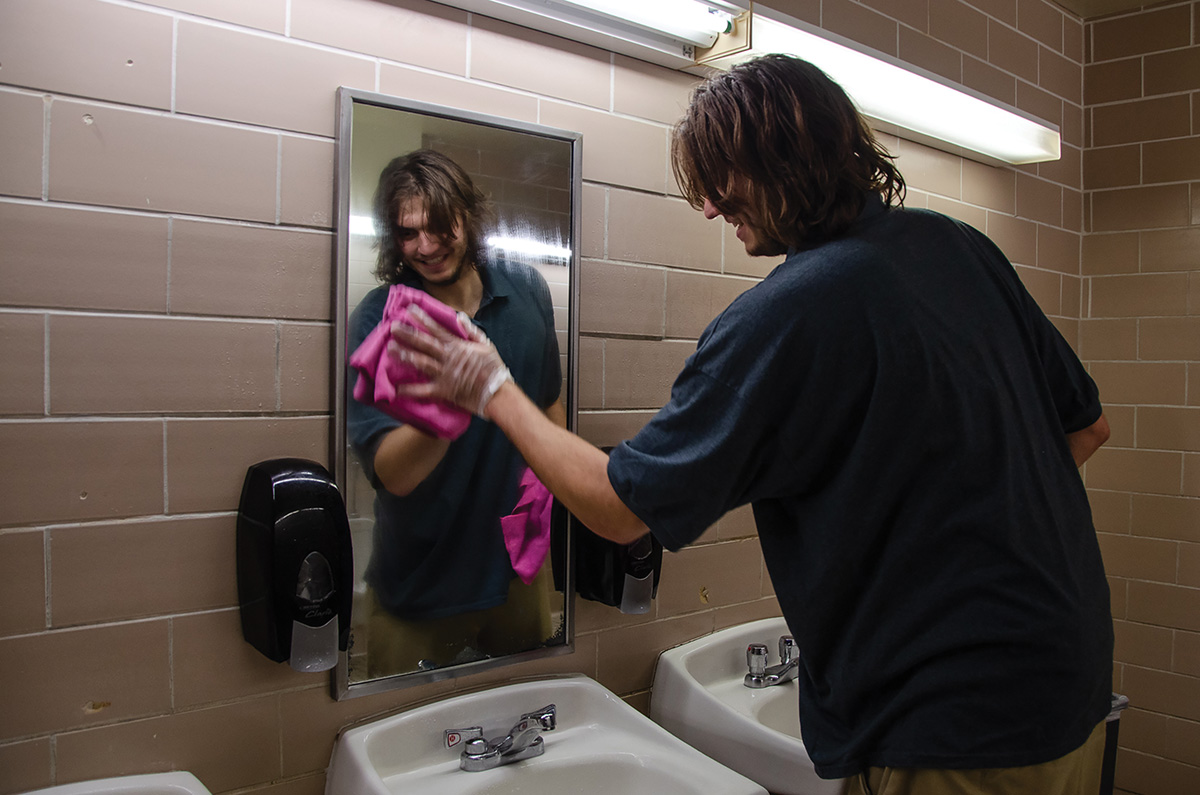 Repeated vandalism in school bathrooms, particularly boys’ bathrooms, forced RBHS to spend more than $10,000 on labor and materials to replace and repair damaged property, as estimated by Assistant principal Dr. Tim Baker. In the wake of recent incidents, including students ripping down the stall walls, smashing soap dispensers and scrawling obscene images onto the wall, RBHS administration closed the Auxiliary Gym and band hallway bathrooms until the school can repair the damages.

RBHS principal Jacob Sirna said he hopes limiting available bathrooms  will discourage future vandalism by increasing the number of students within the bathrooms at any given time. Baker said this year ushered in an unprecedented amount of defacement, and with it record spending on restoration.

“I don’t want to say it was nonexistent before this year, but it was virtually nonexistent. There would be a towel dispenser broken, maybe it was vandalized, but it was so rare,” Dr. Baker said. “Now it’s every bathroom, all the time, it’s just become an enormous issue.”

The Student Handbook for Columbia Public Schools (CPS) defines vandalism as the willful damage or the attempt to cause damage to physical or personal property belonging to the school, staff or students. Junior Josh Froidl said he noticed more destruction and vandalism within school bathrooms this year than in years past. He said he observes the aftermath of some form of destruction in the boys’ bathrooms nearly every day.

“It varies on a day-to-day basis. You never really know what you’re going to get” Froidl said. “You see things like writing on the wall or broken things such as soap dispensers. Usually there is a mess on the floor, too.”

RBHS school custodian Sean Jones, who has been responsible for cleaning several bathrooms after students vandalized them, said disinfecting bathrooms and property after students deface them makes her job significantly more difficult.

“[The custodial staff] has to wipe up all the mess and stuff on the floor and everything. It depends on how bad they mess it up, but sometimes when there’s stuff on the wall we have to scrub it off,” Jones said. “It’s just so disrespectful to the people cleaning and your school and everyone.”

The RBHS Student Handbook states students who vandalize or misuse school property are eligible for detention or even suspension depending on the severity and scope of the destruction. Baker said RBHS administration may require anyone responsible to cover the cost of fixing damages.

A liquid soap dispenser in the studies hall bathroom was one of many missing from or broken in the boys’ bathrooms Jan. 30. Photo by Will Cover.

An unknown student removed a paper towel dispenser from the boys’ bathroom studies hall and scrawled a pentagram in its place. RBHS staff has since replaced it. Photo by Will Cover.

“One thing we might do is seek restitution. It’s not really [administration’s] bill, this is Rock Bridge High School so it is your parents that are paying the bill. All of us taxpayers have to pay this bill, so it’s only fair to try to get some of that money back if we do ever catch who it is.”

Dr. Baker said RBHS administration has attempted to use the school’s camera system, which monitors the doors of every bathroom in the building, to identify vandals but the number of students entering and exiting the bathrooms made it too difficult to identify any suspects.

Although Baker said administration has not identified any students as responsible for the recent destruction, he hopes the combined efforts of camera monitoring, the inconvenience it creates for the RBHS community and an anonymous tip link on the RBHS website reveal the responsible parties.

“We’re hoping that we make now that we make it public perhaps it will guilt people into either a stopping vandalism, or be guilty conscience friends, anonymously telling us who did it,” Dr. Baker said. “We have shut down two boys bathrooms around here that were badly vandalized recently, and  we put a sign on those doors saying, ‘Closed due to the intentional vandalism.’ While that doesn’t seem like it would help, we haven’t had any vandalism since we’ve done that that we know of.”

What are your thoughts on the vandalism happening at RBHS? Let us know in the comments below.

New Year’s resolutions are good for every day