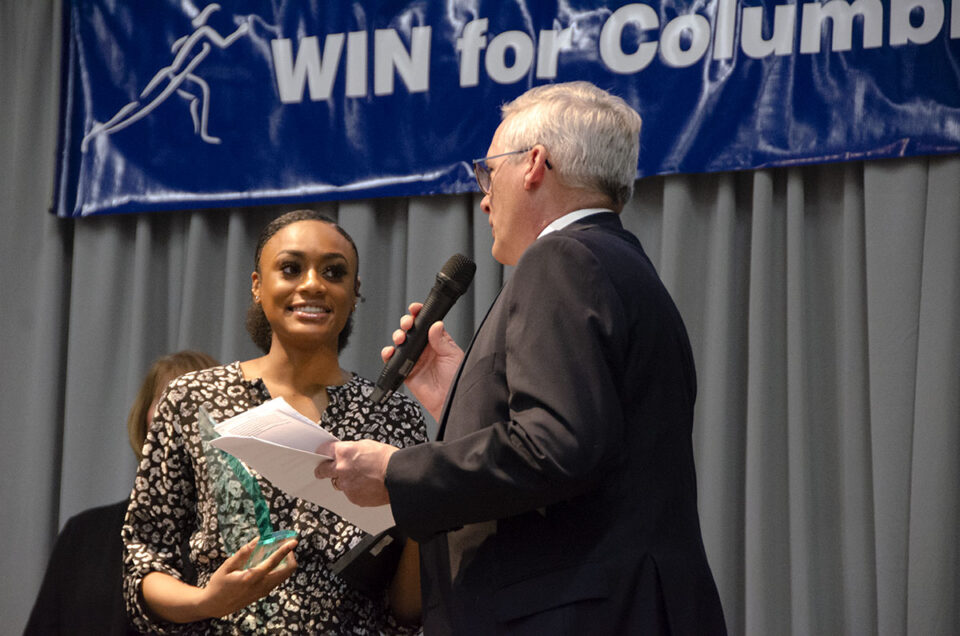 Junior Tyra Wilson smiles while being interviewed on stage after receiving the High School Sportswoman award at the WIN For Columbia luncheon on Tuesday Feb. 18, 2020. She said she was surprised to win but is happy to be recognized for her hard work. Photo by Maddie Marrero.

The Women’s Intersport Network (WIN) for Columbia Awards held its 23rd annual luncheon on Tuesday, Feb. 18 in recognition of the “outstanding female athletes of our community in conjunction with National Girls and Women in Sports Week,” as stated in a pamphlet from the event.

Local female athletes from the elementary, middle, high school, collegiate and professional levels attended the event to receive honors for their successes. RBHS Athletic Director David Egan has attended the event for seven years and said its keynote speaker Holly Rowe, who is an ESPN sports reporter, “knocked it out of the park.”

Emmy-nominated Rowe spoke about her passion for sports, her battle with melanoma and how she continues to inspire young girls to keep fighting. Rowe shared images from her personal and professional life, some of which included Matthew McConaughey going in for a hug and Oprah beaming alongside a grinning Rowe.

Listen to a portion of Holly Rowe’s keynote speech at the WIN For Columbia luncheon below.

“Every year it is a phenomenal event for the very important purpose of highlighting and recognizing and celebrating athletic accomplishments amongst our women’s sports in the community of Columbia,” Egan said. “I’m not making any judgement statement on this, but historically our culture has never had any issue in showering our attention and praise on high profile male team sports. So anytime you can have events like this that cast a spotlight [on women’s sports] can only be positive.”

“I hope you all keep chasing your dreams.”

Egan said this year was the first year the event held a Parade of Champions, which recognized  high school athletic teams who placed fourth or better in the state or individuals who placed in the top eight. WIN For Columbia recognized female members of the Battle High School Track and Field team, the Hickman High School Track and Field team, the RBHS Cross Country, Track and Field, Swimming, Golf, Softball and Tennis teams with certificates of achievement. Egan said the Parade of Champions was a nice addition to the event.

“I know everybody works hard, and I’ve just been through some stuff,” White said. “If I can help inspire a little girl there, then it’s awesome to be recognized.”

White was a successful softball pitcher her freshman year, receiving first team all-district honors and second team all-region honors. After her freshman season, though, she said her back started hurting in games. After complaining of the pain, she collapsed running to first base during the off season going into her sophomore year. Doctors then diagnosed her with spondylolisthesis, a spinal condition that affects the lower vertebrae, and told her she needed surgery.

“The pain of hearing that is just unreal,” White said.

White was out for the entirety of her sophomore softball season and didn’t pitch again until April of 2018. An anonymous person from the community nominated her for the Inspiration Award after recognizing her passion to continue to play the game she loved. The nominator said “Mackenzie’s bravery, perseverance, commitment to her teammates and passion for competition has been an inspiration for us all.”

“I had to see my sister get to do what I wanted to do [continue competing],” White said. “It was very ‘don’t take for granted what you have.’”

Although White didn’t win the award, she said being able to be part of an event recognizing female athletes was the best part, along with Rowe’s speech. White said Rowe’s story was very inspiring and “definitely promoted girls to be excited about their sport and competing.” She said she doesn’t think, however, women’s sports get enough recognition in the modern era.

“Especially in Rock Bridge because even at basketball games because I know Sophie Cunningham, when I was younger, she was a family friend so we’d go to all the basketball games to support her, and nobody was there,” White said. “Even their four championships in a row and nobody was there in the stands like there was for the smaller schools and especially with boys basketball. There’s way more people there for a regular game [for boys] than for a championship game for girls.”

Egan likewise said he recognizes the differences in attendance at male and female sporting events. He said he tries to be present and constantly promote all athletic programs.

“It is disheartening and frustrating, though, sometimes when our student section for boys basketball is significantly greater than our student section for girls basketball,” Egan said. “My office, we just have to continue to celebrate and highlight and encourage and do everything we can to make our community aware of what our female athletic programs are doing and try to get them out there to support [girls sports].”

Egan said RBHS has one of the best female athletic programs in the state and was even recognized by USA Today as having one of the top female athletic programs in the country. He said he is extremely proud of the success of RBHS female athletes, one of which highlights the accomplishments of Wilson. WIN For Columbia recognized Wilson as one of five females to be nominated for High School Sportswoman for her excellence in track and field last year. She won multiple state championships during her freshman and sophomore years at RBHS and has set multiple school records. She was named Gatorade Track and Field Athlete of the Year for the 2018-19 school year. Her 300m hurdle time of 40.79 seconds ranks second nationally.

“The luncheon was amazing. Holly Rowe, loved when she spoke, she was inspiring,” Wilson said. “I like how they recognized each sport; they didn’t just stick to one sport; it was all of them.”

Wilson said she was surprised to win the award because she thought Ford “had it in the bag.” Across the board, Egan, White and Wilson said they most enjoyed Rowe’s speech at the beginning of the event.

“She was the highlight for me,” Egan said. “I thought her message was phenomenal. I thought it was great for everyone there to hear. Certainly probably the most memorable keynote for me in the last seven years. I just really, really enjoyed Holly Rowe.”

Wilson said she was touched by Rowe’s speech and how she was “so real about everything.” She also said she loves when people are just real and honest; it makes the connections she is able to build with people more deep.

“Keep going, and keep pursuing your passion. Whether you’re 60 years old, 30 years old, 16 years old, just really close your eyes and think ‘What is the life that I want to be living?’ Because we aren’t promised any time,” Rowe said in her speech at the event. “I am living my passion, and I can’t tell you what a freeing, beautiful, awesome feeling that is. That’s what I wish for all of you, especially all of you young women in sports because it is honestly the greatest place to be … I hope you all keep chasing your dreams.”

How do you think our culture can further recognize female athletes? Let us know in the comments below.