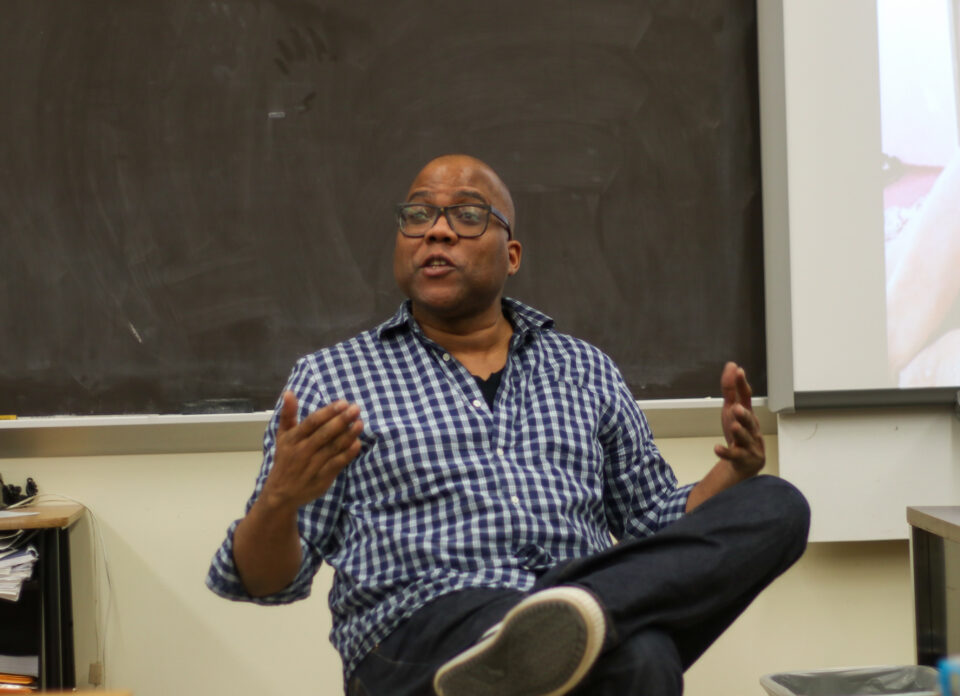 Jimmie Briggs, who is a journalist, author and advocate among other titles, spoke to the three Columbia Public School (CPS) high schools from March 2-4, ending with a visit to RBHS. He comes to Columbia, Mo to attend the True/False Film Festival and will speak to members of Camp True/False, a camp that allows high schoolers more access to events and speakers. After a weekend of documentaries, Briggs said he plans to return to his hometown of St. Louis to see his mother. 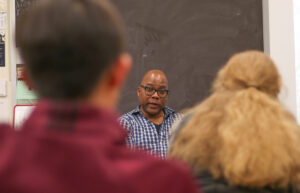 “Honestly I love speaking to students; I love speaking to young adults. It inspires me, and I learn a lot. I love sharing my experiences,” Briggs said. “I never had someone like me come into my school and talk to me, and I think it’s important, as a man of color, that people see me.”

Because of the high demand for his presence, Briggs’ schedule had no empty slots as he was briskly escorted from classroom to classroom by teachers and students who peppered him with questions. In the classrooms, he spoke about four topics: narrative and storytelling, the opioid crisis, racial justice and children affected by war.

These topics covered only some of Briggs’ experiences as a journalist who has traveled the world chasing stories regarding injustices to spread empathy and truth. Briggs, however, didn’t enter college with the intention of becoming a journalist. In fact, he was on track for medical school when he found his calling: to be the messenger of stories. With this passion, Briggs worked up from a bartender position to a writer for Life Magazine, eventually starting his own non-profit, Man-Up, and authoring the book Innocence Lost. The book tackles the extremely sensitive and difficult topic of child soldiers. To bring a holistic view to the complicated war situations, Briggs traveled to interview community members from various countries such as Rwanda, Colombia, Sri Lanka, Uganda, and Afghanistan.

The message I want to spread is that their are a lot of adults who want to see you all succeed, who even if they haven’t met you in person, want to hear about your futures and be a part of the change you wish to bring into the world, and want to help you create that change

Briggs is also deeply invested in the representation of women and people of color. He said, after traveling to various countries in different crises, he found women are often the most vulnerable, whether that was because of reproductive needs or domestic violence. Currently, he is working on another book tackling this issue, titled The Wars Women Fight: Dispatches from A Father to His Daughter. His goal for the Man-Up campaign is to foster a world where women are safe from owning a firearm after a domestic violence charge and inequity. Man-Up uses a S.M.A.R.T approach, promoting youth in Sports, Music, Arts, Reflection and Technology.

“Our fields, as journalists, are still not as diverse as they should be. There aren’t enough women; there aren’t enough people of color in the field,” Briggs said. “So I feel, it’s important for people to know that I exist, and if I can inspire someone or something I say sticks with someone, it’s more than well worth it.” 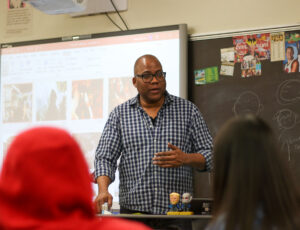 Students listened intently to Brigg’s stories and stared shockingly at the photos he presented to compliment his descriptions. Senior Connor Kyles said his favorite part of the experience was hearing about Brigg’s personal journey of having an introverted personality to addressing some of the most painful stories in the world. He said Briggs’ character development and his persistence as a journalist inspired him most.

“Just doing what he does without fear… I like people who have that determination,” Kyle said. “It shows that they are determined to solve something.”

Senior Mai Gagnon echoed Kyle’s admiration to the bravery Brigg’s showed through his career. As an aspiring writer, she said Brigg’s taught her important lessons on how to be thorough and tell more than just one story. She said Brigg’s made sure to portray his sources as more than just victims.

“I want to write, and also talk about the things he does,” Gagnon said. “I don’t want to be a journalist, but it was really good inspiration for making sure you’re doing things correctly.”

Briggs said he would be satisfied if students remember and brew over anything he said during the session. He said he hopes they recognize their potential and follow their passions after high school.

“It may sound corny or whatever, but I guess the message I want to spread is that their are a lot of adults who want to see you all succeed, who even if they haven’t met you in person, want to hear about your futures and be a part of the change you wish to bring into the world, and want to help you create that change,” Briggs said. “And, frankly, we want to be your resources or have you turn to our advice to lean on.”

What questions do you have for Jimmie Briggs? Let us know in the comments below.

True/False hosts its first party of the year, ‘Jubilee’