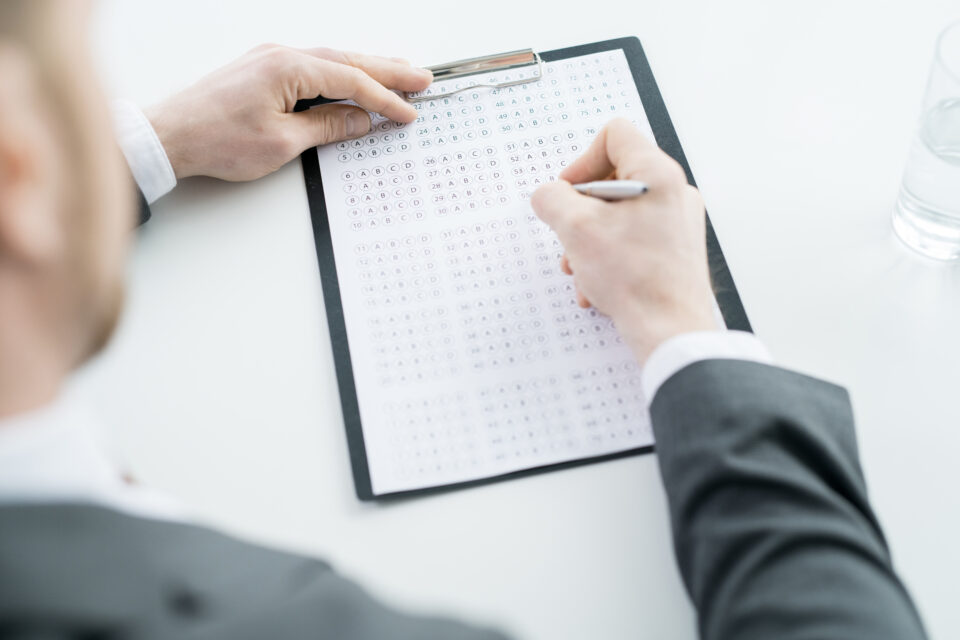 A standardized test. Photo by EnvatoElements

The College Board and American College Test (ACT) company canceled the April 4 ACT and May 2 Scholastic Aptitude Test (SAT) exams, respectively, March 16; this cancellation comes as an attempt to prevent the spread of the coronavirus disease of 2019 (COVID-19).

RBHS will no longer provide testing centers for either of these exams for the April or May dates. The ACT company is compensating students who signed up for the April ACT by offering the June or July exams as alternative dates. Students may also choose a refund of their money.

Guidance counselor Carrie McKee said the ACT company and College Board approve testing one year in advance, so providing in-person and remote testing, such as online, could prove difficult.

“Testing at home would be extremely difficult to monitor as ACT has specific instructions for each test so again it wouldn’t be up to RBHS or CPS. It would also be difficult as not everyone has reliable internet access.”

“Unfortunately, a lot of the ACT and AP rescheduling are out of [RBHS’] control,” McKee said. “Testing at home would be extremely difficult to monitor as ACT has specific instructions for each test so again it wouldn’t be up to RBHS or CPS. It would also be difficult as not everyone has reliable internet access.”

The ACT cancellation particularly affects students applying to summer programs or those who would like to boost their score one last time for scholarships. Senior Afnan Hussain said she was initially upset that this ACT was canceled but is now relieved as her school will accept the June score.

“At first when I found out the ACT got postponed, I was very frustrated because this was my last chance to get the score I needed for the next scholarship, which was only one point away,” Hussain said. “The college I’m going to didn’t accept tests after this one.

Hussain plans to attend the University of Missouri – Kansas City, which requires a 31 on the ACT to qualify for the scholarship. On top of scholarships, The March ACT bordered deadlines for summer camps, and this would have been the last chance for students to submit their scores. McKee said because of the unprecedented conditions, students should contact the program’s organizers for further information.

“[Summer programs] may have special instructions in light of these circumstances,” McKee said. “They might have an alternate plan for those affected.”

An alternative plan could not circumvent the college admissions process; the class of 2021 only has eight ACTs until the end of their senior year, and even fewer for those applying to college early. Junior Mohammed Abu-Salah, who planned on taking the May SAT, said he is uncertain he will be able to get the score he needs in time for university application deadlines.

“We don’t have that much time to apply for colleges,” Abu-Salah said. “If they cancel all these tests, we won’t have time to get better and improve our scores.”

College admissions can begin as early as the start of the school 2020-21 school year. While students may need this exam for college applications, COVID-19 could impact other things colleges look at, such as AP Exams. The College Board said on a recent instagram post that it does not plan to move the testing date back, and they plan to implement remote testing as a contingency policy. McKee said, however, she assumes AP exams will still take place on their respective dates in May.

“As a district we are taking precautions each day and if changes to the school year need to happen we will adapt accordingly. The main goal of RBHS and CPS is to keep students and families safe and to continue education as best as we can during this time,” McKee said. “As counselors we know this change can be very stressful for students, parents, faculty and staff.  We are available to help and support as best as we can.”

What are your thoughts on these cancelations? Let us know in the comments below.