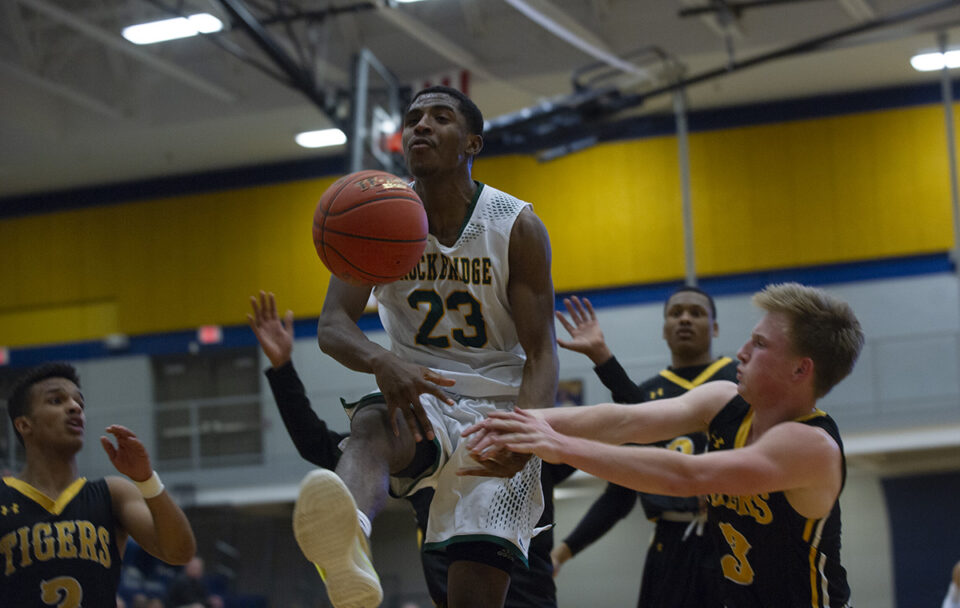 Leaping towards the basket, senior guard Charles Wilson gets the ball shoved out of his hands. Wilson would get the foul call and go on to make both his free throws. Photo by Camryn DeVore.

An explosive Bruins offense came to play as the RBHS boys’ basketball team began the first quarter of the district semifinal game against the Smith-Cotton High School (SCHS) Tigers. The first few minutes of the game relied heavily on the play of the guards junior Xavier Sykes, senior Charles Wilson and senior Brant Bowers on the court.

Sykes and Wilson made countless cuts to the basket, either picking up a foul or making another two points. Bowers sunk shots from the corners of the court, giving the Bruins even more momentum. At the end of the first quarter, they were up 25-13.

In the second quarter, RBHS did not let off the gas. They continued to push their fast paced offense, this time also giving senior forwards Cooper Deneke and Grant Hajicek looks at the basket. The rebounding of both fed the Bruins’ momentum as they were able to put up multiple shots and run time off the clock. Non-starters were able to see the court as well during the second quarter as RBHS they advanced its lead to 42-21.

The Bruins, however, underestimated their opponent in the third quarter.

A 20-point lead seemed to be enough for RBHS because they relaxed their pace for a second and SCHS took advantage of that. With four minutes left in the third quarter the Tigers cut RBHS’s lead to eight points. The tension in the gym was rising, not only were fans getting anxious, but the Bruins were evidently feeling it, too. They had a string of passes result in turnovers and missed baskets they had made easily in the beginning of the game before they were able to get their nerves back under control. The game, however, was never truly too out of hand, with the Tigers never getting closer than eight points after halftime.

“I felt like we were in a little bit of a trance when they put the pressure on us. It’s one of those things, especially in basketball, it’s such a momentum game,” Hajicek said. “Once they took the momentum we had to try and force to get out of the hole and it kind of got out of hand.”

The Bruins met together in a huddle after the third quarter and were able to reconvein. With help from junior guards Caden Sartain and Nick Ardnt, RBHS pushed its offense back up to standard. What had felt like a close call for the team soon faded away as they once again pulled away. Bowers drained two crucial threes in the first part of the fourth quarter to get the momentum back in the hands of his team. After getting their offense and defense back together, the Bruins went on to win the game 76-60.

“We were just focusing on trying to take care of the ball because we had a lot of turnovers in the third quarter,” Sartain said. “I think we just need to slow down next time and make sure we don’t turn the ball over.”

RBHS will now prepare to compete for the district championship against Battle High School Friday, March 6 at 7:30 p.m. The last time the team faced Battle Jan. 7 they won 59-54. With no time to practice between now and the championship game the Bruins must focus in mentally to prepare.

“We need to come together as a squad and help our press break and after that we need to get the [win],” Sykes said. “Making sure we maintain pressure on the other team and not let the pressure get to us [is crucial].”

Will you be going to the championship game? Let us know in the comments below.

‘Crip Camp’ exceptionally recognizes past mistreatment of the handicapped, fight for reform