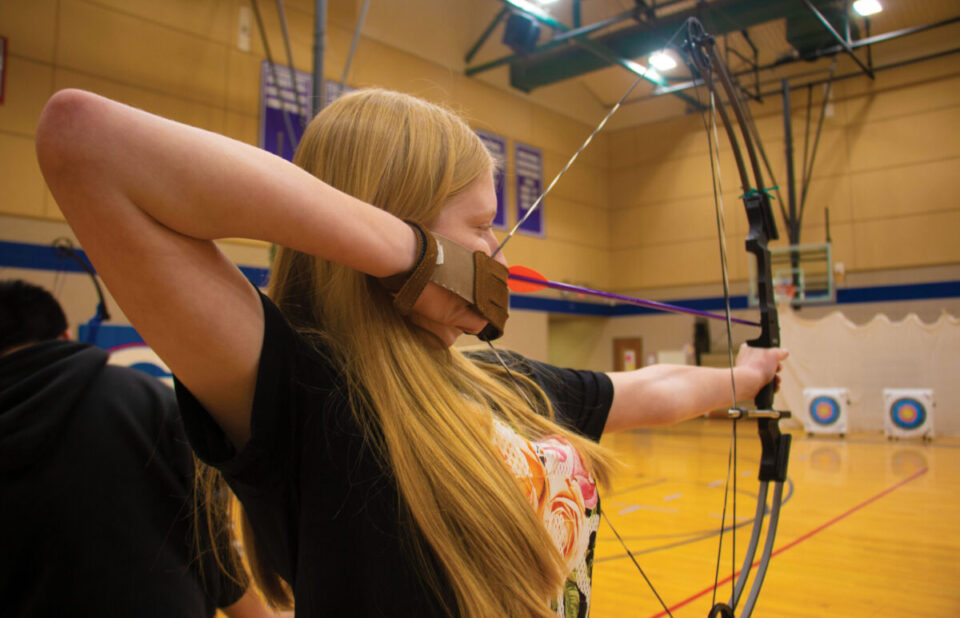 Every Thursday from 6-8 p.m., the Gentry Middle School (GMS) basketball gym is packed with students, ranging from sprightly sixth graders to spirited sophomores, for weekly archery club practice. While the crowds of archers wait for the coaches’ plans, a sea of smiles and laughs fill the practice space as they converse about their school days, favorite TV shows and how many bullseyes they’re going to hit.

As soon as a beeping noise rings across the gym, the archers disperse and prepare to shoot. They shuffle over to a rack to select their Genesis bows — a type of compound bow — and walk to their designated shooting areas, which stretch the length of the court. When they pick up their arrows and draw them back, a brief silence consumes the gym, and the collective focus of each student creates a suspenseful tension.

Once the first arrow flies, dozens more follow immediately. During the next five minutes, the practice area transforms into a scene from a medieval movie, and arrows rain across the gym, impaling the short targets. After the last arrow loosens and strikes the target, another high-pitched beeping noise signals the retrieving period. The archers walk toward the targets in relative silence, analyzing how accurate their shots were before returning the arrows to the shooting line. The process repeats for the next two hours, with the occasional rest period that allows students to stretch out their shoulder, rest and converse.

The archery club began at GMS four years ago after Angie Roberds — one of the four coaches — introduced the idea when she transferred her teaching post from Battle High School to GMS.

Once the first arrow flies, dozens more follow immediately. During the next five minutes, the practice area transforms into a scene from a medieval movie, and arrows rain across the gym, impaling the short targets. After the last arrow loosens and strikes the target, another high-pitched beeping noise signals the retrieving period.

Students from both GMS and RBHS practice together in the same space. While there are five RBHS students competing individually in tournaments, they have yet to form a sanctioned team because of the 12 member bar. One of the requirements for the club to exist is to include archery in the school curriculum.

As a physical education teacher at GMS, Roberds incorporated archery into her P.E. class and became the teacher sponsor and formed the club. A year after the establishment of the club, Bree McMurray — another coach — joined when her daughter decided to get involved as a seventh grader. Bree McMurray had learned about the sport from a friend whose kids competed in archery tournaments and soon became an avid fan after watching some of their tournaments.

“A lot of the kids that do archery don’t do other sports. There’s no ball involved, no grappling or touching others and no running. So, it’s a unique sport,” Bree McMurray said. “When I found out there was a club here at Gentry, I asked my daughter if she’d like to try [because] it was something I was already familiar with. She decided she’d give it a go, and she loved it.”

Bree McMurray’s daughter, freshman Sofie McMurray, said one of the reasons she joined and stuck with the sport was for the challenge and competition. Sofie McMurray said the sport, along with the fun environment, has taught her grit.

“One of my biggest [issues] was that I used to hit myself in my arm a lot, so I had to learn to bend my arm a little. I think a lot of people have that problem, too, but every practice is a chance for you to learn something new about yourself that you could improve on,” Sofie McMurray said. “[During practice] we also learn more about our shooting spots, so we can get the score we want. We find a certain spot on the target, and we try to aim for it every single time.”

Weekly practices eventually cumulate in tournaments, another aspect Sofie McMurray particularly enjoys. Tournaments predominantly take place on Saturdays and are split into three levels: elementary, middle and high school. Participants compete based on flights, or specific starting times for the archers, and will shoot 10 meters and 15 meters. At each distance, an archer has one practice round of five shots. There are then three subsequent scored rounds, with five shots in each round. A bullseye is worth 10 points, so the maximum amount of points at each distance is 150, and the maximum total points possible is 300.

“A lot of the kids that do archery don’t do other sports. There’s no ball involved, no grappling or touching others and no running. So, it’s a unique sport.”

Bree McMurray said during tournaments there are also state qualifying scores, which are different for the three levels. She said most of the participants are “trying to hit 270 to 275,” which means the archers are “only missing 20 or 30 points out of that whole round of arrows,” which McMurray said is an impressive accomplishment.

One of the archers who qualified for state this year is freshman Ariana Eckerson. At the Helias High School State tournament Feb. 1, Eckerson got a total score of 287, her personal best, and finished fourth among 134 middle and high school girls. Eckerson referred to multiple points in her technique that were essential to her success.

Eckerson’s fellow high school teammate and friend, sophomore Leo Miller, agreed with her about the keys for establishing good technique for a tournament. Additionally, Miller said eliminating distractions and focusing on the target is essential for tournament success.

“Before and during [tournaments], I really try to settle myself because shooting really takes focus and concentration. If your mind is going in different ways when you’re [trying to] think about different things, it can distract you and affect [your performance],” Miller said. “I’ll try to just focus on the target and kind of push everything aside and you know just like try to shoot my best. These practices are chances to [practice] focusing and to get better.”

Although the members have a passion for competition, the larger benefit for students and coaches is the formation of a welcoming community. More than 700 schools participate in the Missouri region of the National Archery in the Schools Program.

“I like the club because I’ve [gotten to] know five people from Rock Bridge,” Eckerson said. “I’ve also met a lot of friends who are in middle school and [will] eventually come to Rock Bridge, so that’s [exciting].”

Sofie McMurray said she is also excited for when the current middle schoolers come to RBHS since she and all of her peers have a family-like relationship. She said she appreciates the moments when everyone celebrates someone else’s victory, whether that be a personal best or a podium placement.

“What’s positive to me is how a lot of people joke [and say], ‘I did better than you; I got a higher score than you,’ but there’s a lot of encouraging others, too,” Sofie McMurray said. “It’s really the atmosphere that [ties] everything [together]. Once [the other kids] get to a tournament, they’re serious and focused, but as soon as they step off, like as soon as they step out of the gym, they’re talking and being loud and hugging again.”

Ultimately, Bree McMurray said the goal of the club is to create friendships and offer something new for all participants. She said the age around middle school and high school offers a new world of opportunities for kids to explore their interests and find fun.

“At the middle school level [there is] encouragement for a lot of kids to try different clubs, a different language, a musical instrument, etc. It’s all part of that ‘give it a try’ attitude. In high school, kids kind of know what they like,” Bree McMurray said. “But you introduce archery, and it’s like a new [and unique] thing. We’re not looking to recruit this big elite team. We want kids to have a different experience, something that they wouldn’t get elsewhere. [Our kids] all seem to have a good time, so we’ll try to [keep] making it fun.”

What are your thoughts about the archery club? Let us know in the comments below.

Thank you Ryan for this article! Though they canceled the state archery tournament and Kate and Ariana did not get to compete at that level this year, they’re still pushing for it next season and hoping to have a great year with lots more RBHS members!