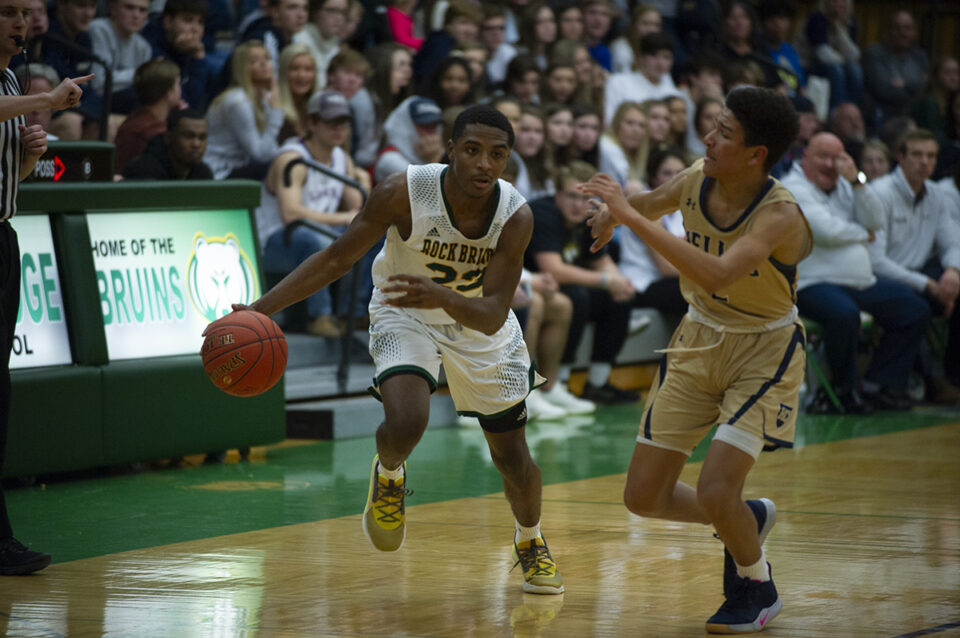 Senior guard Charles Wilson blows past a Helias Defender in the fourth quarter of the game. Wilson has become a key part of the Bruins offense in the past year.

The crowd strolled in fashionably dressed as the varsity boys’ basketball team prepared to take on Helias High School (HHS). The bru crew theme for the night was formal, and the crowd showed up wearing full suits and dresses, some even coming in Igor outfits. The energy in the stands was high, and the student section was completely filled with students. The school showed out to support the six seniors. It was senior night for both the girls’ and boys’ teams. The girls played at 6 p.m. and the boys played just afterwards.

As the the announcer began to call out the starting lineup for the HHS Crusaders, the student section turned its back to the opposing team in a small gesture of disrespect. Tensions between HHS and RBHS have grown steadily during the past couple of years as just a few years ago RBHS’ 2016-2017 starting point guard, Ben Cooper, moved to Jefferson City and played for the Crusaders. Last year Helias’ starting point guard then sophomore Xavier Sykes transferred to RBHS and helped contribute to RBHS’ win at state. Now a junior, Sykes began in the game last night for the Bruins and took on his past teammates.

“The stakes were high when I left [HHS]. Everyone was doubting me, so when I came into the game it was more of a mentality of kill,” Sykes said. “That’s just my mentality when I play.”

The game began close, and the Crusaders led for most of the first quarter and were beating the Bruins 18-14 as the teams headed into the second quarter. The Bruins quickly picked up their pace in response to the Crusaders early four point lead. By the end of the half, the Bruins found themselves back on top 26-25.

The game continued to be a physical one as Sykes battled against the opposing point guard. Elbows were thrown by both teams, and there was constant contact between the two guards. The two players carried on this physical and fast-paced play until the final seconds of the clock ran down. In addition to this defensive contact, senior forwards Jacob Ungles and Cooper Deneke played rough in the paint. Both the forwards battled to control the game by grabbing rebounds and shutting down the Crusaders’ offense in the post.

“We were just told, ‘Go get rebounds,’ so me and Jacob went and gave it our all,” Deneke said. “We didn’t want to lose on senior night, so we gave everything we had to get to win.”

The third quarter came, and the Bruins expanded their lead. By the end of the third quarter RBHS was up 40-31. The game wasn’t over for either team, however. Both the Bruins and Crusaders continued to battle through the incredibly physical match through the fourth quarter. Even so, the Bruins came out with a win 57-48. The Bruins finished their regular season with a 21-3 record, putting them as the number one seed in the coming district tournament beginning next week.

“I think Helias is really good. They have a really good ball club. We just had to guard them, and I think we did a pretty good job. Our defense was pretty good, but we knew they were good and we needed to practice,” head coach Jim Scanlon said. “We didn’t practice all that well at times- we haven’t even been playing that well- but the guys got it done, and I am just happy for the seniors.”

What were your thoughts on the game? Let us know in the comments below.

A Q&A with Teresa Brooks, the first female student body president at RBHS

This game was an absolute roller coaster that drew the entire student section to their feet on multiple occasions. Absolutely a deserved win for the Bruins.