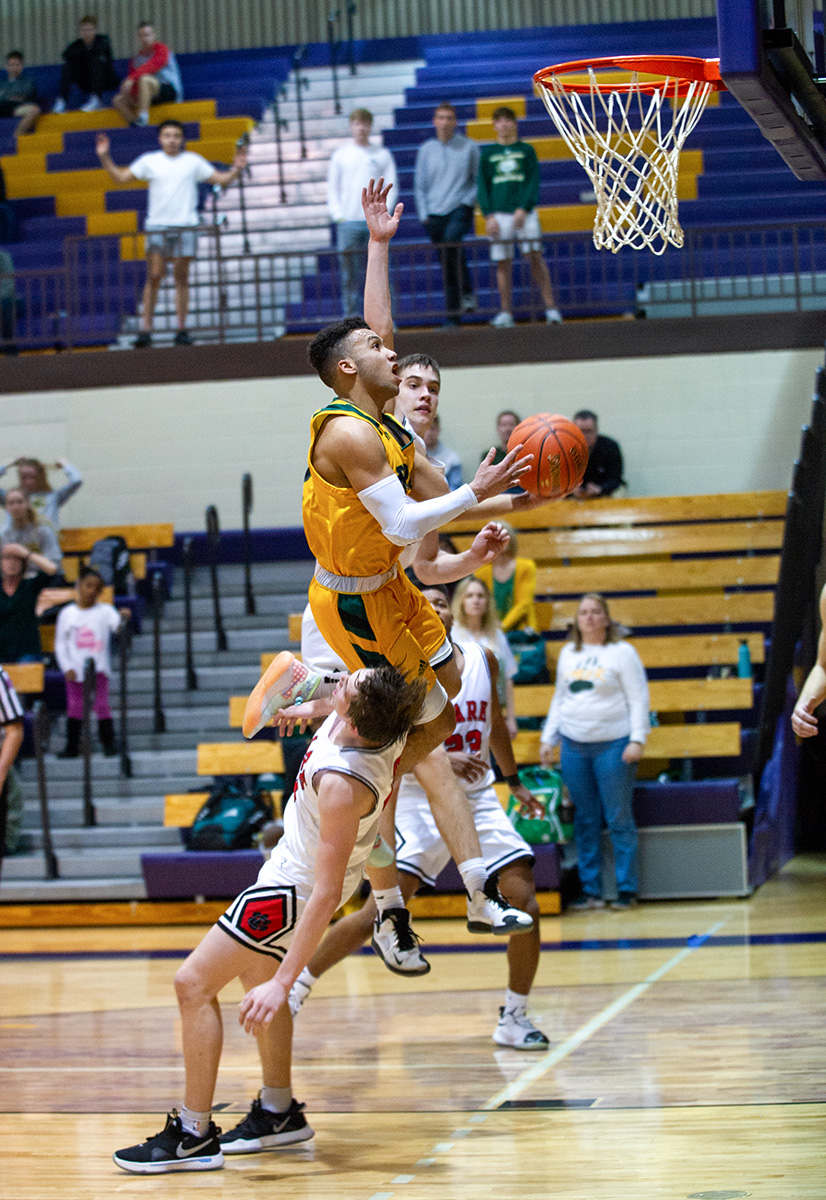 Junior Xavier Sykes jumps over a member of the Lakers team at the sectionals game Wednesday, March 11. Photo by Ana Manzano.

Sometimes eight minutes can make all the difference in the world, at least it did for the boys’ basketball team at their sectionals game Wednesday, March 11. After two overtime periods, The boys won the game with a final score of 65-53.

When the team stepped onto the court in the second overtime, the score was 51-51. Senior guard Brant Bowers scored a three-pointer to give the Bruins a lead one minute into the second overtime. When asked about his thought process in the overtimes, Bowers said, “We just thought to ourselves that we were lucky to be in that position, so we might as well give it our all and try to win the game.”

On the ensuing possession, junior guard Xavier Sykes converted a layup to put the Bruins at 56-51. Later, a foul sent Sykes to the free throw line, and he made both shots. After about a minute of play, senior Charles Wilson was also fouled. He made both of his free throws, and suddenly the Bruins were up by nine points. In three incredible minutes of play, the momentum completely switched, and the Bruins won the game.

The first overtime started at a score of 47-47. Senior Jacob Ungles won the jump ball, and the first overtime began in favor of the Bruins. The team had the momentum they needed to move forward, and their energy from this overtime was unparalleled to the rest of the game. A foul on Sykes allowed him to shoot free throws, which created a two point lead. The team scored three more points, but the Lakers scored two points as well, so with one and a half minutes left in the overtime, the score was 51-49 in favor of the Bruins. But in a heartbreaking moment for RBHS, Ozark scored two points and successfully forced another overtime.

The fourth period started at 36-35, and had more fouls than any other part of the game, including overtimes. Both teams committed 10 fouls combined in the whole quarter, and by the end, Ozark had seven fouls, and RBHS had 10. The Lakers scored a point early in the quarter, but so did the Bruins, shortly after coach Jim Scanlon called a timeout. According to senior forward Jacob Ungles, the timeouts are where coach Scanlon had the chance to discuss strategy.

“We just thought to ourselves that we were lucky to be in that position, so we might as well give it our all and try to win the game.”

“During timeouts we were going over strategies that we thought they would be using,” Ungles said. “And talked about how we needed to come out and start to get things rolling in our favor.”

With six minutes left in the quarter, the score was 42-37. Bowers scored a three-pointer, and the Lakers scored two points as well. With the score now at 46-42, the referee made a call against Sykes, which was met with cheers from the Ozark crowd, and boos from the RBHS crowd. However, the stadium exploded into cheers when Xavier Sykes scored a layup, and a free throw put the Bruins at a score of 47-47, they would have a chance to move to the quarterfinals because of Sykes’ layup.

“We’ve been having very rough third quarters lately,” Bowers said. “So when the fourth quarter came around we knew we had to do all we could to come back.”

Despite the third quarter seeming to spell demise, and the two overtimes leaving fans at the edges of their seats, the Bruins won the game, and will move on to the quarterfinals game Saturday, March 14. Though the win was a team effort, it is undeniable that Sykes’ effort throughout the game was a major contributor to their victory, Sykes said, “Our hope is to go out play well so we can go to the final four for the third time in a row.”

How do you feel about the Bruins’ performance? Let us know in the comments below.