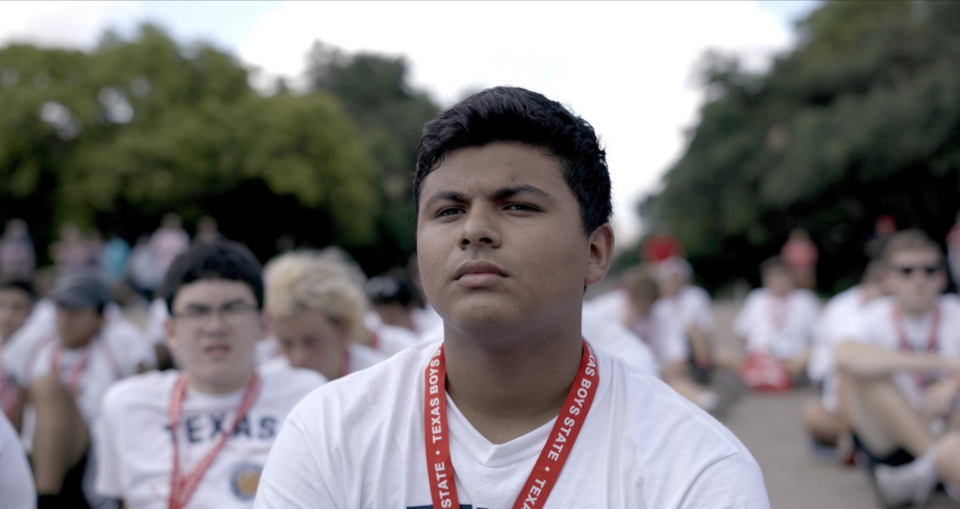 Boys State is a camp run in each state that gives selected students in the rising senior class an opportunity to get better educated and interactive with politics. There are cities, elections, laws, debates, speakers, classes and games that the kids attending Boys State have to navigate in a relentless week defined by self-determination. I attended Missouri Boys State in 2019 and got to see and participate in all of these activities first hand. Boys State, to me at least, felt like a combination of the best and worst traits of people my age. I saw the ambition, sensibility and humor in many people but also saw the vitriol and mob-mentality that snowballed into ‘Lord of the Flies’ esque situations throughout the course of the week. ‘Boys State’ the movie has focused on both sides of this coin, but mainly eyes the ambitions of the most engaging and important aspect of the camp: the governor election.

The election of the governor goes on through the entire week, culminating in the winner being announced on the last day of camp. ‘Boys State’ focuses on the kids attending the Texas Boys State program that are focused on politics and have the ambition to show what they are capable of in a position of power. Even if the entire camp is a simulation of sorts, the people who rise to the top are those who have the prowess to succeed in real life. In a Q&A after the movie, director Jesse Moss talked about studying and interviewing hundreds of kids going into the Texas Boys State program. The four kids highlighted in this movie rise to the top of their parties because they have the qualities of leaders. Some may use different tactics to get to their campaigning positions, but they all have the determination and compassion that leads them forward.

‘Boys State’ isn’t a summary of the program itself. The filmmakers only lightly touch on the silly aspects of the camp that are much more prevalent in real life. The film focuses on the kids who might make a difference in future American politics and how they survive the current political landscape. ‘Boys State’ is a commentary on how younger generations see politicians today. One candidate tries to lie his way to the top; he wants party members to rally behind his empty calls rather than focusing on nuances. Some kids use smear campaigns to make the other party look unfit to have power in the faux government. Others try to be authentic to themselves while serving the needs of their party. Each approach comes with mixed results that reflect the political landscape of the camp attendees and what they tend to favor.

It is easy to disregard the validity of teenagers at a program like Boys State because of their age. Some people may say Boys State is full of boys acting like politicians in the same way young boys pretend they are astronauts or warriors; there may be no real life connotation. ‘Boys State’ shows that the reality is anything but. While there are comedic elements that seep into what is supposed to be a serious environment, even that is a reflection of reality. Ridiculous things happen in politics all the time. Donald Trump’s presidency used to be a joke on The Simpsons. While the kids that fill their speeches with empty promises in the movie seem uninformed about the US government, it really reflects the younger generation’s perception of politicians.

There are some hard truths in this movie that may be brushed aside by audiences because the truths are coming from kids, but the overall message of understanding each others’ opinions despite political divides is all the more relevant in a time where social media feels more divided than ever. Kids from every side of the political spectrum are succeeding in making a name for themselves and are able to interact with one another. ‘Boys State’ is a wonderful study on the younger generation, their understanding of politics and determination based on their own ideals, even if it means disagreeing with others. My experience with Missouri Boys State included the two governor candidates winning because of their slogans, and both losing to a third party after showing their lack of knowledge on basic types of taxes. Despite the outcome of the Missouri Boys State election or the Texas Boys State Election, there are always diamonds in the rough that stand out.

Jared Geyer is a senior artist and editor for Bearing News. He runs cross country and track. He enjoys movies, music and roller coasters.