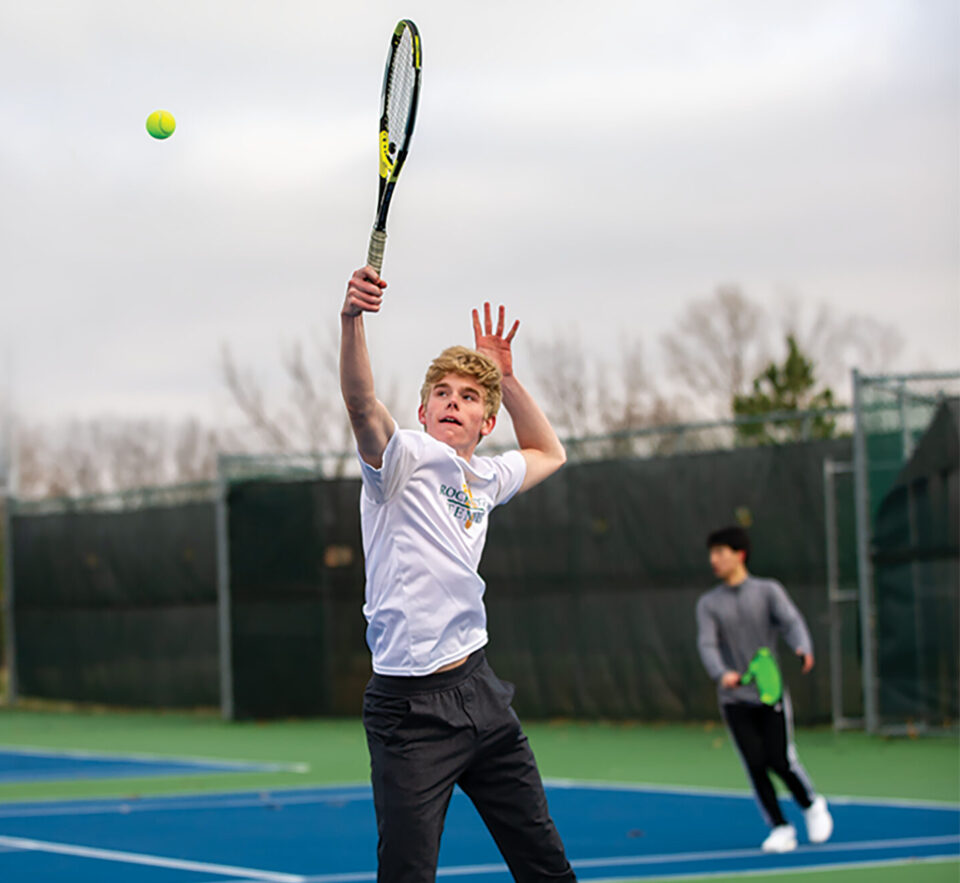 In the last decade, the boys’ tennis program has achieved a top three title every year at the Missouri State High School Activities Association (MSHSAA) state championship. In seven of those 10 years, the team finished first, and currently they are defending their four-peat stretch. Head coach Ben Loeb became an inductee to the Missouri Sports Hall of Fame in 2015 to honor his 35-year coaching career.

The turn of the decade presents a new challenge to the Bruins, not only in terms of championship aspirations, but also with growing pains. Five of the six players from last year’s state championship team graduated, and the lone returning member — sophomore Max Litton — elected not to play this season for personal reasons. Loeb said the team comes into the season with a “completely new roster.”

“We need to reset goals. I think a big thing is trying to stay within the things we can control [like] having a good attitude, working hard [and being] accountable to each other,” Loeb said. “We’ve won the district title every year since 2002, so [winning] that would be a great accomplishment in itself.”

Although the returning roster will be fresh, there will still be familiar faces. Senior Nate Herting will return for his fourth straight year on the team. Loeb said Herting will be a player he leans on throughout the season.

“We need to reset goals. I think a big thing is trying to stay within the things we can control [like] having a good attitude, working hard [and being] accountable to each other.”

“This year our confidence level is lower since we lost so many good players, and expectations are high. The former tennis players that graduated were a blast to be around and always knew how to work hard,” Herting said. “They showed us how to lead a team and were always role models to the [underclassmen]. [During the season], we’ll want to improve our team spirit and cheer on everyone, not just [our] closest buddy.”

Senior Eric Kwon will return to the team after taking a year hiatus. Kwon said intense academics and extracurricular activities influenced his decision to not participate during last year’s season. Entering his final year of eligibility, Kwon wanted to provide a veteran presence to a less experienced squad.

“My first year on the tennis team as a freshman was one of the best years. As an eighth grader, I practiced almost every day during the summer to improve my tennis skills and prepare for my first season of high school tennis, and it paid off. [Although] I barely made it in the team, I was proud of my hard work,” Kwon said. “I look forward to continuing my journey towards improving my tennis skills. During this season, I would love to improve my leadership skills and knowledge about how to lead a team.”

While he said he would miss the team, junior Garrett Roach will not return to play this year. He cited the same reasons as Kwon for why he chose not to return to the team this year: the heavy academic demand of junior year and involvement in school clubs. Roach is a member of multiple school clubs — Young Republicans, Young Moderates, Student Council and Mu Alpha Theta among them — and has an internship as an instructor at Mathnasium, a local math tutoring service.

“The former tennis players that graduated were a blast to be around and always knew how to work hard. They showed us how to lead a team and were always role models to the [underclassmen]. [During the season], we’ll want to improve our team spirit and cheer on everyone, not just [our] closest buddy.”

Roach said he has no doubt that the program will succeed without him, particularly because he knows how hard Loeb will challenge the team. Roach said Loeb “isn’t in the Missouri Sports Hall of Fame for no reason” and believes the boys will find a way to accomplish whatever their goals are. Kwon also said the Bruins will need to overcome the low expectations from other schools in order to defend the state title. He said Loeb helps with this by instructing the team to focus on the journey, not the end result.

“Although we don’t expect the pure dominance on the courts we had for several years, I expect us to strive for the best results and find a way to the state tournament,” Kwon said. “With a tenacious and unwavering mentality, I believe we can win it all again.”

Herting also said another important job for all the players on the team is to support each other. After practicing his game during the offseason, Herting said he looks forward to the season. Pouring in hours to perfect their craft will be critical in preparation for competitive competition.

“I think we have pretty good potential. If we put in the work and keep fighting, I think we could make it to the top four again,” Herting said. “We plan to do this by putting in more time than other teams and helping everyone around you to reach their full potential.”

“Although we don’t expect the pure dominance on the courts we had for several years, I expect us to strive for the best results and find a way to the state tournament. With a tenacious and unwavering mentality, I believe we can win it all again.”

No matter the end result, Loeb said the ultimate goal for the players is to become better people through tennis. He said he has had no regrets as far as choosing his career path and thinks the biggest reward of his career is developing relationships with kids that want to “strive together to achieve personal and collective excellence.” He said on-court victories and off-court improvements are not mutually exclusive.

“Sure, we want to have a lot of success on the court, and I think the group we had last year was very committed to it and committed to each other. That’s something we’re going to miss some of that this year, evidently with the team being a little bit less experienced,” Loeb said. “But I think [the journey] starts with commitment and respect. The [players] that throw themselves into [the work will] learn more about themselves.”

How do you think the boys’ tennis team will perform this year? Let us know in the comments below.