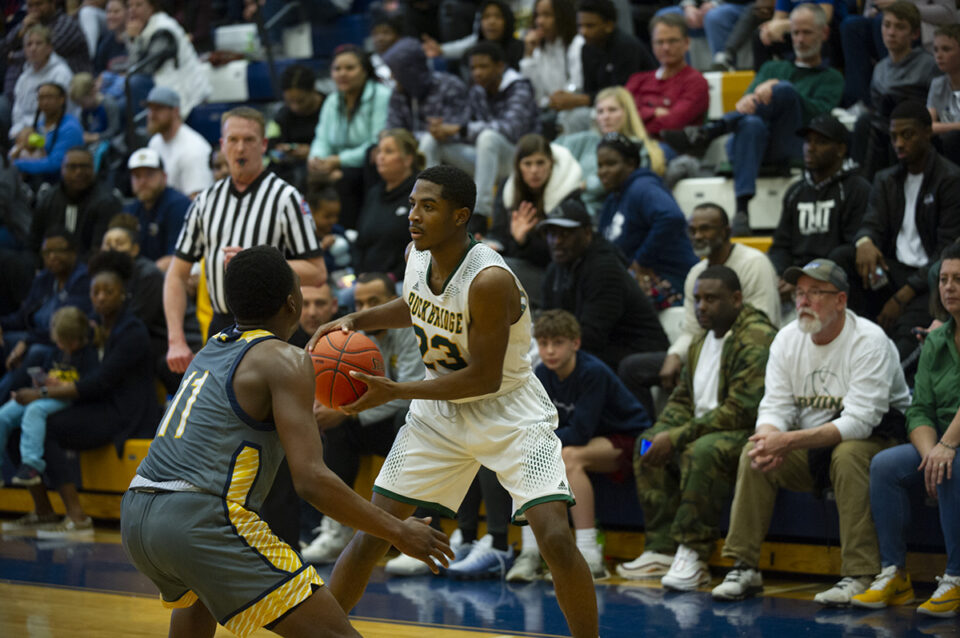 Senior guard Charles Wilson looks for someone to pass too after picking up his dribble in the corner of the court. Photo by Camryn DeVore.

The crowded Battle High School (BHS) gym grew loud as the RBHS and BHS boys’ basketball teams took to the court to start the district championship game. Student sections for both teams were packed and noisy with various cheers, either in support of their own players or against the opposing ones. The noise level nearly drowned out the voice of the announcer as he called the teams. Last time the two teams faced off, RBHS had only won by four points in a hard fought game. The Spartans were looking for revenge, and this time they had the home court advantage.

The first quarter was a back and forth struggle between the two teams. RBHS would lead the majority of the quarter, but only ever by one or two points. The Bruin’s guards junior Xavier Sykes, senior Charles Wilson and junior Nick Ardnt were making their shots, but so were the Spartans, and the game continued to be a close one. At the end of the first quarter, the Bruins were able to secure a three point lead 10-7 but looked to further it in the second quarter.

“This is really just a great experience, you know,” Ardnt said. “I wanted to go out there and win. I wanted to win for my team.”

The second quarter, despite RBHS’ attempts to strengthen its lead, proved to be similar to the first. The Bruins were able to keep a few points ahead through the quarter, but with only a minute remaining BHS tied up the game. With one possession left in the half and the need for a momentum swing, RBHS brought the ball down the court. The final seconds ticked off the clock, and just before the buzzer went off, Sykes put up a three to hit a buzzer beater, once again putting the Bruins up by three, 21-18, as the game went into half-time.

The third quarter was a table turner, and not in the Bruins’ favor. The Spartans came out of the half with a new fire to play, and it showed. They took the lead in the game, but not just by two points this time. With three minutes left in the third quarter, BHS had secured a 30-25 lead. Tension among the Bruins rose, and it began to appear on the court. Thrown away passes were causing turnovers, and easy put backs from senior forwards Cooper Deneke and Jacob Ungles weren’t going in. By the end of the third quarter, the Spartans were up 36-27.

“I think [the rebounds] play a huge part in the game,” senior forward Cooper Deneke said. “It limits their shots and gives us chances for more shots.”

BHS was not going to stop its momentum. The Spartians kept the pressure on the Bruins. With five minutes left in the fourth quarter, the Spartans were up 41-32, and RBHS’ play did not seem to be getting cleaner. The opposing press left the Bruins in a state of panic, and for the first three minutes of the quarter they were having a hard time getting the ball across the half court line. As the clock showed just four minutes left in

“We dug ourselves a hole in the third quarter, we didn’t make some good decisions, and we got down, but you’ve got to give them credit.”

the championship game, however, RBHS took control back into its hands. They put up some shots and cut BHS’ lead to only five points. With just a minute left in the game, a timeout was called by BHS. The Bruins were down by one, 48-47, but they would receive the ball out of the timeout. Senior guard Brant Bowers entered the game having four fouls with only 60 seconds left to play and sank a three, putting the team ahead now by two, 50-48.

A few fast-paced turnovers left the score at 52-49 in the Bruins favor with only seven seconds on the clock and the ball in the Spartans’ hands. As the clock ticked down, BHS got off a three point shot that missed just to the left, and the buzzer blared. The Bruins rushed the court with shouts of joy and reverberating cheers.

“We dug ourselves a hole in the third quarter, we didn’t make some good decisions, and we got down, but you’ve got to give them credit,” head coach Jim Scanlon said. “Brant hadn’t scored in the whole game, he got in foul trouble, and then he hit two huge threes and Cooper got a put back. Our guys know, for districts this is kind of what our thing is.”

The Bruins will take on Ozark High School at 6 p.m. March 11 at Camdenton High School following the completion of the RBHS girls’ basketball sectional game.

Will you be making the trip to see the boys play March 11? Let us know in the comments below.