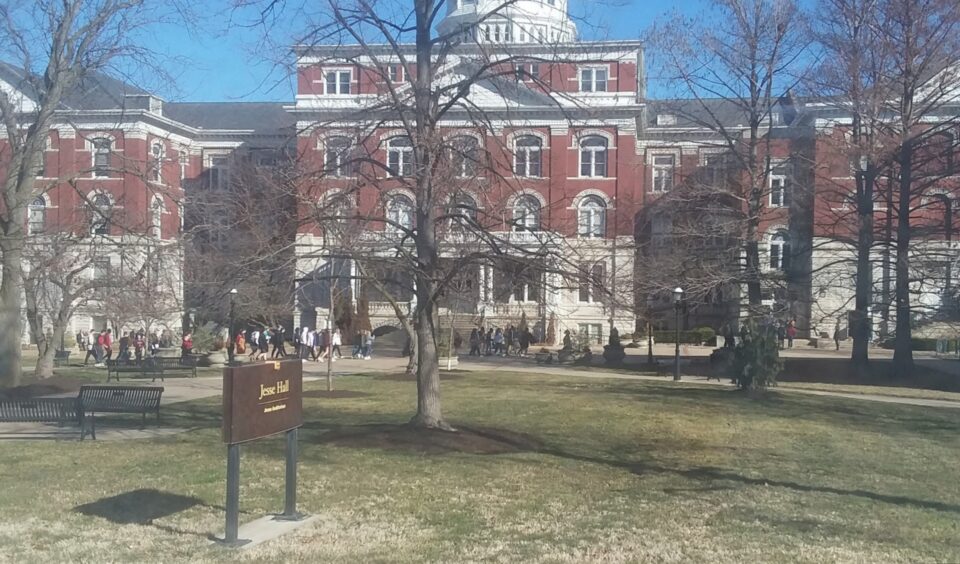 Rounds of school buses pull into one of the University of Missouri—Columbia’s narrow streets. Streams of high schoolers from RBHS, Hickman High School, Battle High School and Frederick Douglass High School pour into Jesse Hall auditorium, the venue for the 2020 Columbia Public School sophomore trip to the True/False Film Festival.

Large, colorfully decorated posters designate seating areas for each different school. In the hallway, True/False volunteers direct the incomers from each school to either the ground level section of the auditorium or the overhanging balcony. Nearly 500 RBHS sophomores thunder into the back right corner of the 1,700-seat hall, jumping over rows of bright red cushions to grab a seat next to their friends.

As more students enter the auditorium, a deep bass sound echoes from the front of the massive room. Each of the four members of NuBlvckCity, a jazz ensemble from Kansas City, Mo., warms up on the right section of the stage. The keyboardist begins to play an electronic melody, and the saxophone player chimes in with blaring tones to complement the lower octave keyboard notes.

As the music develops into one of NuBlvckCity’s original jazz songs, the energy from the increasing number of students is practically palpable.

“The keyboardist begins to play an electronic melody, and the saxophone player chimes in with blaring tones to complement the lower octave keyboard notes.”

The dreary school day morning feeling detaches from the excitement in the room. From the stage, the vocalists in NuBlvckCity sing and call out to the crowd, aiming to hype up the sleepy, straggling teenagers.

“Hey y’all, let me hear you give a round of applause for our lovely vocalist.”

After a rumbling cheer from the audience, the band bows one more time before walking off of the stage with their equipment. The teachers and students alike have settled in their seats and the noise level dims from a stream of shouts to a dull roar.

Behind the rows of seats, the two sets of double doors at the hall’s entrance thud to a close. The bright overhead lights dim at a slow pace until the only illumination is from the massive projector screen front and center. The True/False logo fades, and a quick commercial for the film festival replaces it, displaying photos and video clips from past year’s events.

Finally, the screen goes black and a hush fills the crowd, as jazz music envelops the room once again, this time from the movie itself. The 2008 Mardi Gras documentary, the “Order of Myths” begins to play, and everyone settles in for the show.

What was your favorite True/False film this year? Let us know in the comments below.

Bruins win district championship for fourth year in a row