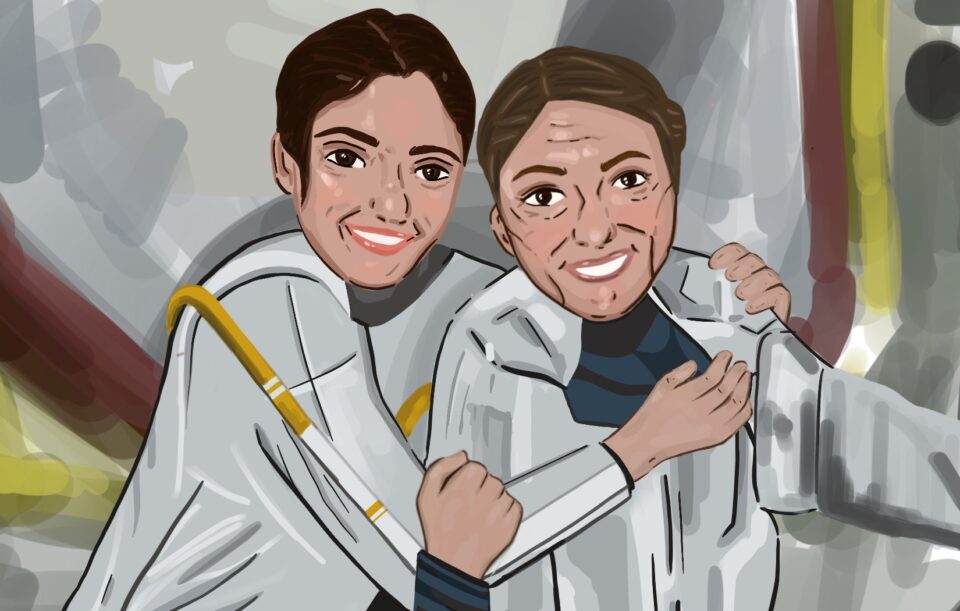 One small step for man, one giant leap for women

“Hey sky, take off your hat; I’m on my way” were female cosmonaut Valentina Tereshkova’s parting words as she blasted into space on the Union of Soviet Socialist Republics’ (USSR) spacecraft, Vostok-6, in 1963.

While this nation split up in 1991 because new democratic reforms conflicted with the original goal of maintaining communism, the USSR consisted of modern-day Russia, Georgia, Ukraine, Moldova, Belarus, Armenia, Azerbaijan, Kazakhstan, Uzbekistan, Turkmenistan, Kyrgyzstan and Tajikistan. Tereshkova was the first and youngest woman to participate in any solo spaceflight, two years after fellow cosmonaut Yuri Gagarin became the first man to breach the atmosphere in 1961.

Did you know?
A cosmonaut refers to any trained person from the Russian Space Agency, while an astronaut is a certified member of the National Aeronautics and Space Administration (NASA), the Japan Aerospace Exploration Agency, the European Space Agency or the Canadian Space Agency.

Born and raised in a small Russian farm village, Tereshkova developed an interest in flight after joining a parachutist club in her early 20s, according to Starchild, a service by the High Energy Astrophysics Science Archive Research Center (HEASARC) within the Astrophysics Science Division (ASD) at NASA. She made at least 150 parachute-assisted jumps from 14,000 feet altitudes in her lifetime. She later volunteered to be part of a cosmonaut crew for the Soviet Space Center and joined the Vostok-6 mission on June 16, 1963. Svetlana Savitskaya, also from the USSR, performed her first space expedition 1982, nearly 19 years after Tereshkova’s flight. Savitskaya was the first woman to spacewalk.

These women, however, were always accompanied by men.  It wasn’t until Oct. 18, 2019 that the first all-female spacewalk occurred, by NASA astronauts Jessica Meir and Christina Koch. RBHS science teacher Rex Beltz said Koch and Meir’s journey proved women could perform as astronauts just as well as men. Beltz participated in the Airborne Astronomy Ambassadors program in 2016, which focused on the development of STEM education in schools through professional development courses for select teachers.

One part of this two-year initiative was to partner with qualified scientists onboard the Stratospheric Observatory for Infrared Astronomy (SOFIA), NASA’s flying telescope, to collect data and perform experiments. While SOFIA was not equipped for space travel, Beltz and the rest of the team flew over about 99% of the atmosphere during the journey. He participated in this program with both male and female scientists.

“We can clearly see that people should be judged on their capabilities and nothing more,” Beltz said. “You should be chosen to be an astronaut based on your skill and the professionalism you will bring to the endeavor, not based on things that don’t impact the job.”

Did you know?
A spacewalk is any time an astronaut exits the vehicle they flew in while in space.

By the 1900s, the number of women participating in space programs increased, in part because of advocacy efforts by women’s organizations, such as the American Woman Suffrage Association to give women more rights occurring during this time. In the U.S., women gained the right to vote in 1920, after decades of reformative movements and petitions by activists from as early as 1869, when women’s rights advocate Susan B. Anthony formed the American Woman Suffrage Association. In terms of the workforce, Congress introduced the equal pay act, requiring the same wage for all genders, in 1945, and by 1963, President John F. Kennedy signed initiative into law. Before the act, employers enforced a wage gap between male and female staff members and women had restricted working hours as well.

“I hope our new batch of diverse astronauts not only inspires other females in STEM, but I hope it inspires everyone to look at the universe in a new light.”

In 1983, 20 years after the enforcement of the equal pay act, NASA sent Sally Ride, the first female U.S. astronaut,to space. Ride was aboard NASA’s seventh space shuttle mission, the Space Shuttle Challenger STS-7. The goal of the mission was to test NASA’s developing shuttle program and to see if a lighter craft could handle the air stress from a lift-off. While in space aboard Challenger STS-7, Ride was in charge of controlling and operating the shuttle’s robotic arm, in order to perform experiments in space without sending a human out of the ship. In order to further her passion in science, technology, engineering and math (STEM) jobs, she joined the education field. In the years after her trip to outer space, Ride focused on helping girls and women pursue careers in STEM fields by starting a program called Sally Ride Science at the University of California—San Diego. Since she was the first female to go to space, Ride wanted to encourage more women to pursue such career paths.

Although women were first becoming astronauts in the mid-to-late 1900s, only about 60 women have gone to space out of more than 560 total people. In an article Koch and Meir wrote for the Washington Post, published on Nov. 11, 2019, they said they felt their main success was equalizing exploration among people, men and women. Their achievement, they said, was acknowledging the fact that without all of humanity as a collective society moving forward in scientific advancements, attempts to reach any collaborative fixed end goal will not be complete. To battle gender inequality in their programs, NASA is making reformative efforts.

In 2024, NASA will launch a program from the Cape Canaveral Kennedy Space Center in Merritt Island, Fla., similar to the Apollo projects centered around landing on the Moon called Artemis. The Apollo missions were a series of spaceflights geared toward landing on the lunar surface and exploring human capabilities on the Moon with new technology. NASA’s goal with Artemis is to land both a man and a woman on the Moon to continue exploration of the lunar surface and test new, innovative technology. The Artemis project will continue to use the level playing field created for men and women in astronomical fields by the all-female spacewalk.

Beltz said the significance of the first all-female spacewalk increased because it tore down barriers preventing gender equality. He said no matter their gender, all astronauts in the field are trained and fully able to help the team, as shown by the all-female spacewalk. He said he hopes this step forward will encourage people of different races and genders to join STEM careers. Beltz said he believes the development of science and technology should be the ultimate goal of space exploration, with less focus on who performs astronaut duties as long as they are efficiently able.

“Anytime you have effective role models, you hope it inspires a new generation to continue carrying the torch,” Beltz said. “I hope our new batch of diverse astronauts not only inspires other females in STEM, but I hope it inspires everyone to look at the universe in a new light.”

For junior Kedzie Kratzer, the spacewalk in October motivated her passion to study chemistry, engineering or astronomy in the future. She said she wants the opportunity to teach other people and learn about different sciences for herself regardless of her gender.

From a professional standpoint, Koch said in a 2019 interview for NASA that the walk should improve the chance of people joining space programs because aspiring female astronauts derive encouragement from stories of people like herself. She said women and girls across the globe look up to her because they can relate to her passions.

Kratzer also said she believes the confidence of female astronauts influenced other women in the field, and motivated them to continue pursuing their interests.

“It was a great leap in history to show that women are capable of things men can do, too,” Kratzer said. “I think it inspired other females in the field because it showed that their work truly pays off, as well as paving the way for even more all-female spacewalks to occur.”

Did you know?
In 1972, federal law ensured that school education would be provided equally for both men and women, according to the American Civil Liberties Union, a non-profit organization dedicated to preserving citizens’ civil liberties through activism.

As more women are prompted to join the workforce, the gender divide in jobs related to astronomy, specifically in NASA, has become less prominent in recent years, according to data from NASA’s Astronaut Fact Book. The first seven out of 22 graduating classes of astronauts from NASA were 100% male. The introduction of more women in the field, however, decreased the extremity of the split. In the class of 2017, 45% of the class was female: an almost equal ratio of men to women. This in part could be the reason for October’s spacewalk happening years after the first people went to space in the 1950s; there weren’t enough opportunities for women to get an education to pursue the job.

“I think it’s disappointing that women had to wait 20 years until the first all-female walk happened, but I understand why it was hard, too,” Kratzer said. “It took women this long because they had to work harder to be seen as intelligent in STEM fields.”

While negative ideologies about women’s ability to work impacted their representation in becoming astronauts, there are purely physical variations as well. When sending men and women into space, there are biological differences to address before attempting a flight. A change in spacesuit size was a major factor that delayed NASA’s all-female spacewalk because the agency needed multiple medium-sized suit torsos for the astronauts, but only had one. The upper torso contains tubes to drain water from inside the spacesuit and controls oxygen flow to the astronaut. If the body of the suit does not fit, the person is not protected and daily tasks are difficult to complete.

Used with permission from NASA.gov

Koch and Anne McClain, another female astronaut, were set to perform the walk on March 29, 2019, but because of NASA’s limited stock of fitted spacesuits, Koch had to go with another man. In the same article for the Washington Post, Koch and Meir mentioned they wanted to break down the bias against physical characteristics from the restrictions of types of suits. After the issue with proper gear, NASA focused on resizing the attire to fit more body types.

Senior Jack Stevens, who takes the astronomy class at RBHS and is looking to pursue a career in celestial cartography, said NASA should accept and recruit all qualified agents, no matter one’s gender or body type. He, like Beltz, said he believes the purpose of the NASA program is to further space investigation, with less focus on who performs the research.

As technology and innovation develops in STEM fields, allowing for more exploration, corporations like NASA highlight inclusion throughout those working in the agency. In their Washington Post article, Koch and Meir said it is time to enter an era where anyone with an idea can contribute to the conversation regardless of his or her physical traits.

The goal to improve inclusion in the workforce, through hard work and dedication, is to involve people in the process. Kratzer said her journey to reach a successful job path in a STEM-related career will be difficult, but doable. She said she is willing to put in the time and effort to fulfill her ambition.

“It’s a hard career path, but I am very passionate about it,” Kratzer said. “I do not think it will be as difficult as it was following the path 20 years ago because people are starting to realize women are capable of anything men are.”

How do you think the first all-female spacewalk influences women in society? Let us know in the comments below.