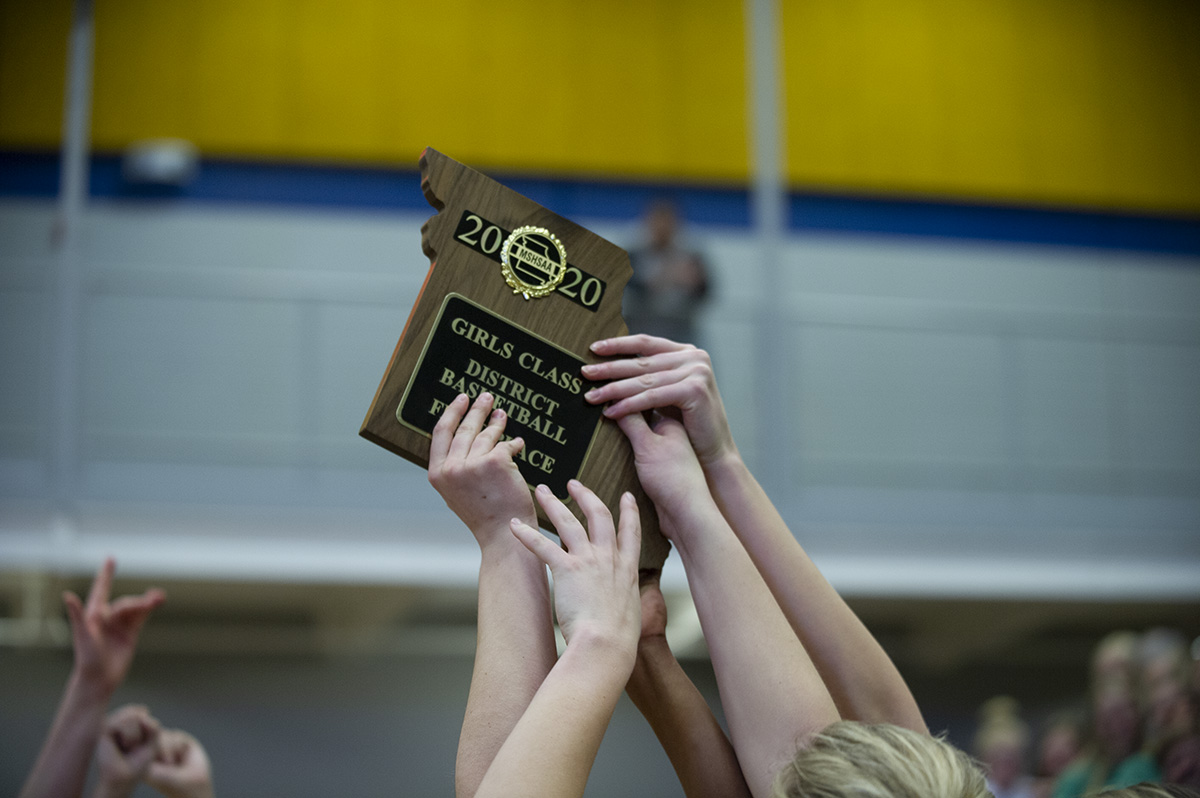 Having previously lost to the Jefferson City High School (JCHS) Jays the last time the Bruins played them, tensions in the gym were high. With the district championship at stake, it was crucial for the team to keep its nerves under control. RBHS took to the floor as its student section cheered the players on. The seconds before the game started counted down, and it was finally time for the tip off. Sophomore forward Kyrah (KK) Brody lined up for the Bruins. Brody won the tip, and the ball started in her team’s hands.

“They had 22 offensive rebounds the last time we played them,” head coach Jill Nagel said. “We saw every single one of them in film this week, and [the Bruins] weren’t happy about their performance on the boards. We said from the very beginning if we take care of the boards, we win this game.”

Despite concerns from fans, the Bruins proved they were the team to beat. They jumped out to an early start, scoring the first 17 points of the game. RBHS dominated the first quarter, leaving JCHS scrambling to call timeouts and try and regroup its offense. The team set the pace for the game from the moment play began, and continued to control the tempo for the duration of the competition. As the exceptional first quarter finished, the Bruins were up 25-4.

“We came out with a different type of energy. It was an energy that we’re not losing; we’re not going home. We really wanted this game.”

JCHS got a little traction under its feet in the middle of the second quarter, going on a five point run to make a small dent in RBHS’ impressive lead. However, the Bruin offense would not stop their offense with guards senior Eryn Puett, sophomore Averi Kroenke and junior Mary Primus making multiple threes. The Bruins finished the first half with a strong lead 39-17.

“We came out with a different type of energy,” Kroenke said. “It was an energy that we’re not losing; we’re not going home. We really wanted this game.”

With the height advantage the Jays favor, it was necessary for forwards senior Caitlin Hayes and Brody to keep the paint shut down. They accomplished this, and the Bruins extended their lead to 48-20 with four minutes left in the third quarter. JCHS did not let down and continued to fight but would only be able to cut the Bruins lead to 54-26 as the third quarter came to a close.

“We enjoy [our win] until midnight, and then when midnight hits, we flip the switch.”

Out of the gate in the fourth quarter the Jays wrestled to try and keep the damage under control. After a couple quick up and down the court runs the Jays went on a nine point streak to lessen the Bruins lead to 54-35. As time ticked down on the clock, Nagel pulled some of her starters in an effort to make sure everyone had time on the court. Senior guard Sanaa’ St. Andre, however, stayed on the court to ensure that they were able to break the Jays press, and she would end up being the one holding the ball as the final buzzer went off. The Bruins were now the Class 5 District 9 champions.

“We enjoy [our win] until midnight, and then when midnight hits, we flip the switch,” Nagel said. “We get to practice tomorrow. And tomorrow is my favorite practice of the year after a district championship because you get to practice.”

RBHS will take on Ozark High School (OHS) at 6 p.m. on March 11 at Camdenton High School in the sectional game. The Bruins played OHS on Jan. 9 and were able to win 63-40 during a home game.

Will you be making the trip to see the girls play March 11? Let us know in the comments below.

Bruins win district championship for fourth year in a row