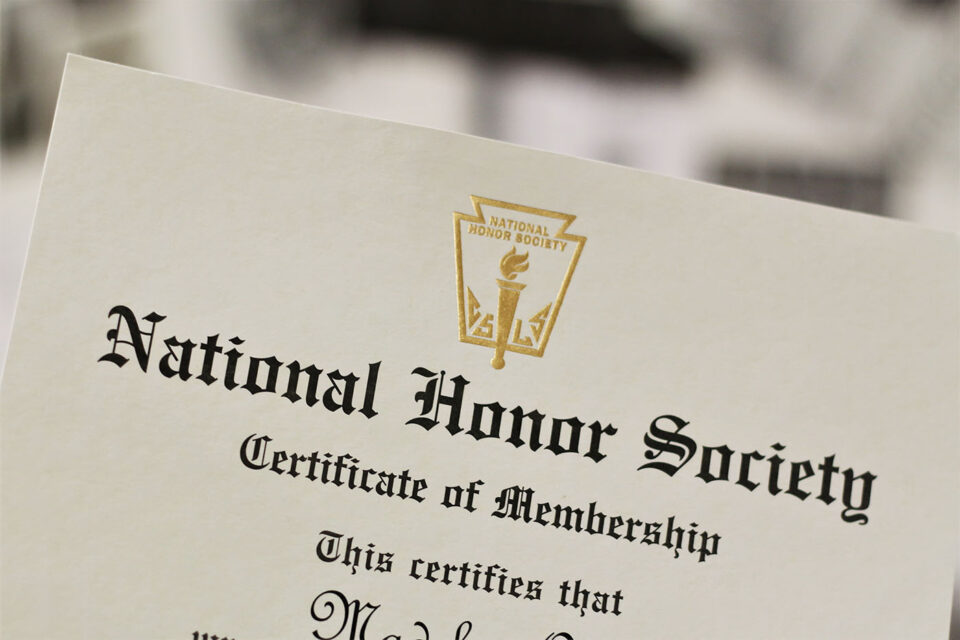 For the first time, RBHS accepted juniors, yet they haven’t been inducted

In the fall of 2019, RBHS National Honor Society (NHS), a student-led service organization founded in 1974, accepted, but did not induct, juniors into its ranks. An official induction ceremony is set to occur April 13 for both current juniors and sophomores.

So far this year the club has not met because lacking policies and structures such as student leaders, an adopted constitution and bylaws created unanticipated difficulties for NHS sponsor Stephanie Harman.

Harman, who was in charge of NHS at Salisbury High School, became the NHS sponsor for RBHS at the end of the 2017-18 school year. She took over sponsorship after sponsor Kaitlin EuDaly left CPS. Harman said the school did not have certain processes and guidelines, such as a formal application rubric, an adopted constitution and bylaws, which outline expectations, like NHS chapters she had seen at Battle and Hickman High School.

“When you change sponsors and the things that are supposed to be in place for a group like [NHS] to function, are not in place,” Harman said, “you kind of have to start from scratch. And that is kind of where we are at.”

“Yes, I think [holding an NHS meeting] would help everyone with understanding what we have to do.”

Last summer, Harman communicated with NHS sponsors at Battle and Hickman High Schools and said they plan to meet again this semester to align their policies, which she said include “developing a common application and rubric for membership as well as leadership positions, common expectations for service and character and common policies on removal of members who do not maintain their membership requirements.”

Harman said other RBHS changes to NHS include a faculty council, a teacher and staff member panel, that will assist in making membership decisions, a lower Grade Point Average (GPA) of 3.25 compared to 3.3 needed to apply and earlier inductions. She said the reasoning behind these changes is to align with the other Columbia Public Schools (CPS) high schools.

“Each school made concessions in an area. We dropped our GPA, one of [the other CPS high schools] raised the number of [service] hours, one of them dropped the number of hours,” Harman said, “and we decided to induct at the end of the sophomore year to match Battle.”

RBHS plans to hold an official induction ceremony for both juniors and sophomores April 13. In the past, RBHS had been inducting at the end of the junior year. Harman said she was interested in changing RBHS’s inductions to allow members more time to participate in and build the club. She said this year serves as a transition.

“Due to inducting new members at the end of the junior year, the continuity from officer panel to officer panel has been quite lacking. This has resulted in the chapter having a lot of irons in the fire – especially when it comes to service projects,” Harman said. “Each new officer panel picked their own ‘pet projects’ and when those officers left, we either just left those projects hanging or were beginning to get stretched too thin.”

Harman said old processes, such as inducting members at the end of their junior year, made it difficult to narrow down students who expressed interest in leadership last spring. Despite this challenge, Harman said she plans to create an officer panel at the end of the school year, although she doesn’t know if officers will be in place by the induction ceremony in April.

As far as the officer application, Harman said she hopes to release it soon and collect it after spring break. She said her goal is to have a couple officer meetings for rising juniors and seniors before the end of the year, along with summer work sessions in July and August.

Candidates will give speeches and all NHS members will vote for their preferred candidate some time in April or May. The officer panel’s job will be to choose and commit to carrying out several projects each year versus lots of projects that are left incomplete. 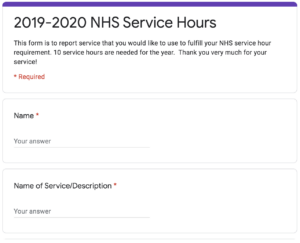 While current NHS seniors may not get to hold leadership positions because of the club’s current state, Harman said right now, seniors still have the ability to complete their service hours and record them on the club website. She said she would like current seniors’ hours logged before they graduate and said members should have received instruction on how to navigate the website last year during a meeting in May with the previous officers.

Junior Daniel Kang has not logged service hours, but said he might volunteer at The Food Bank for Central and Northeast Missouri. Senior Sarvika Mahto, who said she enjoys volunteering, has completed several service hours through Red Cross and the University of Missouri–Columbia hospital, although she doesn’t know if she has enough to maintain her NHS membership or if she will get revoked if she doesn’t report them soon.

While Mahto said she doesn’t have a strong interest in becoming a club leader, she said she is worried those who do might not qualify for the NHS Salute to Seniors scholarship, which was due to the counseling office Feb.13 at 8:55 a.m. To be eligible for the scholarship, NHS members must plan to attend a college or university, be a leader in the club and demonstrate good citizenship, moral character and academic achievement.

“When I saw the Salute to Seniors scholarship, I was like, ‘Wow, no one can apply for this now because we haven’t chosen leadership yet, so you don’t qualify for it,’” Mahto said. “That’s money that someone could have used to help them in college that they can’t use anymore.”

Harman, however, said NHS seniors have demonstrated strong character and “hold their leadership positions in all areas of their lives,” making them eligible to apply for the Salute to Seniors scholarship. The official national NHS website defines student leaders as “those who are resourceful, good problem solvers, and idea contributors.” For seniors who want to add NHS leadership to their resumes, Harman said she is not opposed to that idea but would like to have a conversation with those students about what they feel makes them stand out as a leader.

“No one has a technical title this year,” Harman said, “but that should not stop you from being a leader and representing the club well.”

“When you change sponsors and the things that are supposed to be in place for a group like [NHS] to function, are not in place, you kind of have to start from scratch. And that is kind of where we are at

Harman also said only three students have reached out to her through email asking about NHS requirements and plans since school started. Still, she said she is trying to be flexible with members as she has been faced with technical difficulties after the last sponsor left in 2018.

“When the officers left, I didn’t get access to the website until the beginning of October because it was all still set up with the other sponsor, which was okay because I happen to know the other sponsor personally, but we had to change all of the two factor authorization,” Harman said. “All of the passcodes were going to the old officers and sponsor, who have lost access to their CPS email and are not answering GroupMe.”

Even though the club hasn’t met, Mahto said it held a meeting following her induction junior year, so she can put it on her resume. She said a club should be more than something just to put on a resume, though. Kang said he joined NHS to meet new people, although he doesn’t know what to expect from the club.

“Yes,” Kang said, “I think [holding an NHS meeting] would help everyone with understanding what we have to do.”

With online access to club information and without a strong purpose to guide each gathering, Harman said the need for lots of meetings diminishes, although she said she wants to re-evaluate the need for meetings once the club has its leaders. She also said NHS attendance history at RBHS was not high last year because past meetings primarily highlighted information regarding available service projects, which students can access on the club’s webpage.

“If there’s not a goal for the meetings that’s important, I can see why you would skip it.” Harman said. “We don’t need to have a meeting for the sake of having a meeting.”

Currently, HHS senior Reyna Houston said her NHS chapter has officers and meets once a month. She said since her group is so large some members meet before school while others meet afterwards. She said her NHS officers at Hickman plan a variety of volunteer activities and promote them at meetings and in the GroupMe. So far, she said her group has volunteered at the Central Missouri Humane Society and The Food Bank for Central and Northeast Missouri. She also said they helped out at concession stands during sporting events and cleaned up the area surrounding Hickman.

Harman said once the club has its new leaders, which will be some time at the end of the school year, she wants to sit down with members and discuss Rock Bridge NHS’s role as a service organization and whether its job is to serve inside or outside of the school. She said she could use bylaws from her old school to speed up the process but didn’t feel that was appropriate and wants to help the club build a strong foundation.

“It’s just been really complicated on my end trying to get us back to a neutral starting point where we can really start from scratch and decide who we are, what our priorities are [and] what we’re gonna be known for,” Harman said, “instead of having so many irons in the fire.”

What do you think about the changes to NHS? Let us know in the comments below.