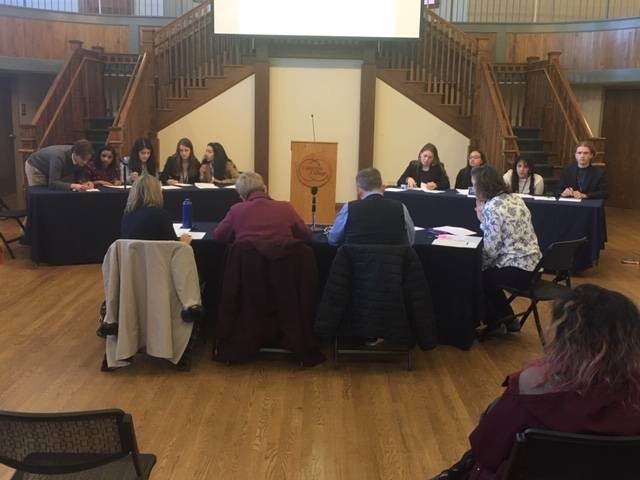 The University of North Carolina (UNC) at Chapel Hill, which hosts the National High School Ethics Bowl (NHSEB), is considering holding the competition virtually after announcing the cancellation of the in-person event March 11.

This year, the RBHS Ethics Bowl team won the state tournament, disrupting Hickman High School’s four consecutive years as championship, and qualified to advance to the regional match for the first time since 2015. The team then went on to win a bout against the Nebraska state champions, earning them a spot at the national tournament.

Ethics Bowl tournaments revolve around debating and discussing the philosophical merits of different questions surrounding that year’s cases, or situations with moral dilemmas provided by the NHSEB organization. Each round consists of two opposing teams of up to five students with two additional alternates. At the decision of a coin flip, teams alternate speaking first or second on two random questions and cases. Unlike a classical debate, however, the two teams do not have to present opposing answers to the question, and instead, are judged by how well they can support their ideas using ethical and moral philosophy.

Junior Gianna Durante, who has competed in Ethics Bowl since her freshman year, said she understands the cancellation was necessary to prevent the spread of COVID-19 but was dismayed the team, especially the three senior members, could no longer compete.

“I was really frustrated because we had spent a lot of time throughout the year working up to nationals,” Durante said. “It was especially disappointing for the competition to be canceled because I think we had a great team this year.”

I was really frustrated because we had spent a lot of time throughout the year working up to nationals. It was especially disappointing for the competition to be canceled because I think we had a great team this year.”

Although frustrated on behalf of her fellow teammates, senior Kanchan Hans, who competed as an alternate, said she was glad the event was canceled. She said she appreciated that the UNC prioritized the health of its students and competitors.

“I am in a unique situation because I have a compromised immune system due to my diabetes and a few other things,” Hans said. “While there is a lot of misinformation out there about [COVID-19], I feel that until we know more about the dangers that it’s good to be extra careful, especially when there’s people in our communities that are more susceptible to grave dangers if they were to encounter it.”

NHSEB Director Alex Richardson said he still hopes to host the tournament remotely, but the Executive Committee at the Parr Center for Ethics of the UNC at Chapel Hill, which plans and organizes NHSEB, as well as the NHSEB Advisory Board, are yet to come to a conclusion. Richardson said he is confident that given the unprecedented crisis, canceling the in-person event was the most moral choice considering the health and safety of students, staff and competitors.

“While we are, of course, disappointed in this outcome, we maintain our commitment to acting in the best interest of our community,” Richardson said. “We will be working quickly to explore and assess the possibility and feasibility of a virtual variant in the coming days.”

“While we are, of course, disappointed in this outcome, we maintain our commitment to acting in the best interest of our community. We will be working quickly to explore and assess the possibility and feasibility of a virtual variant in the coming days.”

Despite the uncertainty, Durante said she is hopeful that another means of competition will be available. She said that regardless of whether the NHSEB happens at all this year, she thought the decision maximized the wellbeing of the community and country.

“I think that in times of a pandemic like COVID-19, safety should definitely be the priority,” Durante said. “Although I was looking forward to the competition, I think it was a smart call because it prevented a lot of travel that could have spread the virus. Cancellations limit travel and large events where COVID-19 could be easily spread. Being able to slow the spread of the virus could potentially save lives, so I would say cancellation precautions are a very good way to keep students and families safe.”

Do you think organizations should hold canceled events virtually? Let us know in the comments below.