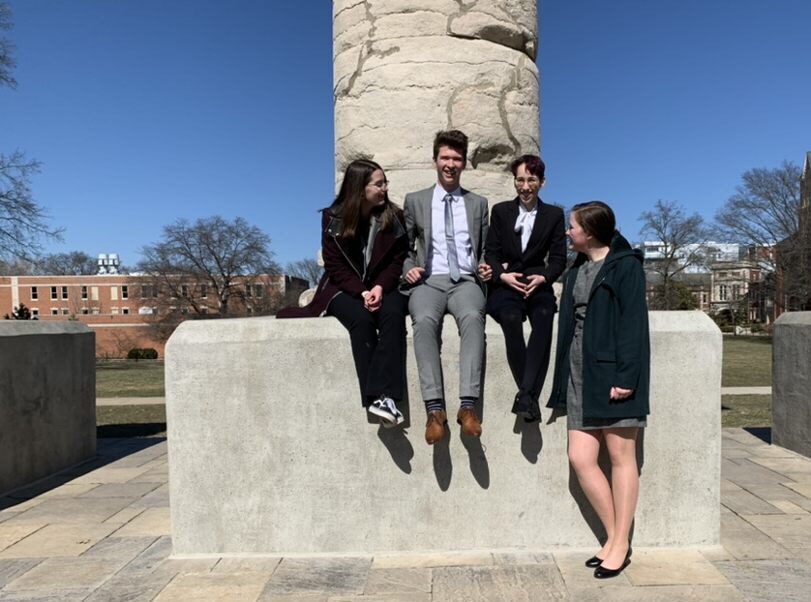 The RBHS Model United Nations (MUN) Team competed in its second tournament of the year, the first ever University of Missouri Model United Nations Tournament (MIZMUN), Feb. 29. The tournament had only two competing schools, Columbia Independent School (CIS) and RBHS, and one committee, in which students assumed their roles as delegates representing various countries within the Organization of the Petroleum Exporting Countries (OPEC) during the Cold War. Although the team did not win any delegation awards, junior Maddy Kovaleski won Best Position Paper.

For the past two years, portions of the team have competed in two different MUN tournaments throughout the year, Model United Nations University of Chicago (MUNUC), an international tournament with more than 200 competing schools, and Metro Kansas City Model United Nations (MKCMUN), a regional tournament with around 20 competing schools. This year, in addition to the other tournaments, sponsor Chris Fischer sent five interested RBHS team members to MIZMUN. He said he thought the tournament, although much smaller than MUNUC and MKCMUN, was a success despite several changes in plans.

“I know [the University of Missouri’s MUN team] has wanted to run this for a number of years. They have a general secretary that is really ambitious, but she and her staff are really good,” Fischer said. “I think they had planned to offer two or three committees, but they just ran out of students because Battle and Hickman opted out at the last minute. So I think they had a bigger vision than what actually happened, but still, it was really successful, and they did a really nice job.”

Although only six students attended the MIZMUN tournament, larger conferences receive more participants from the team. In November, Fischer selected twenty members of the RBHS MUN team to compete in the MUNUC tournament Feb. 6-8. Fischer said the team achieved more success this year than in previous years at MUNUC with nine students receiving Verbal Commendation, equivalent to third place, and one receiving an Outstanding Delegate award, equivalent to first place, in their committees.

Unlike MUNUC, which hosts both General Assemblies, large committees representing an active body of the United Nations, and Crisis Committees, smaller groups in which each delegate represents a character in a historical body, MIZMUN only offered one Crisis Committee to delegates. Junior Ellie Carver-Horner, who competed in a General Assembly at MUNUC, said she enjoyed the opportunity to participate in a Crisis Committee for the first time.

“I chose to compete because I genuinely just love Model UN, and I had never done a crisis before, so I thought it would be good practice,” Carver-Horner said. “It was super different from other MUN conferences I’ve been to because it was a lot smaller and over a shorter amount of time. It was also structured differently in the sense that the scenarios we were given and the way that the Crisis simulation was run was different than anything I had ever done.”

Similarly, junior Vincent Leloux, a German foreign exchange student, said he also appreciated the experience MIZMUN offered. Leloux, who competed in MUN tournaments before arriving in the U.S. as well as MUNUC, said he participated because he saw MIZMUN as a way to practice his public speaking and English skills.

“I really just wanted to compete to get better at Model UN and just competing in general,” Leloux said. “All of the speaking and collaborating is a really great way to learn the language better, at least for me, regardless of where the tournament is.”

I think Model UN is the one academic competition that makes students engage in nearly every 21st century skill that you’re going to be confronted with in life.”

Leloux also said MIZMUN was unique from any of the other tournaments in which he has competed. Students and staff at colleges with MUN teams have hosted tournaments like MKCMUN and MUNUC for several years. Carver-Horner said because the University of Missouri⁠—Columbia students had never run a conference, she was concerned about the organization of MIZMUN. She said, however, she was pleasantly surprised by the experience.

“It wasn’t what I expected,” Carver-Horner said. “it was a lot more organized and thought out than I thought it was going to be. I also didn’t expect the amount of effort that the college students put in to be as high as it was. They worked really hard to pass all of our directives and create news updates in really short amounts of time.”

Despite recent success, the RBHS MUN team will still continue to meet so interested members can prepare for the upcoming MKCMUN, April 1. Regardless of the scale of the conference or type of committee, Fischer said he believes regularly competing in MUN provides students with invaluable life skills.

“I think Model UN is the one academic competition that makes students engage in nearly every 21st century skill that you’re going to be confronted with in life,” Fischer said. “You have to collaborate, cooperate and work with people you don’t normally work with. You have to work with people that maybe sometimes [have] differences. You have to be a really effective communicator and good public speaker. You got to think fast on your feet. You [have] a problem to solve, and you have to research and prepare in advance. It’s just everything.”

Would you consider joining MUN? Let us know in the comments below.