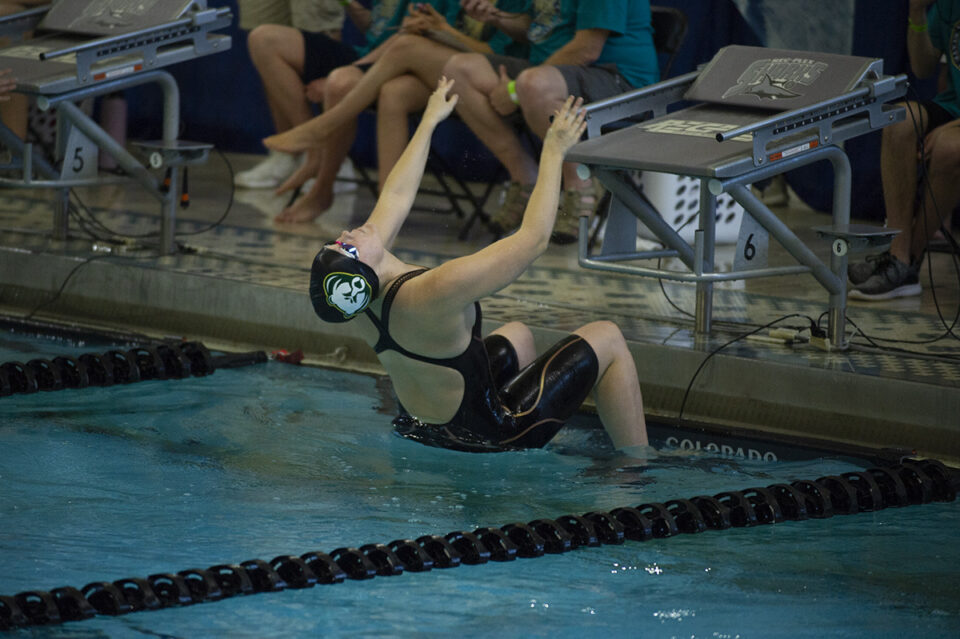 Junior Olivia Henderson takes off of the wall for her 100-yard backstroke. "I'm not happy with how I started that race," Henderson said. "I left my hips in the water because I was afraid of my feet slipping, but it definitely slowed me down." Photo by Turner DeArmond.

For the past eight months, I have been going to swim practice after school every day, as well as  Tuesday, Thursday and Saturday morning. My Columbia Swim Club (CSC) teammates and I have spent so much of our lives in the University of Missouri-Columbia’s (MU) pool, training tirelessly for two or more hours each practice. We put ourselves through hell on a daily basis, pushing our bodies to their limits.

Someone cries or pukes out of pain or exhaustion at least once per practice, giving it our all so we can perform at a high level at our end of the season meet. As miserable as it sometimes is, my teammates and I do what is necessary to swim well.

This year’s season was supposed to culminate in collective excellence during the weekend of March 12-15, at Speedo Region VIII Sectionals, hosted by CSC at MU’s pool. This was our championship meet, the one we had been training for all year. My coach mentioned sectionals nearly every day at practice and believed CSC could win the meet. “What are you trying to do at sectionals?” he would often say when it looked like we were getting tired. “Do you wanna win sectionals?” he asked to remind us of our goals when he knew we weren’t trying hard enough.

Wednesday, March 11 was the last practice before the meet was planned to begin. As I swam up and down the pool, I could see lifeguards hanging up a banner with the name of the meet plastered across it in bright red letters, and I smiled into the water. My body felt just right; the pool was the perfect temperature, and I felt energized. The team was in high spirits and ready to begin the meet.

My body felt just right; the pool was the perfect temperature, and I felt energized. The team was in high spirits and ready to begin the meet.

The excitement, however, disappeared that evening when MU released a statement saying administration was suspending all non-essential activities on campus in order to prevent the spread of COVID-19, including sectionals.

Did You Know?
COVID-19 is a previously-unidentified strain of coronavirus that has spread on a global scale very quickly, and has recently been classified as a pandemic by the World Health Organization.

How did you feel when sectionals and our meet in Florida were cancelled? What will you do from here?

I was sitting at home alone when our coach sent out the message. Immediately, my eyes welled up with tears. After catching the flu and being unable to swim at this same meet last year, this year was supposed to be my redemption. My friends, seniors Reagan Richards and Ansley Barnes, were supposed to celebrate their last meet with CSC. Everyone’s hopes for what we would achieve shattered in an instant.

The cancellation has taken more than just an emotional toll, though. For swimming, collegiate recruiting begins after the conclusion of sophomore year. Juniors like myself, fellow RBHS juniors Mara Manion, Elise and Olivia Henderson and Father Tolton Catholic High School junior Lauren Hervey have been talking to colleges for just less than a year. We are set to commit to a certain school by this November and have been telling colleges to pay attention to sectionals, above all else. This meet was supposed to be our one last exhibition of how fast and how competitive we can be, our final chance to show our schools of choice we deserve a spot on their team.

“What hurt the most was I didn’t even have a chance to show how I can perform.”

Despite being unable to swim at sectionals, the team had a light at the end of the tunnel: we planned to attend a meet down in Florida during spring break. We shed a few tears, but we were united by the small hope we could, at least, get one last chance to demonstrate to college coaches we had what it took to swim for them.

The next day, we had a rude awakening. On March 12, USA Swimming released an update stating all events, camps, conferences and other swimming-related activities are cancelled for the next 30 days.

My hope fell apart as I scrolled through the article. I excused myself from Precalculus and broke down in tears in the bathroom. While I knew I still had a chance to swim in college, I felt like it was damaged. If I were a coach, would I take a swimmer who has proven he or she deserves a spot on the team or a swimmer who I hadn’t had a chance to see perform at the top of his or her game? If I chose the latter option, I would be taking a huge gamble. Maybe the second swimmer could swim faster than the first, but maybe he or she would be slower, and I would have wasted an opportunity to improve the team.

If I were a coach, would I take a swimmer who has proven he or she deserves a spot on the team or a swimmer who I hadn’t had a chance to see perform at the top of his or her game?”

What hurt the most was I didn’t even have a chance to show how I can perform. If I did poorly in a race, at least I was able to swim and could learn from the experience. In this situation, however, I had no control over my own fate. I simply didn’t have a chance.

My coach sent out supportive messages in our group chat. He pointed out how our strokes have still improved, we kept our bodies in shape and bonded with one another over the months of practice. Since the pool would be closed and we would be unable to practice, he recommended a break from swimming and for us to have fun and enjoy each other’s company.

These kind affirmations have lightened my grim mood despite all that has happened. Even though this will set back my recruiting process and be a huge headache, where we are is uncharted territory. There is no protocol for recruiting during a pandemic. Additionally, because the setbacks I am facing are not exclusive to Columbia, with even collegiate and professional sporting events being postponed, college coaches should be understanding. Although I don’t know what exactly their plan for recruiting will be, I hope they won’t let these experiences reflect poorly on me or other swimmers in similar situations.

I still have a chance to prove myself this summer at another meet, which is incredibly comforting. At the beginning of my recruiting process, one of the coaches I am communicating with said he would pay attention to my meets in the summertime, meaning he will still take the next sectionals into consideration. Unfortunately, summer sectionals is now my only shot. I will have to practice as hard as I can every day until then. I can’t afford to slack off.

“I will have to practice as hard as I can every day until then. I can’t afford to slack off.”

Although it would have been nice to perform well at sectionals and give myself a safety net in case I had become injured, sick or swam poorly during the summer, what is most important is I still have a chance to perform well. Yes, this experience has been awful — inconveniencing both me and the coaches at the universities I hope to attend, and I will be unable to afford even the slightest mistake at summer sectionals — but it could be worse. I still have the opportunity to swim this summer, and college coaches have said they will be sympathetic and willing to adjust their actions, whether this is through adjusting their timeline of when we must commit or by forgiving the fact that we did not have a championship meet.

All in all, I am still hopeful. The pressure to perform well will definitely be weighing on me a few months from now when I am behind the blocks, but I will be absolutely prepared for those races and insanely thankful I am able to swim them. Until then, I will continue to update college coaches on my situation and ask what they require from me, doing all I can to make up for what I lost.

How has COVID-19 affected your athletics season? Let us know in the comments below.

An ocean away: Yangchun, Guangzhou

What should I do to prevent the spread of COVID-19?