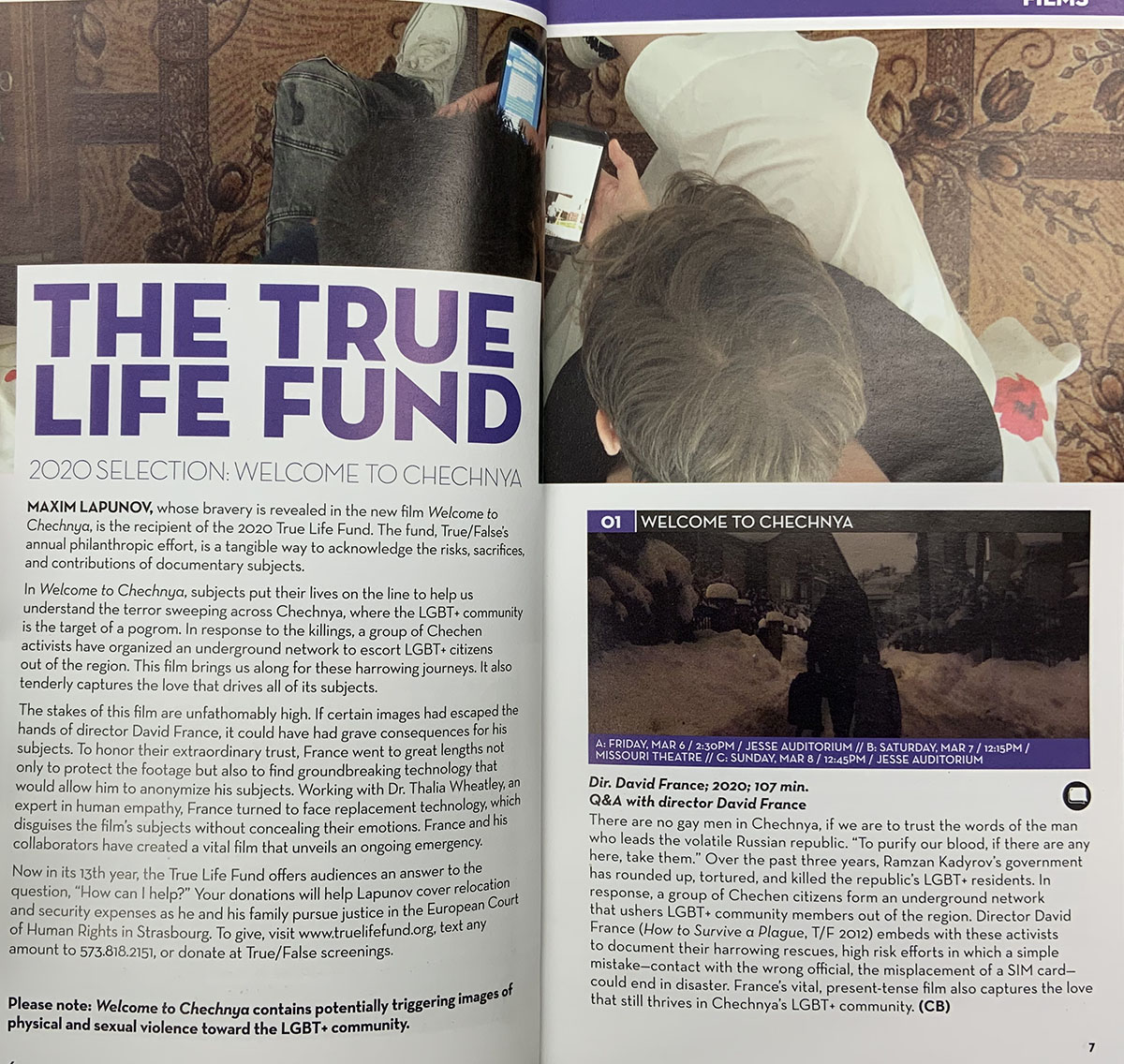 An ocean away a horrific injustice is occurring under Russian supervision: a massacre labeled an anti-gay purge. Since 2017, the Chechen government has been kidnapping, torturing and killing LGBTQ men and women. Not only are government officials enacting these horrendous murders, but relatives of such individuals are also encouraged to kill their LGBTQ family members without punishment as well. Directed by David France, who also directed former True/False Film Festival documentary How to Survive a Plague, Welcome to Chechnya illuminates the crisis by following activists aiding victims and LGBTQ individuals trying to escape Russia.

Welcome to Chechnya covered a heavy and controversial topic in today’s world. I think France was highly successful in addressing the sensitivity of the subject as well as capturing the pure emotions of the scenario.

I think no matter how hard the truth is, it’s incredibly important to listen to and understand. France did a good job of easing the viewer into the gruesome facts and filmed each bit in full respect to the victims.

France filmed footage inside a secret safe house in Moscow where survivors came to find a way to escape the Chechen purge. People usually only stayed for 15 days until activists contacted countries willing to house the victims. Eyewitnesses in the safe house detailed the scenario; people were kidnapped and taken to holding cells then tortured, starved and raped. Some were brutally beaten with fists or batons, stabbed, electrocuted and waterboarded. One man died when officials put a rat on someone’s back, covered it with a pot and heated it until the rat tried to escape by crawling through the man’s skin.

Although I cringed at the mention of the torture, I fully support the addition of these facts in the film. I think no matter how hard the truth is, it’s incredibly important to listen to and understand. France did a good job of easing the viewer into the gruesome facts and filmed each bit in full respect to the victims.

Chechen leader Ramzan Kadyrov was interviewed denying the gay purge but telling the world to take their LGBTQ citizens. By the spring of 2017, more than 100 men had been rounded up and Kadyrov continued to deny the existence of gay men in Chechnya.

France digitized the faces of sensitive individuals who were being hunted by the government, a feature done exceptionally well. One such major subject changed his name to “Grisha,” a man who survived 12 days of torture until being spontaneously released. France followed Grisha’s journey back to his partner of 10 years, out of Russia and a reunion with his family, who were also put in danger as a result of Grisha’s sexual orientation.

Throughout the film, bits and pieces of footage intercepted and attained by LGBTQ activists added perspective to an increasingly dangerous situation. One short recording showed attacks on gays who were caught in a car. In another, a woman is dragged into the middle of the street at night by a family member. He bashes her head in with a boulder. A final harrowing video shows a man being raped by police. Each minimal second video was added for a purpose: to convey the horrible reality of LGBTQ individuals in Chechnya. Although each was difficult to watch, it was important to understand the blatant evidence and the documentary was well done in each addition.

The director follows a dangerous rescue mission to save a woman from her uncle who discovered her sexual orientation and threatened to reveal it unless she had sex with him. France said he had to film parts of the documentary with a cell phone because of the high levels of risk each situation brought. The woman, “Anya,” was placed in an apartment somewhere in Europe. She went missing months later.

At a certain point in the film, France is interviewing one of the activists who details the importance of one of the victims coming forward to testify on the injustice. Taking a stand against Chechnya and Russia could lead to dire consequences, it requires revealing a name and a face, a fact that can help officials hunt the defendant down. The intensity of not only this moment but the rest of the film was so well done my pulse was racing for nearly all 107 minutes of Welcome to Chechnya.

Welcome to Chechnya was phenomenally done and will forever mark history as documentation of the dangers of corrupt government and the prevalence of love in the face of death.

“Grisha,” after escaping Russia, sentenced himself to these consequences and returned to Moscow to speak out. Maxim Lapunov became the face of the anti-gay purge in Chechnya, violence that has begun to spread to other parts of Russia. As soon as Lapunov revealed his identity, the digitization of his face slowly subsided. The absolute power in this phenomenal moment brought a wave of emotions over the viewer.

Welcome to Chechnya was phenomenally done and will forever mark history as documentation of the dangers of corrupt government and the prevalence of love in the face of death.

True/False 2020 selected Welcome to Chechnya as its True Life Fund recipient. The True Life Fund “offers audiences an answer to the question, ‘How can I help?’” as stated in a free True/False booklet. The audience was suggested to donate to Lapunov in order to cover relocation and security expenses as “he and his family pursue justice in the European Court of Human Rights in Strasbourg.” To give, visit www.truelifefund.org.

France ended the film detailing international aid of the situation in Chechnya. In the first two years of the purge, the activists helped 151 escape to safety. Canada has taken 44 people.

How do you think the world should respond to this injustice? Let us know in the comments below.