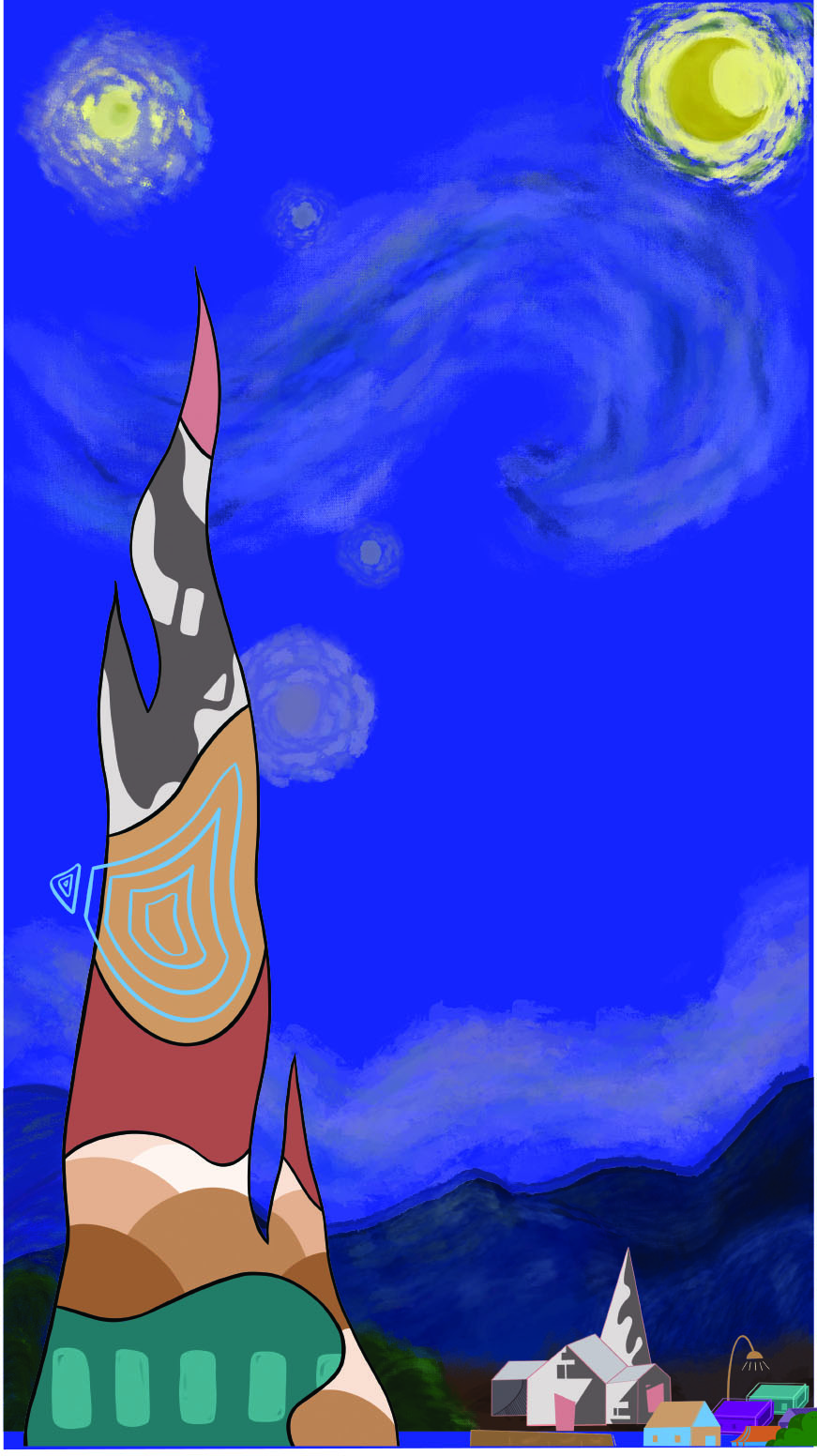 The Institute for the Future and Dell Technologies conducted a study that concluded 85% of the jobs that will exist in 2030 haven’t been created yet. The fast-paced, evolving technology of the modern century has changed the process and application of various disciplines — everything from journalism to engineering.

The digital age has impacted art expression, as well. Dennis Gyst, vice president of OWDT, a web design company, said digital art began in the 1980s “tentatively” when the personal computer appeared in the market in the United States. Now, when Forbes reported the average human spends most of his or her waking hours behind a screen, Gyst said there is a digital art revolution.

The Columbia Area Career Center embraced digital art in the early 1990s in order to teach students literacy in computer applications. Classes like Multimedia and Electronic Publishing aimed to help students navigate applications such as Microsoft Word and Microsoft Paint. Digital Media teacher Jeffery Cochran said he originally did not plan to teach a digital art class, but his job field adapted to include graphic design.

“I began my career teaching business education classes, which included computer applications and some basic Desktop Publishing,” Cochran said. “My original interest didn’t focus on the art and design side, but through experience and earning a master’s degree in Educational Technology, I’ve grown much in my design and digital media-type skills.”

Digital Media teaches students applications such as Adobe Photoshop and Lightroom. RBHS alumna Maddy Mueller, who graduated in 2015, is a freelance illustrator and designer. She said she developed an interest in digital art from around age 11 and has now practiced art more than half of her life. In the beginning she said she utilized a mouse to create rough sketches, but her skills developed to a higher level when she began using a tablet.

“I started drawing digitally because, at the time, I was really into a couple of websites like “Neopets” and “DeviantArt.” [All my friends] did digital art, so that’s why I started doing it, too,” Mueller said. “I didn’t previously have much of an art background other than generally enjoying drawing.”

“Even if our students have no plans to pursue art beyond our class, we hope they leave with a better understanding of how imagery works in our society and its complexities.”

Twelve years later and in this past summer, Mueller graduated from Washington University in St. Louis, where she received a degree in Communication Design. Now, she works full-time for Tremendousness, an art agency that helps companies bring their ideas to life. The company aims to organize important and complex information into engaging and impactful visual story forms.

Cochran said he hopes to prepare his students for real world application. He said his students engage in “project-based learning,” which utilizes student creativity to create different types of multimedia from magazine design to movie trailers.

“Our advanced students have the opportunity to work with professional clients who come to our classes to ‘pitch’ their idea,” Cochran said. “Many times students compete to win prizes or gift cards from the client or contest.”

Students are able to win contests by taking Digital Media and Graphic Design. Mueller said she was fortunate enough to apply digital art through her high school activities, such as various art contests. She said her experience as the Art Editor of RBHS’s journalism website, “Bearing News,” and newspaper, “The Rock,” where artists illustrate different featured images, comics and infographics, mirrored her college art experience “way closer” than Studio Art and Advanced Placement (AP) Art.

“But, keep in mind, I went to college to learn a commercial art [illustration], which is usually about communicating other people’s ideas,” Mueller said. “I think my answer would be different if I had gone to school for studio art instead.”

“Our advanced students have the opportunity to work with professional clients who come to our classes to ‘pitch’ their idea. Many times students compete to win prizes or gift cards from the client or contest.”

While RBHS journalism artists complete their assignments digitally, specifically in recent years, art teacher Abigail Gorsage focuses on teaching a different type of media to her students. Through the use of oil paints, acrylics, markers and more, Gorsage applies traditional art media to guide the curriculum of her Art Studio 1, Art Studio 2 and AP Art Studio 2 classes. Gorsage said the courses attempt to help students achieve art literacy, a general understanding of how to view art.

“The art curriculum has changed to incorporate more of an understanding of visual literacy and communication,” Gorsage said. “Even if our students have no plans to pursue art beyond our class, we hope they leave with a better understanding of how imagery works in our society and its complexities.”

Senior Reece Furkin, who is enrolled in AP Art 2, said she prefers traditional art because of its wider variety of applications compared to digital art. Furkin said she generally prefers studio art and hopes to champion various art forms, whether traditional or not, through the FOLIO magazine, where she serves as an editor.

“I think the problem with digital art classes at RBHS is that they focus a lot on the advertisement industry,” Furkin said, “which [is a reason] why I never took Digital Media at the Career Center.”

The RBHS fine art department offers no classes to further students’ skill in digital art. Furkin, who plans to go into traditional art after high school, usually employs mixed media techniques in her art by using a combination of traditional art, such as oil paints, on non-traditional mediums, such as cardboard or reused paper. In her class assignments, projects must creatively collage different designs to enhance a theme or message . Along with teaching, Gorsage is writing and illustrating a children’s book, “The Folklore Friends Food Truck Fest.” She said while she doesn’t wield an Apple Pencil or some other digital art stylist, she does implement mixed media in her book.

Gorsage said “The Folklore Friends Food Truck Fest” is an alphabet book for older readers where each letter is a folklore character that serves bizarre foods from a mobile food cart or vehicle.

“I’m not a classically trained illustrator. My art experience is all over the map due to the nature of my art education background. You have to be able to teach a variety of mediums.”

“The foods start with the same letter,” she said, “so it becomes a silly book of alliteration. It all really started with a linocut print I made of a yeti serving frozen yak yogurt, and thus the idea was born. I’m not a classically trained illustrator. My art experience is all over the map due to the nature of my art education background. You have to be able to teach a variety of mediums.”

Gorsage said this project is near and dear to her heart, even if her kids aren’t old enough to completely understand the book. Because Gorsage wants to protect her message of artistic uniqueness and have absolute artistic license, she said she plans to publish independently.

“I’m a mom of two, so we read a lot of books, and I’ve always been drawn to children’s books for the fantasy and imagination they provide to readers, but also to the creators,” Gorsage said. “That was why I chose to go in this direction as opposed to another literary form.”

“I don’t think one method is inherently better or worse than the other, but they’re both important to learn.”

Gorsage said her book is in the early stages of development, but she has developed the core ideas. In the end, Mueller, Cochran and Gorsage all said digital and traditional art carry their own merits. While digital art is a growing industry — and Mueller said “the consensus is that you have to know digital art if you’re a professional these days” — there is no harm in mixing media, even between digital and traditional. Mueller said the purpose of art is to tell a story, whether it’s a quirky children’s book or a sleek infographic, and said the power of art to convey meaning is what interested her in the first place.

“I think one should be well-versed in both traditional and digital media because leveling up in one area automatically levels you up in the other,” Mueller said. “We would benefit from learning more traditional skills. I don’t think one method is inherently better or worse than the other, but they’re both important to learn.”

How have you seen art change during your lifetime? Let us know in the comments below.