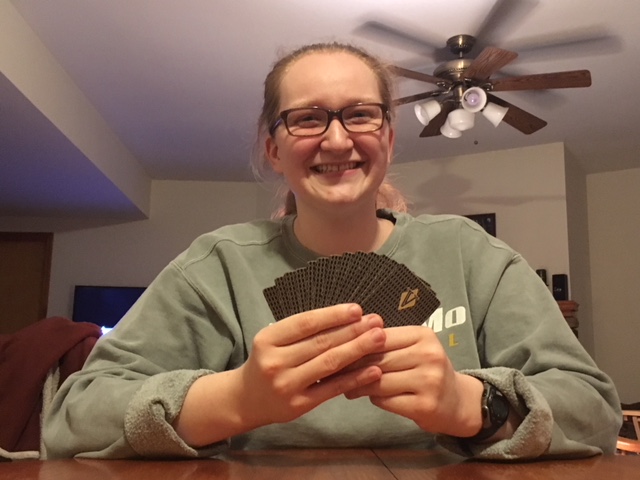 There’s no rest for the weary. Today is April 3.

My body and I have different ideas of how much sleep is necessary to function. It seems 8 ½ hours just isn’t enough. As much as I wished I could have slept in later today, I had to wake up at 9:45 a.m. to be ready for my 10 o’clock Zoom meeting with the newspaper’s artists and writers. I tossed on the first non-pajamas clothes I saw and brushed my hair. Still bleary-eyed I grabbed my computer and made my way to the kitchen. My mom (who is the class’ teacher/advisor) and I set up our computers and joined the group.

With as much uncertainty as there is about the explicit impact the pandemic will have on our education and what the rest of our school year looks like, I want to make each day count.”

We spent the next hour or so figuring out which artist will create which online advertisement and infographic. By the end, everyone seemed happy with their assignments, and a few artists even decided to take on extra work in the form of creative projects and photo illustrations. Because I have virtually no artistic talent of my own, I am constantly impressed by the work they do. I am excited to see what they come up with and how they create their assignments. I am optimistic their contributions will help our website place highly in the upcoming National Scholastic Press Association’s Best of Show competition, which takes place in a little less than two weeks.

After the Zoom call ended, my mom and I FaceTimed with my fellow Editor-In-Chief, senior Anna Xu, to discuss our plans for the rest of the “break.” We don’t want to assign anyone too much work, but this truly is an exciting time to be a journalist. There is breaking news every day, and the coronavirus is impacting so many people in a countless number of ways. With as much uncertainty as there is about the explicit impact the pandemic will have on our education and what the rest of our school year looks like, I want to make each day count. Our staff has worked hard all year to (hopefully) win Pacemaker, a nationally recognized award for high school publications. During our last big push near the end of judging, I am positive our journalism family will come together to make Bearing News look stellar.

When we hung up, I realized I hadn’t eaten anything yet and it was almost noon. I poured myself a bowl of cereal and enjoyed an episode of Criminal Minds while eating. A little after I finished, I decided to finish the fourth part of a feature story about the environment I had started back in November. I began the series as part of our “Crisis on Planet Earth” package during the website’s Best of Show judging last year. Because of our time crunch, though, I ran out of time to complete it. This final installment centers around the importance of legislation and political action in protecting Earth’s climate, reducing air pollution and furthering sustainability. I had already organized my quotes, so writing the complete draft didn’t take too long. By the time I was done, my story was 1,288 words. I am sure the length will change a bit during the three drafts before I publish, but I like how the organization and structure turned out.

I had intended to go for a walk today, but by the time I had a chance to get outside the sky had opened up and started to rain. Instead, I hung out with my mom for a little bit and watched a few more Criminal Minds episodes before dinner. I promise I’m (probably) not addicted. It’s just such a compelling series I have a hard time stopping. I had to hit pause, however, when my mom called us to the table. Because today is a Friday during Lent, we had a meatless meal of mac and cheese.

“It is not the strongest of the species that survive, nor the most intelligent, but the one most responsive to change.”

After we all finished eating and cleared the table, we headed downstairs to play Spades. For the first game, my dad and I were partners against my mom and brother. We crushed them. Brutally. By the end of the game, the score was roughly 521 to 96. After their defeat, my mom and I switched so she and my dad were partners against my brother and me. The second game was far closer, but ultimately we lost. I’ve missed spending time as a family without the seemingly constant stress of school. I’m really looking forward to hanging out with them more as the quarantine continues.

“It is not the strongest of the species that survive, nor the most intelligent, but the one most responsive to change.” ― Charles Darwin, naturalist

How did you spend your seventeenth day of social distancing? Let us know in the comments below.