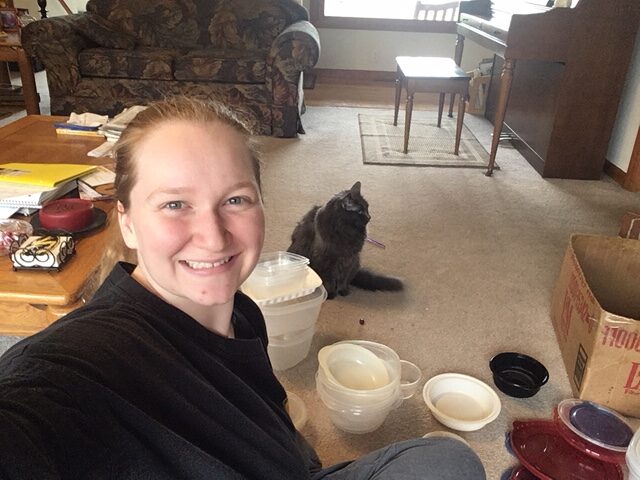 If eating banana bread burned as many calories as running, I would be in amazing shape. Today is April 4.

Because neither rhyme nor reason dictates when I can wake up, I slept through all of my alarms this morning. Upon opening my eyes around 9:45 a.m., I quickly recalled the dream I was in the middle of. In my dream, though the logic is extremely faulty, my family and I used a boat to cross into Canada where we had to help with a dangerous hostage situation that ended up happening in outer space. I have absolutely no idea how to interpret what that means, but my guess is Sigmund Freud would have had a field day.

In my dream, though the logic is extremely faulty, my family and I used a boat to cross into Canada where we had to help with a dangerous hostage situation that ended up happening in outer space.”

Regardless of what convoluted message my brain was trying to tell me, I had a late start to my day. After enjoying a breakfast of leftover biscuits and gravy, I decided to cross a chore off my to-do list: organizing our Tupperware. For the last week my dad has complained he can’t find the proper matches for the various lids and containers we have, so I decided to sort through them. I brought the two boxes of Tupperware we usually keep in our pantry out into our living room where I proceeded to dump their contents into a pile on the floor.

I separated the items into four piles: round containers, square containers, round lids and square lids. For the next half hour, I separated matching pairs and rearranged them in the boxes for easy access. I ended up having an entire extra pile of “miscellaneous” lids and containers without pairs. I would guess their lost counterparts are hidden somewhere in the nooks and crannies of our kitchen, but we may have to throw away or recycle them if we can’t find their missing halves.

After completing this task, I took a break and watched my new favorite intense police procedural, Criminal Minds. The season seven finale made my eyes a little misty, so to brighten my spirits I decided to make some more banana bread. My mom told me we had some frozen bananas we needed to use up, so I pulled them out to thaw. I used my usual recipe and ended up having enough bananas for two loaves. Making the first batch of bread went smoothly, but when I went to add the sugar to my second batch, I accidentally added ½ cup instead of ⅔. I realized my mistake and guesstimated the remaining amount to add. I baked the loaves for about 77 minutes, which left the end results crunchy on the outside and moist on the inside.

During the course of the day, I ended up finding a few new songs to listen to, one of which is perfect for a pandemic. When I was sorting Tupperware, I listened to “As It Seems” by Lily Kershaw. Her voice is full of emotion, and the song seemed appropriate for a period of change in one’s life. While I was baking, I played “Atlantis” by Seafret. I hadn’t heard the song before, but I like the band and found the music had a certain passion and energy behind it. “Atlantis” made me want to sway back and forth and sing along as I worked. Last night, I also stumbled across Alec Benjamin’s recent song “Six Feet Apart,” which relates to the loneliness and isolation some people are experiencing during this time of quarantine.

“Always go too far because that’s where you’ll find the truth.”

Each of these tunes set a different tone for my day, but all of them were absolutely appropriate for how I was feeling. For some reason, even though I hadn’t done much today, I had a pretty low energy level and ended up lounging around for the next several hours. I spent my evening playing Spades with my family. Tomorrow I’m hoping to start reading Aldous Huxley’s Brave New World and watch a movie with my dad, which will be a nice way to keep my mind engaged and not allow myself to become too lazy during my time away from in-seat school.

How did you spend your eighteenth day of social distancing? Let us know in the comments below.