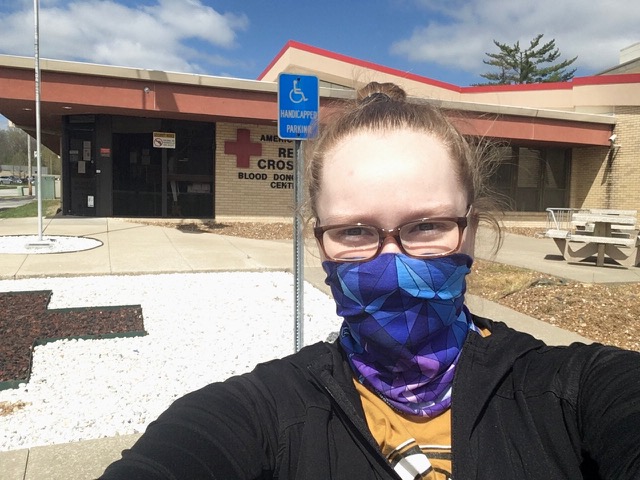 Time begins to lose its meaning when every day feels the same. Today is April 13.

Sleep evaded me last night, and I ended up drifting off well past midnight and waking up at 8 a.m. I’m not sure why my body insisted on such an awfully early hour, but I didn’t resist and instead read for a while as the morning sun painted the world outside my window. I’ve never really been much of a morning person (the night and I are far more agreeable), but the stillness and quiet our house holds when I’m the first one awake is a treat I treasure.

This whole mini documentary interview experience feels unreal, and I really don’t want to somehow mess it up. I am so used to being the one conducting the interviews, I’m not quite sure how to be the interviewee. I have my fingers (and toes) crossed. I just hope it all goes well.”

I relished the slow start to my morning, and had a bowl of cereal while staying in pajamas. Around 10:45 a.m. I got ready to leave the house for the second time in the last 27 days. Despite the chilly weather, I put on a short-sleeved shirt because I was going to the American Red Cross Blood Donation Center to give blood. Today was the first day I was eligible to donate again because I had waited the necessary time between donations, and I’d been planning to go for weeks. I’d scheduled my appointment, filled out the Rapid Pass checklist of medical and travel history questions on my phone (to make sure I was healthy and able to donate) and made sure I had my driver’s license, mask and gloves.

When my mom and I got to the center, however, I quickly discovered it was closed. I felt frustrated, confused and annoyed because I hadn’t gotten so much as an email before leaving the house telling me I wouldn’t be able to donate. My dad and I had scheduled our appointments to give blood at different times today, so I couldn’t understand why the Red Cross hadn’t let us know that we would no longer be able to come in. To figure out what had happened, I tried calling the organization’s phone number. After seven dropped calls (I must have the worst cell service in the world, right?) I finally reached a worker who gave me a kind but generic answer about how there must have been an issue with staffing for the center to close.

I still wanted to give blood, so I opened the app again and signed up to donate Wednesday at the blood drive RBHS is helping host at Stephens College this week. I don’t love the idea of being around lots of people (which I assume will be the case since blood drives tend to have a waiting period before donating), but I am trusting the Red Cross to have a safe and efficient protocol to prevent any potential exposure to illnesses of any form.

After arriving home and enjoying a late lunch, I carried on with the rest of my day. At 2 p.m. I had a pre-interview with a video journalist with the Columbia Missourian who is doing a mini documentary about the journals I’m doing as part of a larger series. For the last 27 days I’ve kept track of what I’ve done and how the COVID-19 pandemic has affected my life. All the pre-interview consisted of was us talking and her telling me how the actual interview will work. It’s crazy to think of all the stories I’ve written and activities I’ve been involved with that this would be the one someone cares about. Why anyone would want to read about my mundane life and then do a story featuring me is baffling. Half the time I don’t even want to read what I’ve written once I’ve written it.

I had a great time speaking with her, and when we finished talking I pulled out a few old copies of The Rock and began looking for photos of me during this past year. Apparently I don’t take a ton of photos because I was only able to come up with about two dozen between the start of the school year and my last in-school day (which I don’t even have a picture of because I thought we’d be coming back). Aside from the featured images I’m taking for these posts, I rarely take selfies. I also have virtually no social media presence, so capturing myself constantly isn’t too high on my agenda.

Once I’d compiled significant photographic evidence that I’ve done slightly more than sit on the couch and study this year, I carried on with my day. This mostly consisted of watching a few episodes of Chilling Adventures of Sabrina and taking a short nap, which I’m sure will mess with my sleep schedule even more. When my mom asked if the Mississippi Mud Pie was ready to eat yet, I headed to the kitchen to add the finishing touch: dollops of freshly whipped cream. I poured a cup and a half of whipping cream into a metal bowl, turned on the electric mixer and a few minutes later, the dish was done. While it didn’t look exactly how I remembered it from our trips to 63 Diner, the pie turned out well. The chocolate was so rich, though, that I could only have one slice before feeling a bit chocolated-out.

“If the world is cold, make it your business to build fires.”

In the evening, I reached out to a few friends to see if they wanted to go with me to this Friday’s light event at RBHS, and two of them agreed. It’s not really my scene, but it will give the journalist some B-roll for her to use, and seeing them will be nice (even if we are in separate cars). This whole mini documentary interview experience feels unreal, and I really don’t want to somehow mess it up. I am so used to being the one conducting the interviews, I’m not quite sure how to be the interviewee. I have my fingers (and toes) crossed. I just hope it all goes well.

“If the world is cold, make it your business to build fires.” ― Horace Traubel, American essayist

How did you spend your 27th day of social distancing? Let us know in the comments below.