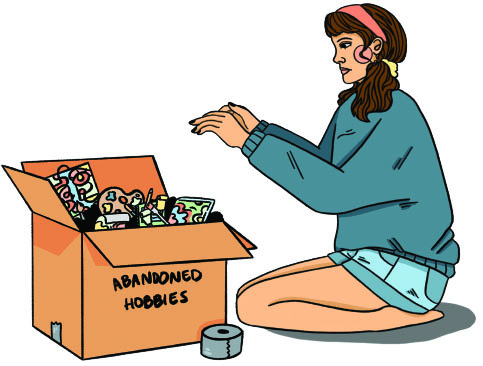 All throughout elementary school, my older sister, my mother and I made frequent trips to arts and crafts stores. We picked up Apple Barrel acrylic paints in all the possible colors and brought home creamy white canvases by the dozen.

These outings replenished the art table in our basement, now ready for my sister and me to create our next masterpieces, which, if we were lucky, our mom would hang up around the house. Our basement accumulated stacks and stacks of finished pieces, at one point my new favorite creations, but forgotten over time.

The stack stopped growing as fast and later became stagnant during middle school. I looked at my sister’s work, proudly presented on our walls, perfectly realistic and representative of the skill she accumulated from her Advanced Placement art classes. When my friends came over, my sister’s carefully penciled-in self-portraits and surrealist oil pastel pieces stared down at them. Those who hadn’t yet been to my house looked at her artwork in awe, wide-eyed and open-mouthed as soft “whoas” escaped their mouths. My other friends, used to this reaction, nodded knowingly and said, “Her sister’s really good at art.”

I wished what I created impressed people as much. I wondered why I spent so many hours and so much effort on mediocre pieces that would never evoke the same reactions. I wasn’t planning on making art my profession, after all. I hoped I would eventually match my sister’s level at some point, but a big part of me worried I never would.

Painting could no longer be on my list of hobbies. The acrylics dried up and the basement art table remained untouched. My mom frequently told me to draw like I used to instead of spending countless hours watching YouTube videos, but I told her, “I don’t like doing art anymore.”

As all teenagers have learned to expect, adults started asking me what I wanted to do when I grew up. My career choice had changed so many times—and still is changing—and having to choose a somewhat solid path scared me. Events from career day to counselor meetings hammered in my head the idea that my hobbies reflected my future career.

I remember the quizzes all middle school students took that told us what career pathway best suited us. Do you like being around people? Go into a helping profession. Do you like gardening? Go down the nature path. Basically, we translated our hobbies into our future jobs. I nearly always got the creative path because the things I really enjoyed doing involved creation, even if I had stopped following through with them. But I didn’t want to be an artist or a singer or an actor—and if the only interests I had or were good at were creative, didn’t that mean I was required to go down that path?

“The younger me would have been so disappointed to know an art class was now just a way to earn a required credit. She would have been ashamed that I shoved aside my hobbies just because they weren’t what I wanted to do professionally.”

I didn’t know it at the time, but I had rejected my artistic side to fit my expectations of the type of person I was going to be. When I found interest in topics like psychology and biology, I decided I wanted to pursue medicine in the future — and “science people” didn’t waste time taking art classes. I dropped art class twice during my freshman and sophomore years because, although I needed a fine arts credit, I had more “important” classes I wanted to take, the ones that would propel me toward my career choice and make colleges everywhere want me.

The younger me would have been so disappointed to know an art class was now just a way to earn a required credit. She would have been ashamed that I shoved aside my hobbies just because they weren’t what I wanted to do professionally.

The years where I decided I wasn’t going to be an “art person” were the years when I suppressed a huge part of myself. Too often, people portray themselves as completely boxed-in, focused individuals when they could branch out and diversify their interests. Not every hobby must be the basis of one’s personality, nor must they be monetized in order to be deemed worthy of one’s time.

Amid grueling finals and depressing, blackened snow last winter, I realized I didn’t have many hobbies. I spent my time going to school, doing homework, watching TV and hanging out with friends, but I couldn’t think of anything I did by myself purely for enjoyment, anything I was truly passionate about. The lack of pastimes among teenagers and children is a common trend; an article from the National Review by radio talk-show host Dennis Prager stated modern technology such as streaming services and social media make people feel as if life is fulfilling without actually being active by doing and creating.

The article urges parents to encourage their children to find passions rather than telling them to spend all their time on homework. “If the most important passion you cultivate in your child is getting good grades,” Prager stated, “what will your child’s most important passion be after leaving school—in other words, for the next 70 years of his or her life?”

I want to be focused on reaching my goals and doing well in school, however, being hard-working isn’t the antithesis of exploring non-academic or -career-related interests. The creative spirit that I hadn’t acknowledged in years was itching to come back. I spent one night during that winter watching oil painting videos, learning the technique and admiring the skill of the artists as they smoothly dragged their brushes, loaded with pigment, on the creamy white canvas. Although what they created was strikingly different

from what I did in elementary school, an incredible feeling of nostalgia swept over me. It felt good to learn something new again. I wanted nothing more than to pick up a brush and live out the videos in real life.

The following weekend, my mother drove me to the craft store, and I picked out a set of five tubes of Winsor & Newton oil paint that the videos told me were essential colors for beginners along with a palette knife and some linseed oil. My first work featured a Bob Ross-inspired royal purple mountain in front of a warm sunset. The colors of the sunset are poorly blended and the edges of the mountain are fuzzy, with the purple smearing and swirling with the background. I was proud of it, not because the craftsmanship was impeccable, but rather, because I finally created something artistic again.

I kept watching tutorials and filling up more canvases to continue this renewed feeling of inspiration. When I feel creative, I am both calm and energized. I can paint to take a break from homework or to challenge myself and try to improve.

Over months and months of learning techniques such as how to outline with an underpainting, how to establish shadow and light with colors other than black and white, how to make flesh look real and raw, I understand, now, the value of taking the time to grow my passions and continuing to try to better my skill.

Next year, I’m going to take my first art class. I know I’m not the best, but I’m only excited to keep learning and see my art become more experienced, complex and special. I don’t want to be a professional artist when I grow up, but I now know I can be an artist alongside anything I do in the future.

Have you ever rediscovered old hobbies? Let us know in the comments below.