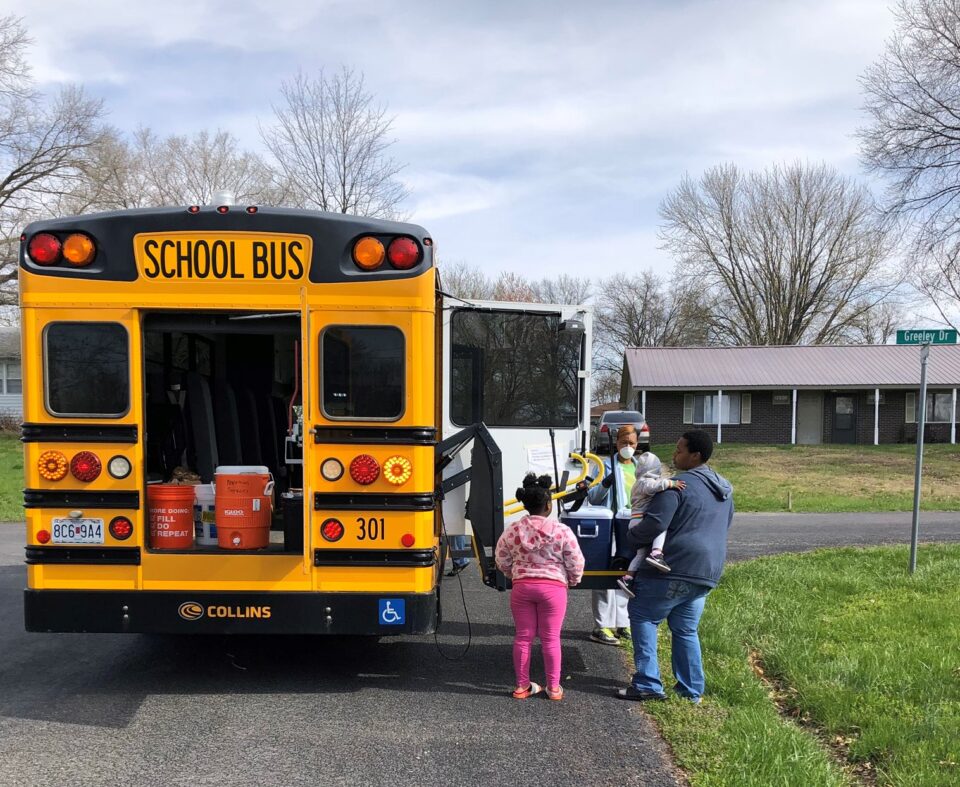 The spread of the COVID-19 disease provoked the City of Columbia to issue a stay-at-home order on March 24. This in turn extended the Columbia Public Schools (CPS) district shutdown, which started March 18, to the end of the spring semester.

As a result, students who qualify for free and reduced lunch won’t have access to cafeteria meals for the rest of the school year. The CPS Nutrition Services and Transportation Departments have combatted this issue by providing breakfast and lunch to students through the CPS Grab-and-Go Meal Service, which began March 30.

The program uses eight buses that run eight separate routes Monday through Friday, starting at 8:30 a.m. The routes are designed to include high-need areas, although CPS Nutrition Services Director Laina Fullum said she plans to adjust the locations of the stops to fit the needs of students and parents as time goes on.

Fullum and two CPS Nutrition Services employees, such as kitchen managers or cashiers, ride on the bus and wait for kids to get their meals at each of the approximately 80 stops. Students aged 2-18 or their parents may obtain a meal at any stop listed on the information page.

“As soon as Dr. Stiepleman was talking about shutting the district down, he immediately said we will need to make sure we’re getting food out to the high-need areas of the city,” Fullum said. “And so we just put the wheels in motion. We talked with [the Transportation Department]; they were on board, they were extremely helpful.”

“As soon as Dr. Stiepleman was talking about shutting the district down, he immediately said we will need to make sure we’re getting food out to the high-need areas of the city. And so we just put the wheels in motion.”

Fullum said her department works closely with the CPS Transportation Department, including director Blake Tekotte, to develop the program. The Student Transportation of America (STA) employees driving for the Grab-and-Go Meal Service are earning their usual wage while the CPS Nutrition Services employees are making extra money in addition to their normal pay, Fullum said.

“The district has made a concerted decision to pay all staff,” Fullum said. “So whether they’re going to work or not, all staff get paid their regular amount. Then anyone who’s working during this emergency effort will actually get paid extra so that there is incentive to come to work.”

Fullum said 21 to 26 of her employees out of 165 are working right now and Tekotte said eight drivers for the eight routes are currently working in addition to one driver on reserve. Tekotte, who serves as a liaison between STA and the district, said he makes sure buses are staying on time and observes the participation the delivery service is getting from each stop. He said when they regularly adjust the routes, they’ll keep them for two weeks and make adjustments moving forward. The first stop change will be April 13.

“We’ll take off or remove stops if we haven’t seen any children or parents come to grab the food, and then we’ll put in some other locations where we think we might see some more [participation],” Tekotte said. “That’s why we’re giving it two weeks, because word of mouth, people might have been out of town or that type of thing. We wanna make sure they get the chance to be able to get to the bus stop locations if they are going to go.”

In terms of logistics, Fullum said the Missouri Department of Education provided fee waivers for the meal service, so students don’t have to pay. The prime vendor for CPS, Kohl Wholesale, is supplying all the food. Because CPS Nutrition Services shifted from a cafeteria environment to a bus, they had to accommodate by switching their menu to shelf-stable items, with the exception of milk, fruit and vegetables. The staff is continuing to follow the U.S. Department of Agriculture’s menu standards.

“We’ll have celery or broccoli, carrots, those kinds of things. Things that are hearty and able to withstand travel,” Fullum said. “So we still have to follow the regulations that we normally follow. It just looks a little bit different because of the nature of what we’re doing.”

Fullum said she expects the number of meals handed out to continue to go up as time goes on: the first day had 669 participants, the second had 886 and the third day had 960. She said the stay-at-home order may cause people to lose their jobs as some companies cannot keep paying their employees like CPS. She said she also thinks the numbers will go up as more people find out about the service.

“We’re trying to tweak the routes and then get more information out there,” Fullum said. “We’re answering an abundance of questions from our community. So yeah, we are definitely making changes as we go along.”

Another meal service put in place in response to the COVID-19 pandemic is Meals for Healthcare Heroes, organized by the RBHS Interact Club, which is part of the Columbia Rotary South chapter of Rotary International, a worldwide service organization. The service is collecting money to give to local restaurants that in turn provide food for healthcare workers at the University of Missouri Hospital and Boone Hospital Center.

Shruti Gautam, President of Interact Club, first brought up the idea of Meals for Healthcare Heroes after seeing a tweet from Superintendent Dr. Peter Stiepleman about a similar program in New York City. Gautam set up a GoFundMe page March 31 to gather money and has been sharing it to community members since then. Interact Club Sponsor Eric Lorenz has been working with her and doing “most of the leg work,” Gautam said.

“We have been contacting local restaurants to see if they would want to be part of the effort … We place the order, and the restaurant provides delivery to the hospital.”

“We have been contacting local restaurants to see if they would want to be part of the effort,” Gautam said. “Mr. Lorenz made an agreement that they sign, and we will be using that as the basis of transferring funds. We place the order, and the restaurant provides delivery to the hospital.”

Lorenz said their motivation for the initiative comes from the healthcare workers, who have been working long shifts, and local restaurants, who have lost business or had to close down. Their original goal was to raise $5,000, but they exceeded $2,500 on the third day, so Lorenz said they might try for $10,000 instead. He stores the money from the GoFundMe page in a bank account dedicated to the cause, and plans to give $250 to each restaurant.

“We started at $250 per event … , not to stretch it out, because that’s not really the objective,” Lorenz said. “but to hit enough restaurants so it helps everyone a little bit because they’re struggling.”

So far, restaurants Bangkok Gardens, Beet Box, The Pasta Factory, Pizza Tree, Cafe Berlin, Flat Branch Pub & Brewing and Sagua La Grande Cuban Cafe have signed up to help with the program, although Lorenz said he is in contact with others. He said although $250 doesn’t sound like much money, it can easily feed parties of 25-30 people and give money to more restaurants.

The contract obligates the restaurants to serve only food items, and then they set up delivery with either the University of Missouri Hospital or Boone Hospital Center themselves.

Lorenz and Gautam won’t continue the project after the COVID-19 spread calms down. Once businesses are back open or if money stops flowing into the GoFundMe account, Lorenz said it’s “time to back off.”

“I would think that by May 1 [or May 15], it may be a non-issue. I’m hoping to God, that’s the case,” Lorenz said. “But if there continues to be a need, of course … even with this little bit of help we’re giving, I’d be willing to continue with it.”

If you want to donate to the Meals for Healthcare Heroes initiative, click here.

Do you think meal services are important to have during the COVID-19 pandemic? Let us know in the comments below.