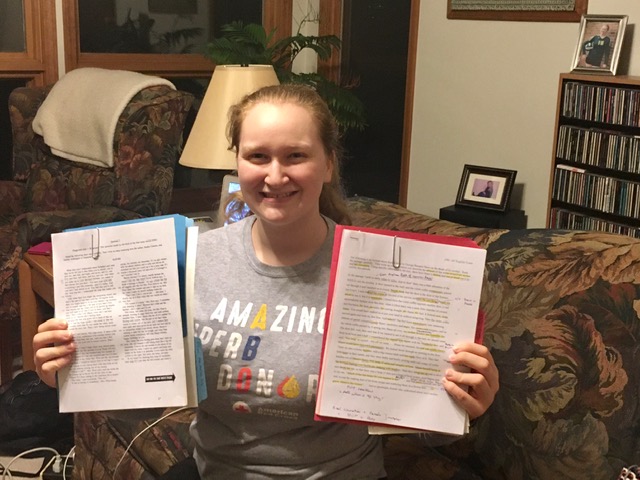 There’s no better way to wake up than by a surprise cuddle with my mom. I’d asked her to get me up at 8:30 a.m. so I’d have plenty of time to do some last-minute prep-work before my Advanced Placement (AP) Calculus AB exam today, but we both ended up sleeping in until 9:30 a.m. instead. We finally got out of bed because I only had a small blanket for both of us to share, so we were too chilly to stay asleep.

For the next hour I went through my notebook of AP Calculus material, adding Post-it Notes to the important pages. At 10:30 a.m. I joined the final Google Hangout meeting my teacher had scheduled for the year to cover some last-minute exam content and attempt to calm my nerves. Myself and several other students asked him questions, did a few practice problems and generally freaked out about the upcoming test. I had resigned myself to the knowledge that I would likely not be getting the score I need for college credit, but I still didn’t want to be completely blindsided on the test. Around 11:45 a.m. our teacher kicked us off the video call to go eat lunch and calm down before we had to log in to the test at 12:30 p.m.

While I continued to go over my notes, my mom made me a hot ham and cheese sandwich, which I ate slowly. My nerves had kicked into high gear, and I felt slightly nauseous. I was worried if I ate too much or too quickly I might throw up. Lucky for me, that didn’t happen. At 12:29 p.m. I moved from the living room to the kitchen table where I logged into the College Board exam site to begin my test. I set out my notebook and formula sheets, though I expected not to use them during the test itself because I wouldn’t have time to answer problems and flip through pages simultaneously.

When the test itself started, I went into test-mode and began working, thinking only about math. Even though I can’t talk about the specifics of the test, I think it’s fair to say I didn’t do well by anyone’s standards. I left a couple questions blank completely, which for me is virtually unheard of. I think my brain basically froze for a few minutes once the timer started because I couldn’t seem to answer even the most basic questions. The time flew by for the first problem, and when the five-minute submission reminder went off I stopped working and took photos of my work. I’d mislabeled a page, so I had to retake a photo with the correct page number. I emailed myself the pictures from my phone and downloaded them on my computer. I know other people had errors when submitting, but I was able to submit my work without issue.

The second question agreed with me a little more, and I ended up answering all but one part of the problem. I’m not sure what my odds are of getting the score I need, but I’m pretty sure they aren’t great. I hope the College Board is more lenient with grading this year because of the strange test format and the fact students have been out of school for months now, but I’m not optimistic that will be the case. Either way about it, at least I’m done with my first AP test of the season. I still have three more to take (AP Literature and Composition, AP Biology and AP Psychology), but I’m still 25% done.

After I submitted my work and the test ended, I decided to tune out the world for a few hours and give my brain a break from stress and worry. Unluckily for me, however, my cat decided to throw up twice (once upstairs and once downstairs) mere minutes after I sat down. I’m a little worried she’s sick because she keeps throwing up, but we’ve taken her to the vet and can’t seem to find a problem. Maybe a little tender, loving care will help her feel better?

I spent my afternoon talking with my mom and watching TV. That’s probably not the most productive way to spend my day, but after the emotional turmoil my exam caused, I was willing to let it slide. Tomorrow I have my AP Literature and Composition test, which I’m actually looking forward to, so I did some more prep-work with my dad after dinner.

The two writings I read were “Eleven” by Sandra Cisneros and “an excerpt from a letter by George Bernard Shaw on the death of his mother” called “She Would Have Enjoyed It.” Both of the pieces were interesting to read and relatively easy to make sense of; they also were sample prompts from previous AP Literature and Composition tests. During the actual test tomorrow I’m planning on printing off the provided text so I can annotate it. I’ve found physically marking up a text helps me notice key details, themes and connections I would have otherwise missed.

I am extremely thankful for all the help my dad has provided me with for studying and discussing texts. I am lucky to have parents with English education backgrounds, which I know my peers likely don’t. I hope I can make him proud during my test tomorrow. I don’t want to freeze up like I did today, but my guess is that because the topic is literature and not calculus I won’t have as much of an issue.

“Once more unto the breach, dear friends.”

When my dad and I finished our discussion, he, my mom and I decided we wanted to watch a show together. Our current favorites are “Chuck” and “Zoey’s Extraordinary Playlist.”  The two series are completely different, but we are enjoying them both. I am ready for these two weeks of tests to be over and done with, even if they are the last tests I will ever take as a RBHS student. Once they end, I’m planning on creating a routine for sleep, exercise, independent studying and family time so I can give my life a little regularity and be sure to prioritize all the people who matter to me most.

How did you spend your 56th day of social distancing? Let us know in the comments below.