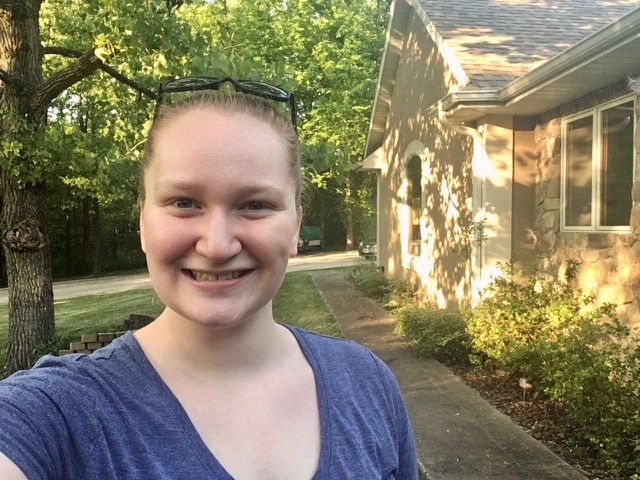 My dreams are either non-existent or utterly absurd. Last night they favored the latter. I ended up waking up a little after 11 a.m. being able to vividly recall dreaming about dressing up in brown and white clothing, being on crutches, traveling to and living in a small cabin in the woods and ultimately ending up eating a meal in a fancy restaurant where my brother literally danced away from our table in the middle of a conversation. How I’m supposed to interpret that is beyond me, but at least when I’m asleep I’m entertained.

After I got out of bed, I made myself a bowl of oatmeal with peanut butter and honey, which is becoming one of my go-to meals. I didn’t have any plans for the day except to finish my last five nice notes and then go to a friend’s graduation party in the evening. Yesterday I’d spent nearly nine hours straight writing nice notes, so today I was feeling a little kindness-deprived. I didn’t mean to not work on my final five today, but as the hours went by it just kind of happened. I still have tomorrow to write them, but I specifically set aside these five for the end because I wanted to put the full force of my energy into making them wonderful.

My family and I are planning on visiting my grandpa tomorrow because it’s usually the day when he would host his annual Memorial Day weekend fish fry, but since he can’t have his usual hord of friends and family come by, we’re going up instead. I don’t think we’re leaving home until the afternoon, however, so I should have plenty of time to write and print my nice notes. I’m not sure if I’ll be able to print double sided, but I’ll figure something out.

I spent most of my day doing nothing productive and instead binge watching the new Mexican web television series Control Z on Netflix. I was a little confused at first by some of the words because they were a slightly different dialect than I was used to from watching the Spanish drama Elite, but I adjusted. For now I have to watch the shows with English subtitles to be able to understand them, but I’m planning on rewatching both series with Spanish subtitles next to practice both my written and auditory comprehension skills in the language.

Around 7:15 p.m. I left my house and headed over to my friend’s to catch the tail end of her graduation party and watch High School Musical 3: Senior Year with her. I heard her say if she can’t have a graduation, then she’s going to graduate with Zac Efron. As per usual her party was beautiful. For the most part people stuck close to their own families and followed social distancing, but when the movie started (which played on an inflatable screen outside) they squeezed closer to watch. Before the actual film began, my friend’s parents showed a five minute video and photo montage they’d put together to celebrate their daughter. It was really sweet and made my heart happy to see her grow up and become the beautiful, confident young woman she is today.

“I always marvel at the humans’ ability to keep going. They always manage to stagger on even with tears streaming down their faces.”

Because she lives across town and I didn’t want to be driving too late at night, I left her house at 10 p.m. and made my way home. I felt nostalgic and sentimental, and I’m going to miss her like crazy when she moves away for college next year. I am so grateful for all of the memories I’ve made during my high school experience, but I’m also ready to enter this new chapter of my life and see what the world has to offer. I’m not sure what my first semester in college will look like, but I’ll do my best to make the most of it.

“I always marvel at the humans’ ability to keep going. They always manage to stagger on even with tears streaming down their faces.” ― Markus Zusak, The Book Thief

How did you spend your 67th day of social distancing? Let us know in the comments below.