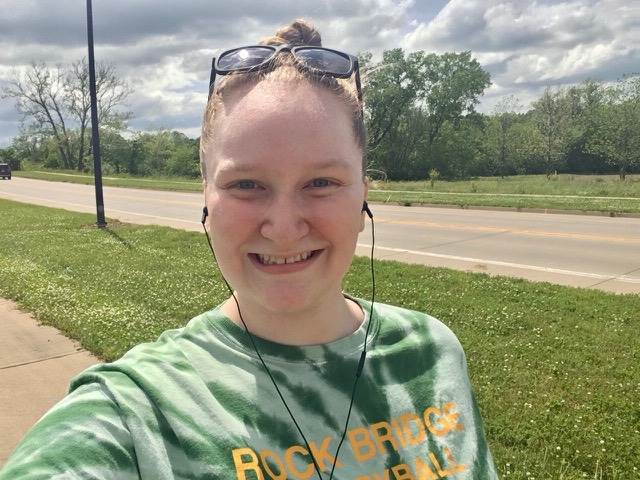 Summertime sunshine is the best. Today is May 26.

Waking up before my mom left to pass out yearbooks at RBHS, she and I chatted about my year while I ate a muffin for breakfast. I think I should feel sadder or at least more emotional about not having a proper graduation and missing out on various senior events, but for the most part I’ve been enjoying the relaxation and free time this pandemic has allowed me. I’m not sure if I’m just not taking it seriously enough, despite the fact I rarely leave the house, but I think I’ve not had as hard a time adjusting to this new normal as some of the people I know, my mother included.

Last summer I’d enjoyed listening to the first season of the series, and I hadn’t thought there would be a second, but to my happy surprise there turned out to be another seven episodes that came out in December 2019.”

When she left, I looked up apple fritter recipes. I’d been interested in baking something new today, and they sounded good. When I read a recipe for how to make them, however, I realized I’d be working with hot oil, and I didn’t want to do that for the first time without my mom around to help and guide me. I’m planning on suggesting to her we bake together later in the week, and I think she’ll agree.

Around noon, my brother asked me if I wanted to play tennis with him, my dad and Will today. I agreed and asked when I needed to be ready to go. He said in about 10 minutes, so I quickly went to my room to toss on suitable clothes to exercise. I was grabbing my shorts when my brother informed me Will had misunderstood him and would not be joining us, which in turn meant I wasn’t playing either. I’d been looking forward to getting a few touches in, but for the most part I just wanted to exercise in one form or another.

I decided on going for a walk instead so I could enjoy the sunshine and beautiful weather. As I was looking for something interesting to listen to while I was out and about, I discovered a second season to a scripted podcast adventure series from Gimlet Media, The Two Princes, was available. Last summer I’d enjoyed listening to the first season of the series, and I hadn’t thought there would be a second, but to my happy surprise there turned out to be another seven episodes that came out in December 2019. I grabbed my phone and headphones and headed out for my walk with an upbeat attitude.

About half way through my loop, I realized my legs were chafing because of the heat, which they tend to do in the summertime. By the time I got home, the insides of my thighs felt raw and looked slightly red. I think from now on I’ll need to put on some anti-chafing ointment before going on these walks to minimize my own discomfort. I’m pretty sure the chafing is an unpleasant reminder that I haven’t walked in several weeks, and I need to get back into the habit of properly and regularly exercising, which I fully intend to do.

I lounged around after my walk and ended up eating a bag of popcorn to tide me over until dinnertime, which didn’t end up being until nearly 7:30 p.m. I also FaceTimed with my grandpa, and he showed me his new hair cut. I thought it looked nice though I was a little worried because that meant he’d been around people who might not have taken proper preventative health precautions or who haven’t been following social distancing procedures. I hope he is doing well and will continue to stay healthy, happy and safe.

We decided to order out CoMo Smoke and Fire barbecue. It isn’t my favorite place to eat, but I think my dad wanted it, so that’s what we ended up with. When I finished eating I felt tired and full. I hadn’t meant to, but after lying down on the couch in our living room for a few minutes I ended up falling asleep yet again. I eventually woke up around 9:45 p.m., which I’m certain will interfere with my sleep schedule tonight. It’s strange to think I’ve not been in school for 10 weeks at this point.

Tomorrow I’m planning on renewing my driver’s license, as long as there isn’t a crowd, and writing thank you notes to the people who have written me letters regarding my graduation. I have chores for college I keep putting off, so I’ll try to tackle at least one of them. I don’t want to let my work pile up and then have a crummy summer because I don’t have any time for family and fun later on. I suppose a little work now means less later on, which I’ll just have to live with.

How did you spend your 70th day of social distancing? Let us know in the comments below.