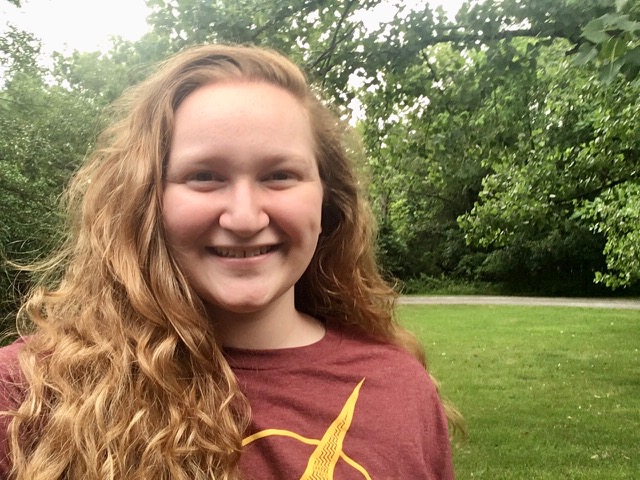 Alone time is a vital part of remaining sane when surrounded by family. Today is June 27.

Waking up to the sound of rain is such a treat. During the summertime, we tend to leave our windows and doors open so fresh air circulated throughout our house unless the weather is too hot or stormy. While the day was humid, during the periods of showers The temperature was perfect. The combination of chirping birds and water dripping off leaves onto the damp ground provided relaxing background music to my day.

I didn’t see anyone else moving around when I got out of bed, so I assumed they were either downstairs or still asleep. Because of the rain I decided to stay inside instead of going for a walk. I had almost finished my story on LGBTQ athletes last night, but I still had to make third draft edits before I could post. Additionally, I needed to construct the post with art, photos and pull quotes so it was attractive and engaging.

For some reason I have no trouble making first and second draft edits, but by the time I have to change my story during a third draft I’m sick of reading my own writing. Instead of resolving comments, I opted to track down a piece of art Rachel Stevens did to use as my featured image. Then I located the animated pride flags Snow Li made to include in the post. I also spent time constructing tool-tips to place on each flag with boxes of information relating to the LGBTQ community.  For the last InDepth of the year, I got really good at using tool-tips because I filled my posts with them. I’m going to be so sad when my skill set with WordPress becomes obsolete.

I worked for about two hours on the post adding subheads, animations, photos and more. By the end, I was proud of how everything turned out. I wish every post on Bearing News could look as good as some of the packages we’ve made, but I suppose part of the sacrifice we pay for speed is post quality. When I finished cleaning up my own post, I decided to look through the rest of the “LGBTQ Concerns Move into Mainstream” package and see if there were any changes I needed to make. This course of action took me down a rabbit hole of tweaks and small fixes. I went through old posts adding forgotten animations, rearranging pull quotes and pulling in the edges to improve readability. When at last I called it quits, I was proud of what I’d accomplished. I’m going to be so disappointed if the package doesn’t at least place in competition, but either way I’m happy with the stories and content we produced.

After stretching my limbs and talking with my mom for a while, she and I decided we were in the mood to watch Chuck. My brother was at work and my dad wasn’t doing anything, so we had the perfect opportunity to spend an afternoon in our pajamas eating popcorn and cucumbers from my mom’s garden. We ended up watching several episodes enthralled in the plot, commenting on characters, decisions and “inside baseball” references to cultural and cinematographic moments.

A little before 5 p.m. my mom called in our pizza order to Shakespeare’s Pizza so my brother could pick up the food on his way back from work. In return for his service, he requested I make kids’ margaritas: frozen limeade blended together with orange juice, Sprite and plenty of ice cubes. I’m not sure if I made the drink to his exact specifications, but he didn’t complain, so I think I did OK. We brought our food and drinks downstairs so we could watch a movie as a family while we ate.

We ended up deciding on watching the 2019 film Bad Education about the true story of a high school journalist who uncovers a massive embezzlement scheme in a Long Island school district. The movie itself was relatively enjoyable to watch, and Hugh Jackman is a talented actor, so we all enjoyed ourselves. Because journalism and filmography are both such large parts of my family’s typical conversations, Bad Education was right up our alley.

“Maturity is when you have the power to destroy someone who did you wrong but you just breathe, walk away and let life take care of them.”

Once the movie ended, we couldn’t decide on what we wanted to do next, so the four of us went our separate ways. My grandpa was at a golf tournament today, which was one of the first times he’d been out and about in the past several months. I’m sure he took precautions and stayed as safe as he could, but I still worried about him because I don’t want him to end up getting sick. I have several tasks I need to complete tomorrow, so I’m going to hit the hay early tonight to make sure I give myself plenty of time to complete my chores while also reserving daylight hours to relax and goof off.

“Maturity is when you have the power to destroy someone who did you wrong but you just breathe, walk away and let life take care of them.” ― Hugh Jackman

How did you spend your 102nd day of social distancing? Let us know in the comments below.