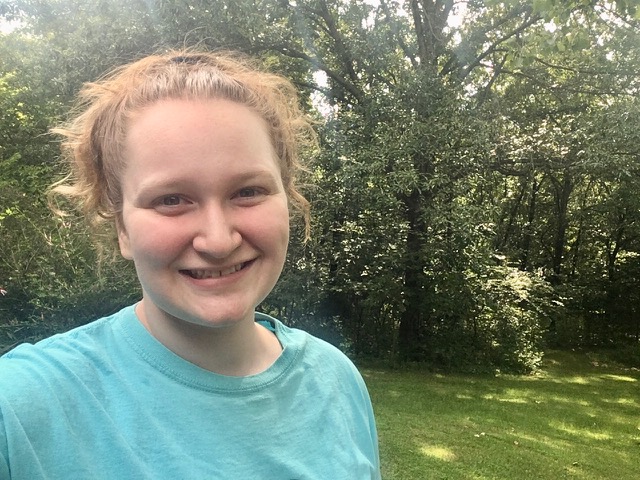 I think last night goes in the record books as one of the worst night’s sleep I’ve gotten in a long time. I stayed up for a while watching The Perks of Being a Wallflower, which is one of my favorite movies, but when I realized the movie was going to go past midnight I paused in the middle and decided to resume it in the morning. All in all, I was in bed and ready for sleep a little past midnight. Apparently reality doesn’t like to go my way, however, because I tossed and turned for another hour and a half without being able to fall asleep. Around 1:30 a.m. I finally left my room to sit outside on our deck, hoping a change of scenery might help me doze off. That plan didn’t work at all, so at about 2:30 a.m. I went back inside to stare at my wall until I at last, thankfully, drifted into unconsciousness.

It’s pretty fair to say my plan to get up early fell off the rails. I slept for eight hours before waking up and getting my day started. I had let my room fall into slight disarray, so I took the time to put away my clean laundry and clean up a bit. I’m going to miss having a space totally to myself next year, but at the same time living with another person will force me to be more organized. I’m selecting my move-in date in two days, and I haven’t even begun thinking about what I need to bring to school in the fall. I’ll need to spend some time in July making a list and compiling various necessary items, but at least I still have a month to prepare.

Once my room no longer looked like a disaster zone, I migrated to our living room to begin my busy schedule of watching Criminal Minds while postponed doing actual work. I hadn’t watched the show in a while, so returning to it felt like a nice change of pace and a familiarity at the same time. I’m on the last season that’s available on Netflix, though I believe there are three more that exist somewhere in the universe, so I’m trying to make it last as long as I can. When I started getting peckish, I was tempted to make my go-to food, oatmeal with honey and walnuts, but because breakfast time had long since passed me by I opted instead to whip up a hot ham and cheese sandwich. I offered to make my brother one, too, and he said yes.

In all honesty, I hadn’t made a hot ham and cheese sandwich in at least a year, and we were out of ham so I used turkey instead. Nevertheless, I did pretty well on my brother’s sandwich, which I made first. One side got a little too crispy, but no real harm happened. When I made my lunch, I got a little too overconfident and ended up with two almost blackened slices of bread instead of the golden color they’re supposed to have. I thought my food tasted fine, even with the burn, so I was happy.

I switched away from Criminal Minds after a bit and instead decided to watch the 2020 romance/drama I Still Believe based on the true story of musician Jeremy Camp. It wasn’t the best movie I’ve ever seen, but I did enjoy the music and ended up crying at various points in the film. If anyone is looking for a feel-good, moving piece of cinema to watch, I Still Believe would be a good pick. Faith and love are powerful motivators, and for anyone who can sincerely find either (much less both) in this world, I am impressed.

About the same time I finished the movie, my brother and dad got home from playing tennis. I had to set up a Facebook account to join the Walter Williams Scholars group, a program I’m involved in at the University of Missouri ― Columbia. I’d put off doing this for several months, so when my brother offered to help me create an account, I readily agreed. He showed me how to change the various privacy settings, find friends and understand the basics of Facebook. My brother was in the mood to be helpful, so he also decided now was the time for me to get a Twitter account. While he was using my account to follow various people, I took the time to update my Instagram biography with my college.

I now have three social media accounts, and this time last year I didn’t even have one. I’m sure in the future I’ll be happy to have them, but at the moment I don’t have much of an interest in being on social media. I have plenty of distractions as it is. I don’t need other people’s posts, status updates and random opinions cluttering up my mind, too. I realize that may sound self-centered or rude, which is not my intention at all. I simply mean to say when school starts and I go back into my ultra-focused cocoon of studying, extracurriculars and grades, I don’t want to have to pay attention to social media if I’m already stretching myself thin with academics. I’m not sure if that will be the case in college, but speaking from my high school experience I needed all the time I could get.

“Guard your time fiercely. Be generous with it, but be intentional about it.”

Tomorrow is my last day to submit a financial aid application for the Chancellor’s Leadership Class, which I’m hoping to get into. I have filled out part of the information, but I still need to ask my parents for help with the second portion. I also need to read the assigned book for the Honors College tomorrow and take notes, but I’m looking forward to having an excuse to read. I hope I have better luck falling asleep tonight, but if not I may just give in and stay up reading to pass the time.

“Guard your time fiercely. Be generous with it, but be intentional about it.” ― David Duchemin

How did you spend your 104th day of social distancing? Let us know in the comments below.