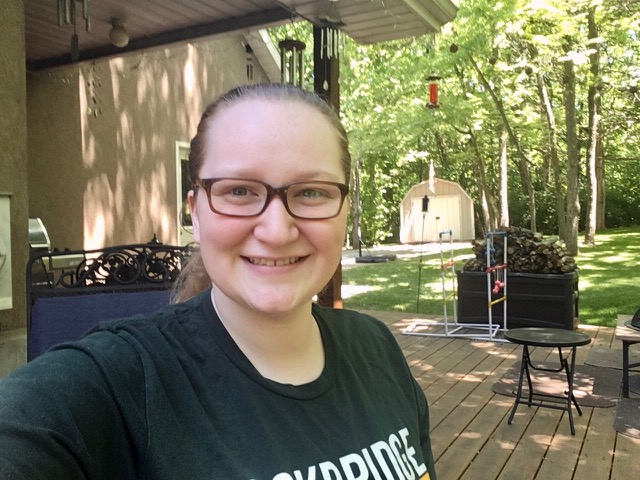 How long can a nap last for it to still count as a nap? Today is June 13.

As I’d intended last night, I slept in until about a quarter after 10 this morning. When I got up, my whole family seemed to be awake and active, which I hadn’t expected. My mom told me she’d been up since 5 a.m. for some reason, and even my brother was moving around before me. Still half asleep, I made my way to the kitchen when I heard my mom and grandpa talking on the porch. I hadn’t known he was coming over, but I was able to give him some of my cookies as a treat. He ended up leaving us an entire roast as well as several pieces of exercise equipment. I’ll have to try them at some point to figure out how they all work.

By being a TRYPS kid I’ve made friends, learned organizational and time management skills and gained an appreciation for the arts. I hope to enable younger generations to connect with theater the same way I have.”

My brother was watching the virtual Missouri State Democratic Convention, and even though I wasn’t paying too much attention I heard one of the speakers who I think was a reverend say, “Let us agree to disagree without being disagreeable.” I liked the sentiment a lot and think the world would be a much better and kinder place if more people behaved that way. When he wasn’t watching the livestream, my brother went through the University of Missouri ― Columbia (MU) courses available during the open slot I have in my schedule. I found a few I’m interested in including black studies, British literature, a cross-cultural journalism class and two sociology courses, once centered around gender and the other around health. Tomorrow I’m planning on reading the full course descriptions and, hopefully, making my final selection so my schedule for the fall is finalized.

As I was checking my email later in the day, I noticed Theaters Reaching Young People and Schools (TRYPS) had contacted me. From about third through eighth grade I did plays with TRYPS. I’ve also helped out with the organization’s bi-annual tea parties, dressed up for charity runs and been a shadow teacher for its summer camps. Because I’ll be attending MU for college, I’ll be in town and can continue to help out in whatever capacity I’m able to. By being a TRYPS kid I’ve made friends, learned organizational and time management skills and gained an appreciation for the arts. I hope to enable younger generations to connect with theater the same way I have.

I didn’t have any specific plans for the day, but after the stress of the past two days I wanted to have time to myself and relax. In the afternoon, my parents decided to go for a bike ride. They invited me to join them, but I declined. Instead, I opted to rewatch an episode of Sherlock. Almost as soon as the episode ended, however, I fell asleep. I hadn’t intended to take a nap, but I’m not sure if sleeping for three and a half hours even technically counts as a nap. I slept through dinner and didn’t wake up until about 7 p.m. My body must have needed the rest, so I’m not complaining.

When I woke up, I decided to shave and take a shower, which I’d planned to do much earlier in the day. The water helped me clear my head and relax me. Once I got out, my parents suggested the three of us watch a few episodes of Chuck. I am absolutely in love with the show and all (save a few) of its characters. I don’t feel guilty about having an unproductive day today, but I do want to get back into the flow of productivity tomorrow.

“The unfed mind devours itself.”

I might go for a walk depending on whether or not the temperature is too hot, and I’m planning on starting a new book sometime in the near future. I also know I should spend some time making a list of items I will need for college and have a to do list of miscellaneous items about as tall as I am (though that could be a bit of an exaggeration). I’m certain my future self will thank me if I bit the proverbial bullet and do the hard work now so later in the summer I’m not stressed and overwhelmed by all the tasks I put off.

How did you spend your 88th day of social distancing? Let us know in the comments below.