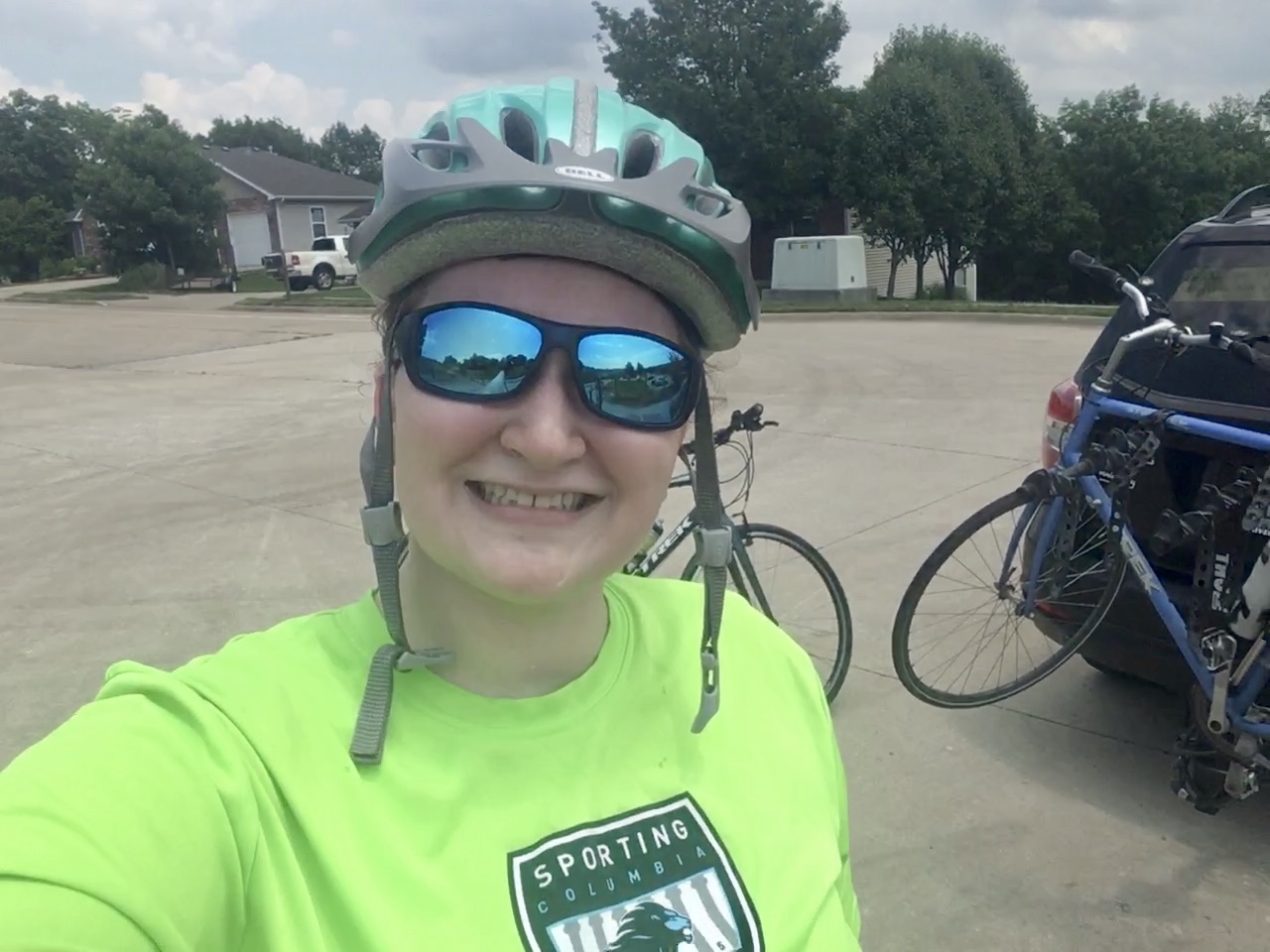 As I predicted, I didn’t get up until about 9:30 this morning. When I left my room, I noticed my grandpa was at our house. He hadn’t come by yesterday to have my mom change his bandages because of my dad’s birthday, so he came down for her to freshen him up. He, my parents and I sat on our back porch for a little while talking. I still felt partially asleep, so I don’t think I contributed much to the conversation. My parents brought up the idea of going on a bike ride, so when my mom was changing my grandpa’s bandages I went back to my room to change into workout clothes.

I had no set plans for the day, so a bike ride sounded fun. I made myself some oatmeal for breakfast and hydrated so I felt good for the ride. When my parents told me we’d be leaving in about 20 minutes, I put on my shoes, applied sunscreen and filled up my water. My parents had ridden the trail we went on, Hominy Creek Trail, a few times before, but this was my first time. Most of the trails in Columbia are familiar to me, so I was excited to have a new adventure.

We started out the ride with lots of downhill coasting (which was nice) before hitting a few stretches of flat concrete. The beginning was relatively easy, as was most of the ride, but there were a few sections of steep hills and tight turns. The hardest hill was one we reached about half way through. My parents had given me a heads up, however, so I was able to gear down significantly before reaching it. When we reached the top, we took a water break at an overlook area.

The weather was perfect for being outside, and none of us were feeling too tired, so instead of turning around and heading back for an out-and-back path, we decided to go on ahead. The best part of going up a really steep hill is being able to coast down from the crest. Unfortunately, my dad and I got caught at a red light at an intersection, so we had to cut our coast short. From there we got off the road and went onto another section of the trail. Nature was all around us, and we even saw a dear near the trail, which is a rare sight.

Except for about five minutes of light rain, we had overcast skies and only medium humidity. My parents knew where we were going, somewhat, but at one point my dad had to use a maps app on my phone to make sure we could do a loop instead of turning around. The whole experience was an adventure, and I was glad I agreed to go. The way back was easy enough, but for the last 30 seconds of the ride I had to gear down to go up a steep and sudden incline to reach our car. By the end of the ride (which all in all lasted about an hour and 20 minutes) I was tired in a good way and happy.

We cooled off in the car on the way home, and when I got back to our house I drank water to rehydrate. My dad had taken down our hammock because of the rain before we left, so I relaxed inside instead of stretching out outside. For most of my afternoon I ended up endlessly browsing Netflix and Hulu before deciding to watch old episodes of The 100. Today was one of those days where nothing looked interesting to watch, which was disappointing because I was bored.

Before dinner I emailed a professor at University of Missouri ― Columbia. He’d heard from his daughter I’d be attending the school in the fall, and he wanted to see if I was interested in joining a research team of his as a writer. While I’m not skilled (or really even understand) biological and chemical engineering, which I believe is this professor’s area of study, I can write a logical sentence. I asked for more information about what the work would entail, and I’m excited to hear back soon. I might even be able to start this summer.

“The true secret of happiness lies in taking a genuine interest in all the details of daily life.”

After my family and I finished eating, my brother suggested we watch TV together. I was feeling sleepy, though, so I said he and my parents should find a show to enjoy while I went my own way and got ready to go to bed early. I loved having the whole day to enjoy when I got up at 7:15 a.m., so I’m going to see if getting to sleep before midnight will allow me to not sleep in so late. I have a guess my hypothesis will be correct, but I’ll just have to wait and see.

“The true secret of happiness lies in taking a genuine interest in all the details of daily life.” ― William Morris

How did you spend your 94th day of social distancing? Let us know in the comments below.