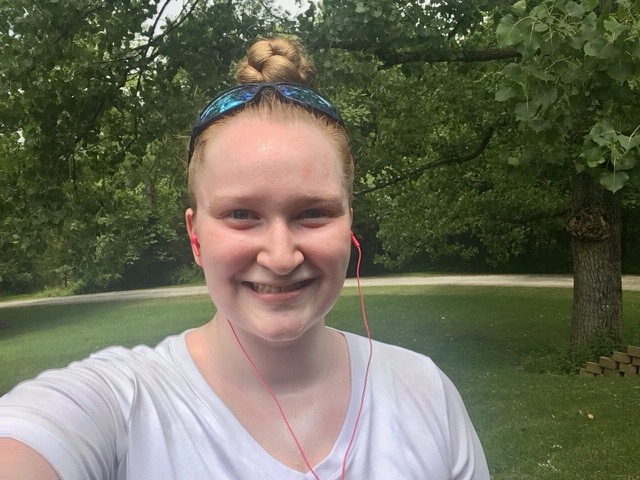 On the longest day of the year, exercise first thing after waking up seemed to be the smart thing to do. I didn’t want to let my day slip by without going for a walk. About half an hour after I got out of bed, I was out the door and on my way. Even though I didn’t want to, I made sure to apply ample sunscreen to prevent sunburns. I also decided I’d try a new addition to my workout: weights. I bought a set of hand weights, which I think only weighed between three and six pounds, to use while I walked. Because I was using an arm band to carry my phone and listen to music, I had my hands free.

hadn’t realized how much I’d missed being with (or at least in the same room as) my friends. I hope they are all doing well and staying safe and happy.”

I ended up walking for just shy of 90 minutes. For the most part the weather was beautiful, except for when there was no shade and the sun was beating down on me. I hadn’t realized how sweaty I was until I got home and my dad made a comment. My shirt was soaked, and I was dehydrated, so I sat inside drinking water to cool off and rehydrate.

I hadn’t eaten anything at that point, so I made myself a bowl of cereal and stretched my limbs. I entertained myself with old episodes of The 100 and lounged around. The rain was beautiful when it came, raging against the flours and trees outside my window. My parents got caught in the storm, but I remained dry inside, laughing as they hurried out of the brief storm.

After a while, I decided to take a shower and clean myself off. I ended up nicking myself while shaving, which wasn’t pleasant, but in the end it felt nice to be clean and refreshed. Because I’ve been growing my hair out since the start of my quarantine and social distancing, washing it now feels as if it takes forever.

While I waited for my hair to dry, I wrote a letter to a close friend of mine, Corinne Farid. She was having her graduation party today, and within a week she is leaving for the United States Naval Academy. We became friends sophomore year, and since then she’s become an important part of my life. I have so much respect and admiration for her. She is going to change the world someday, and I’m glad I’ve had the privilege of knowing her.

The graduation party was nice, and I was glad to have gone. Only one other person aside from myself and my mom was wearing a mask. I hadn’t expected everyone to have worn one (I know that’s unrealistic to think it would happen even today) but I thought there would be more than three people following health guidelines and protocols. I did break my social distancing rules, though, and gave Corinne a hug when I saw her and before I left. I saw a few of my friends and my math teacher, which was fun. I hadn’t realized how much I’d missed being with (or at least in the same room as) my friends. I hope they are all doing well and staying safe and happy.

“The greatest wealth is to live content with little.”

My mom and I didn’t stay long, but I was glad I got to say goodbye. When we returned home, my mom made dinner so our family could eat together when my brother and dad got home from playing tennis. The meal was lovely, and when we finished we watched the last two episodes of the first season of Carnival Row together. Tomorrow is Father’s Day, so the four of us are going to enjoy a nice breakfast and (probably) go biking together. I hope we can also play Spades together since we haven’t in a while. Regardless of what we do, I hope we can have a good day.

“The greatest wealth is to live content with little.” — Plato

How did you spend your 95th day of social distancing? Let us know in the comments below.