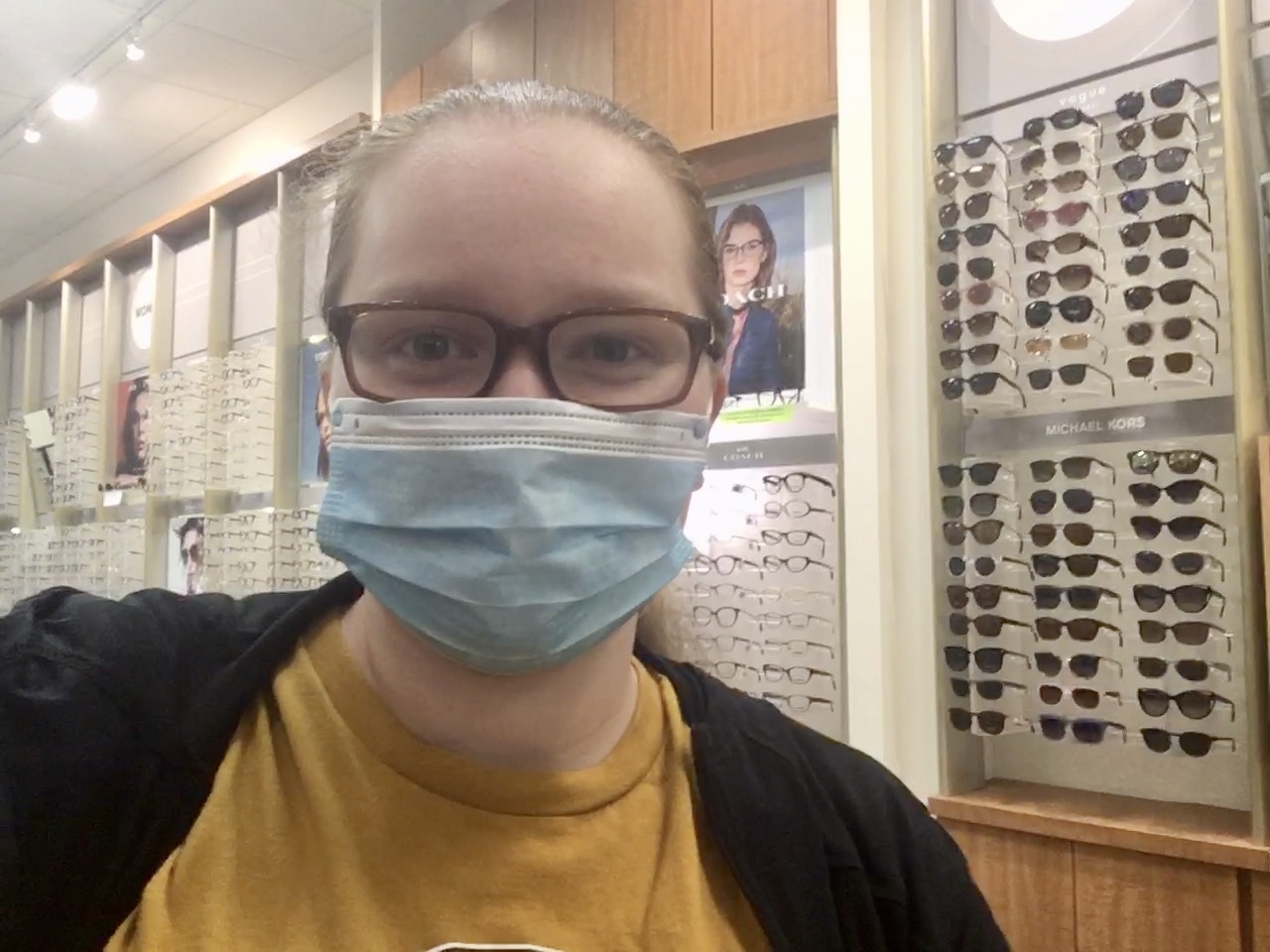 It’s the Fourth of July. Today is July 4.

I had a hard time falling asleep last night and woke up feeling unrested. I tried playing music to put myself in a good mood, but I couldn’t shake myself into a completely happy mindset. I had an appointment at Pearle Vision for an eye exam, so I focused instead on finding my driver’s license and glasses so I’d be ready to go. I washed my face, brushed my teeth and by the time I had to head out the door was feeling a little more like myself.

The drive to my appointment was relatively uneventful, but I did get stuck behind a line of slow trucks for a bit, which made me worried I’d be late. In the end, though, everything worked out just fine. Wearing my mask and glasses at the same time caused my glasses to keep fogging up, but during the exam itself I had to remove both items anyway. The equipment would fog up if I had my mask on, and because I knew I hadn’t been anywhere recently and the doctor was wearing a mask himself, I felt safe enough.

My prescription changed a little, but I still had so many contacts leftover I decided not to get new ones for a while. I was in and out in about half an hour, and including drive time the whole errand only lasted an hour. Knowing cases for COVID-19 are on the rise, and with the mall being such a public place, I was surprised by how few people I saw wearing masks. As annoying as they can be at times, I can’t imagine wanting to put my temporary comfort over the health and safety of another human being. History will be the judge of character, I suppose, and I hope to be on the right side when future generations look back and talk about this pandemic.

History will be the judge of character, I suppose, and I hope to be on the right side when future generations look back and talk about this pandemic.”

In the afternoon, I decided to continue my binge watching streak with Quantico and start the second season. I know I had some complaints about the show not addressing difficult conversations, so I was happy to see the issues of religion and sexuality come into play during the CIA storyline. One role of media and television is entertainment, yes, but another one should be pushing boundaries and demanding more representation and honest discussions on screen. Art mimics life, but life also mimics art. If society sees diversity, communication and hard-to-face issues on the screen, then perhaps the questions the media poses to the world will help generate equity and acceptance.

A little before 8 p.m. I headed up to my grandpa’s house. I have mixed feelings about celebrating the Fourth of July this year, but I know how important family time and shared experiences are to my grandpa, so I didn’t want to disappoint. We joked around and laughed, talking about the proper way to eat corn on the cob and sharing memories from past Fourth of July celebrations. The moon was beautiful as it broke over the horizon; it made me think of Halloween. Throughout the night it was even bright enough to cast shadows across the ground.

There’s a first time for everything, and I’ll try just about anything once. Tonight was the night I shot a gun for the first time. I strongly believe if a person owns a firearm, he or she must understand gun safety. The gun I used was my grandfather’s shotgun. I’ve watched my fair share of television shows and movies where guns seem commonplace, but I don’t recall ever having held one (especially not a loaded one) in real life. It was heavy and awkward. I put it tight against my shoulder because my grandpa told me it would have a kick.

“There was a crack and a push back into my shoulder. I was both exhilarated and terrified. My shoulder ached for a few minutes, but then everything was fine again. That was a crazy experience, but I’m glad I did it.”

When I pulled the trigger, aiming out into the air where there was nothing to hit and no one who could potentially be hurt, the sound and feeling was intense. There was a crack and a push back into my shoulder. I was both exhilarated and terrified. My shoulder ached for a few minutes, but then everything was fine again. That was a crazy experience, but I’m glad I did it. I’m pretty sure I’ll never forget how my grandpa taught me how to shoot a shotgun on the Fourth of July.

After we all ate slices of my mom’s berry trifle, the five of us went down to a clear patch of land near my grandpa’s house to shoot off fireworks. We were able to see some neighboring places’ fireworks over the treeline, too, so we watched them for a while before using our own. I was the only one who could get the lighter to work, so my brother put me in charge of lighting the fuses. We made sure to shoot them over my grandpa’s field and stand far enough away to be safe. We also had some paper lanterns my brother and I lit then released into the air. They moved quickly and were out of sight in about two minutes. I think my mom’s favorite part was playing with the sparklers they’d bought. For the two I used, my grandpa raced me around in his golf cart while I waved my arms drawing circles with the light.

“Without passion, everything just seems ordinary.”

The whole experience was so much fun, and I’m glad I had the chance to share it with my family, especially my grandpa. I love him so much. Every memory I have currently, and all the ones I’ll make in the future, are precious to me. When we finished shooting off the fireworks, my brother and I headed home in one car while my mom and dad left in another. On the drive home my brother and I talked about college and life. By the time we got home I was tired and ready for bed. I’m glad to have celebrated with my famliy, and I hope everyone had a safe and happy night tonight.

How did you spend your 109th day of social distancing? Let us know in the comments below.