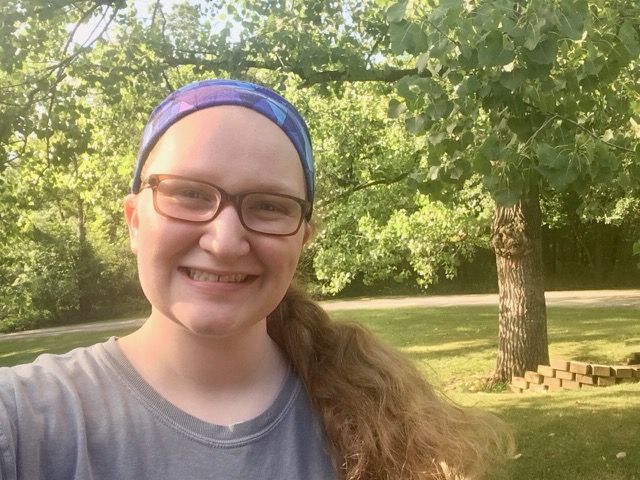 Rainy days and Mondays and all that jazz. Today is July 20.

I am so glad to be back on a normalized sleep schedule. When I wasn’t falling asleep until late and then waking up at noon, I felt like my life was slipping away from me and all my days went to waste. Now that I’m going to sleep at a reasonable hour and getting up early, my life seems more productive and my days longer. On a gray, stormy day like today, though, each hour didn’t look much different than the last. Until the storm clouds finally broke late in the day, I couldn’t seem to tell the difference between 9 a.m. and 2 p.m.

They had a certain weight to them that didn’t come from loud beats or electronic modifications but rather from the sound of a change between notes and a certain timber of the singers’ voices.”

When I first woke, I was quiet and tried not to make too much noise so as to not wake the rest of my family. I’d gone to bed before them, so I assumed they’d sleep later than I had. The wind was blowing the trees and leaves around outside, but the temperature was lovely. The rain hadn’t started just yet, so I sat in our living room watching the storm gather while listening to music and reading.

As I was going to bed last night, I discovered a few new songs I’m enjoying. My two favorites at the moment are “Sell the Furniture” by Dan Mills and “When Spring Is Coming” by Ever Yearning and Michael Stenmark. The feel and melodies of both songs seemed to fit my mood today perfectly. They had a certain weight to them that didn’t come from loud beats or electronic modifications but rather from the sound of a change between notes and a certain timber of the singers’ voices. I was more than content to sit on the couch listening to music as the storm whipped around the house.

Once my mind was awake, I checked my email and saw Dr. Noel Aloysius, an assistant professor at the University of Missouri ― Columbia, had reached out to me. Apparently I’m going to receive pay for my work, which is nice, and he was asking if I had any questions. I sent him the links to several templates I thought (with my mother’s recommendation) would work for his project. I also asked for some clarification about the specifics of my job, but regardless of what exactly it entails I’m excited to begin this new adventure. As sad as it is to say, I’ve never had a real job in my life. I’ve been lucky enough to not have to work, but I want to have this experience as I enter into the next stage of my life.

“As sad as it is to say, I’ve never had a real job in my life. I’ve been lucky enough to not have to work, but I want to have this experience as I enter into the next stage of my life.”

I’d originally planned on writing my essay for a scholarship today, but as the day wore on I felt less and less inclined to do the work. I know that’s lazy of me, especially because each daily post I write is the same length my essay needs to be. I have between 500 and 1,000 words to express myself on one of eight prompts, but I struggled to find a prompt that spoke to me. I also realized I need a copy of my high school transcript, which I’m not sure I know how to procedure. I’m going to call the school tomorrow to see if anyone working knows what I should do, but if I don’t have my transcript I can’t apply for the scholarship, which would be unfortunate.

For much of the day when I wasn’t reading and listening to music, I was watching the new Netflix drama Cursed about Nimue in King Arthur’s legendary, mythical world. I’m about halfway through the first season, but I’m not incredibly impressed so far. Compared to other shows I’ve watched about this world, namely Merlin, this series is coming up short. I like the idea behind it, though, so I’m hoping the show improves. My main takeaway from what I’ve seen is, once again, about the evils of wars founded on corrupt ideology and religion. The amount of hatred a human being possesses and can display given justification and an opportunity (both in fiction and the real world) is horrifying.

“Fear tricks us into living a boring life.”

In the evening, we ordered takeout from George’s Pizza and Steak. While we were eating, my parents and I watched several episodes of Chuck. I’m going to be sad when we finish the series; I think we only have a season and a half left. My guess is we’ll try to be done with the show by the time I go off to college, but if we don’t end then we’ll watch together whenever I’m home on break. I’m a little worried about the number of people who will be at my high school graduation ceremony on July 31 and the probability of catching COVID-19, but I can only hope people socially distance themselves and wear masks. If I’m feeling up to it, I might make another batch of apple fritters tomorrow because I had my dad pick up more apples at the store, but I might also have another lazy day and read instead. Or maybe I’ll do both because it is summer after all, and I’d better make what little time I have left count.

“Fear tricks us into living a boring life.” ― Donald Miller

How did you spend your 125th day of social distancing? Let us know in the comments below.