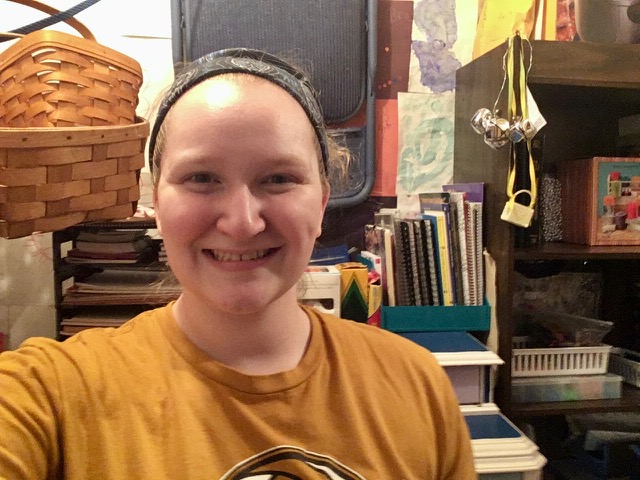 I was so energized from my graduation and family dinner last night I wasn’t able to get to sleep until 1 a.m. Nevertheless, my body decided I had to be up at 8:45 a.m., so that’s when my day started. I wasn’t the first person awake, but I still tried not to make too much noise. I went to the living room and began working on writing my final two letters to friends. I’d gotten the other 10 done ahead of time, which I was proud of, but I saved a few for the last day because procrastination seems to be an uncorrectable part of my nature. I finished the first letter and got through the first third of the second by the time my mom got up.

Once she was out of bed and ready to start the day, I made a bowl of cereal and talked with her for a bit about what I wanted to get done today. Originally we’d planned on doing all of the preparation work for my graduation party today, but because of the uncertain weather tomorrow we didn’t want to put up any decorations too soon. I didn’t have much I could do aside from pulling out the awards I want to display and getting a box for cards. My mom made sure we had enough food, though I’d guess we probably have too much now. Once all that was finished, I headed back to my room to do a little cleaning.

That’s where my plan for the day went completely off the rails. Instead of tidying up for a half, I spent nine and a half hours cleaning today. I started in my room where I pulled out old papers from my desk and sorted them into what I wanted to keep, what we should scrapbook and what I needed to recycle. I realized I had a lot of papers from classes I’d taken, so I separated those out into piles based on subject, which took up a large portion of my bedroom floor.

After that my mom realized I’d been keeping all of the college mail I’d gotten from various universities, and she told me I needed to get rid of it. I don’t know why I’d hung onto it for so long, especially since most of it was unopened. I kept a few items as mementos of my college search journey, but the vast majority I recycled. I didn’t want to guess at how much schools pay each year to mail out stickers and cards and general advertisements for their institutions just for those same letters to end up in the recycling bin. It seems like such a waste, but I don’t know all the intricacies of promoting a university.

When we’d finished removing the excess papers from my room, I asked my mom if we needed to get back to graduation party work. She said there wasn’t a lot we could do today, so we’d have to get up early tomorrow to prepare for the celebration. With that answer, I suggested we clean the crafts room. For the last several years, it has become the room where I would put my backpacks and school supplies at the end of the year, store old newspapers and house miscellaneous items for no reason at all. I wish I’d taken a “before” photo of the space for comparison, but as one can gather from the mountains of paper covering our entire downstairs living room, it was a disaster zone. We couldn’t take more than a few steps into the room without encountering a barrier.

My dad had given me until the end of summer to take care of the mess, and because I was already in cleaning mode I decided now was as good a time as any to start. My parents both doubted I’d be able to start and finish the cleaning process in one day, so I was determined to prove them wrong. Except for two short breaks, my mom and I worked for eight and a half hours straight cleaning. There was so much dust I kept sneezing and wished I’d taken some allergy medication ahead of time.

In addition to sorting through art supplies, old craft kits, beads, strips of fabric, old copies of The Rock and boxes of shells and rocks, I also pulled out three old backpacks and a bag full of papers, notebooks and binders. For hours I would take out a pile of papers or a box of art supplies, sort through it making the same piles I’d made up in my room, then move on to the next stack. At one point there was only one walkable path in our living room because of the piles we’d made.

I took many trips up and downstairs with my arms full of recycling, binders and bags. As exhausting as sorting through everything was, it also provided the perfect trip down memory lane. I officially graduated high school yesterday, and tomorrow is my graduation party, so it makes sense that the day between the two events would be when I see who I was and what I did during the stages of my academic life. Apparently my ability to spell has always been awful, so thank goodness I learned how to type using autocorrect. I made a pile of all my old Spanish work dating back to sixth grade, and it reached half way up my shin. I had more half-finished composition notebooks than I could count. I even found a few not terrible drawings I’d done over the years.

When at long last my mom and I called it quits for the day, the crafts room looked amazing. I was incredibly proud of what I’d accomplished today. My mom and I realized when we stopped working, though, that we hadn’t had anything to eat all day. It was almost 8 p.m. already, and I still had letters to write, so we ended up ordering Las Margaritas for dinner. My parents and I watched Chuck while we ate, which was the perfect way to let my brain take a break and destress.

“Be both soft and wild. Just like the moon. Or the storm. Or the sea.”

As much as I would have liked to keep watching Chuck all evening, after we finished eating I headed upstairs to finish my last letter to a friend. I poured my heart and soul into what I was saying, and I ended up writing more than I’d intended to. My lengthy letter meant I didn’t have the time or energy to write the final two I need for my teachers, so I’ll have to finish those first thing in the morning. I’m not feeling optimistic about tomorrow’s weather, so I’m not sure how many people who originally said they were coming will still make the trip. No matter what, I am grateful for all the support my family has given me, and for even being able to have a graduation party in the first place. I have to be up bright and early and have a long, busy day ahead of me tomorrow, so I’m going to do my best to get a solid night’s sleep so I can be on my A game.

“Be both soft and wild. Just like the moon. Or the storm. Or the sea.” ― Victoria Erickson

How did you spend your 137th day of social distancing? Let us know in the comments below.