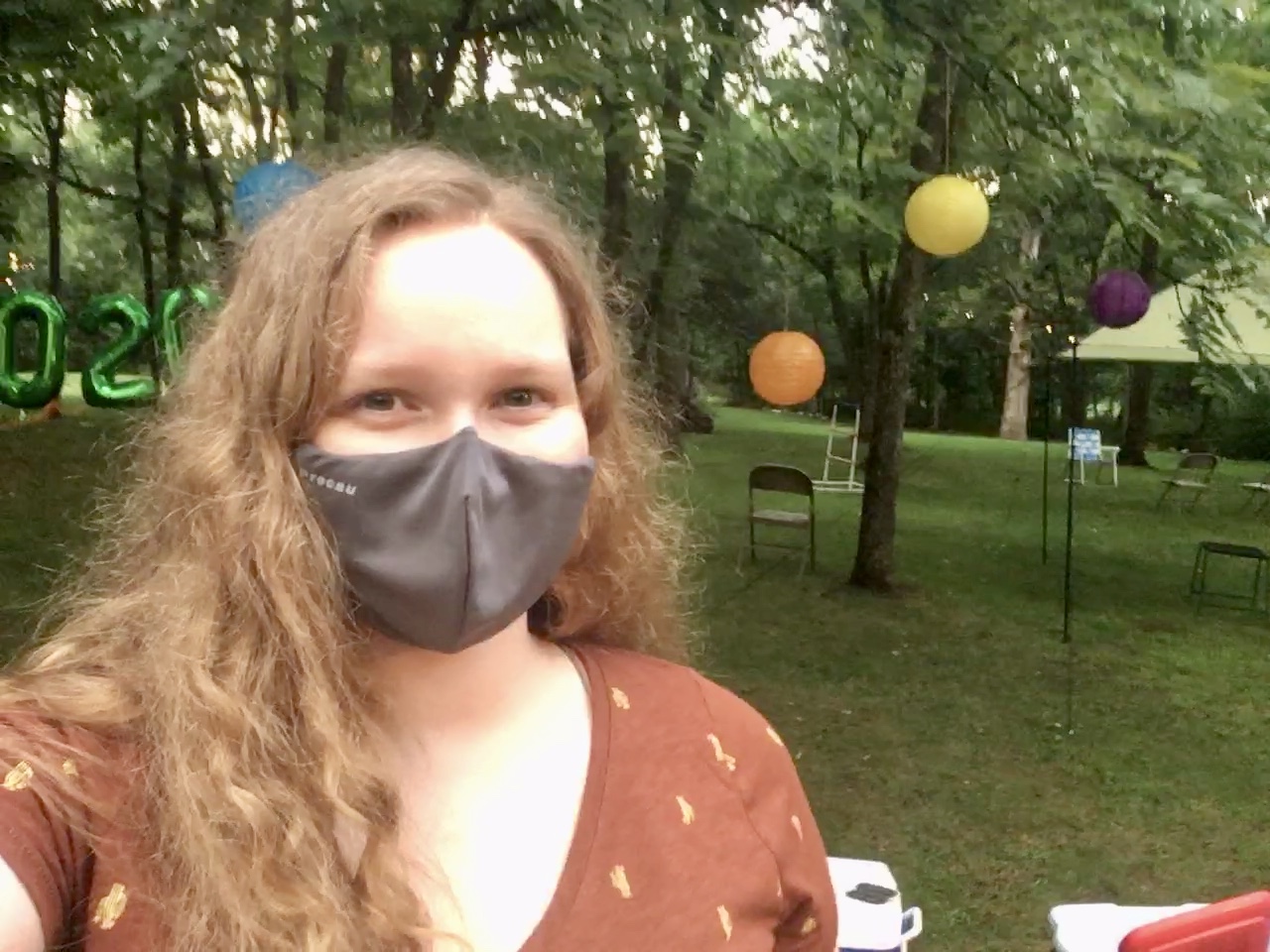 I had a fitful night’s sleep for some reason and woke up fully awake at 4:50 a.m. My friend later told me she was awake at the exact same time, too, so I’m not sure why that was such a special moment to not be sleeping. I fell back asleep pretty quickly after that, but I woke up again before my alarms at 7:50 a.m. and decided to start my day. I was the first person awake in my family, so I did my best to be quiet as I worked on my last couple letters in the living room.

In retrospect, waking up early was the smartest decision I could have made because of how chaotic life became later in the day. When I finished typing all my letters, I headed downstairs to print them off and fold them. I had some nice purple envelopes I used, so the whole process went smoothly. Initially I’d intended to print off and include photos with each letter, but I ended up not having the time.

“During both party shifts, I was incredibly proud to see everyone wearing masks and staying socially distanced for the most part. I’d been worried some people might not follow our rule, but that wasn’t a problem at all.”

When my parents woke up, they began setting up for my graduation party. The forecast had a 100% chance of rain at 2 p.m., which was right in the middle of the event, so I kept hoping and praying and begging the sky for it not to rain until the party was done. From 1-3 p.m. my friends and teachers were coming over, and from 3-5 p.m. my family and family friends were driving in to visit. As long as the rain could hold off until after 5 p.m., everything would be fine. My parents and I set up canopy tents to act as covers from the rain, arranged socially distanced chairs and prepared party decorations.

We hadn’t picked up all the food we needed for the party yet, so at some points my parents had to drive to the store for the last few items we required. While they were gone my former Spanish 4 and Advanced Placement Spanish teacher who is now retired, Eva Vazquez, called me to let me know she wouldn’t be able to make my party today because of her allergies. We talked on the phone while I was picking up our living room to make it presentable. She suggested grabbing lunch together later this week to catch up, so on Friday at 11 a.m. we’re supposed to meet up at Uprise Bakery. I haven’t been practicing Spanish as much as I should, but for the next two weeks I plan to review tenses, verb conjugations and vocabulary so I’m not in terrible shape to start college. I’m looking forward to our lunch and hope nothing happens between now and then to prevent it. Aside from that one meeting, for the next two weeks before I leave for school I’m planning on isolating myself as much as possible so I’m as safe as I can be to move into my dorm.

After Vazquez and I hung up, I took a shower and shaved. As I was drying off I scrubbed down my bathroom because it would be the one publicly available during my graduation party and I wanted it to be as sanitary as I could make it. When I finished that task, I moved to the kitchen and began putting together paper lantern decorations. They were so cute, and I was glad my mom picked them out. Once that chore was done, I moved on to inflating four green 2020 balloons to hang in our yard. I didn’t expect them to be easy, but I spent at least 30 minutes blowing them up, which gave me a nice arm and shoulder workout using our hand-held pump.

At exactly 5:03 p.m. the sky opened up and began pouring rain for the next hour. Even with the semi-frantic scramble for cover, all that really mattered was that the showers had held off until after 5 p.m.”

At 12:45 p.m. I raced back to my room to change clothes. I’d initially wanted to wear heels but opted for sandals instead. I tossed on the first semi-formal outfit I found and then got back to work. I was in the process of putting a few of my awards, yearbooks and bound books on display when our first guest arrived. That’s when the chaos really kicked into full gear. While she was talking my cousin called asking about the weather, and I got texts from several friends asking the same question. The rain was holding, so my party was still a go. I set out a box for cards when my friend arrived and started chatting. I felt bad for brushing her off and being distracted, but I was in mini panic mode because people were showing up and I wasn’t ready.

As more guests started showing I moved into hostess mode, shifting from group to group to talk, share a story and laugh. So many of my friends and teachers showed up, and it was amazing. I hadn’t expected such a large turnout. I was able to hand out most of my cards to friends, though a few people were no-shows, which was a little disappointing. During both party shifts, I was incredibly proud to see everyone wearing masks and staying socially distanced for the most part. I’d been worried some people might not follow our rule, but that wasn’t a problem at all.

People drifted in and out for the first two hours of the party. I know we’re probably not supposed to, but I couldn’t resist giving hugs to some of my friends and teachers, as well as elbow bumps to others. It really was my ideal graduation party. I loved getting to see my old teachers, especially those from elementary and middle school who knew me when I was much younger than I am today. I had a great time reminiscing and sharing stories about who I was when I was little. By 3:15 p.m. most of my friends had left, and a few of my family members had shown up, but I kept talking with a handful of my friends in our garage. By 4 p.m. there were only two of my friends left, and it meant the world they hung around for so long. I drifted away after a bit to talk to the group of family and family friends who had arrived at that point. A few people couldn’t make it, but for the most part all the usual suspects were present.

“Overall, today was one of the best days of my life. I am one of the luckiest people alive because of the loving, kind, amazing friends, teachers and family in my life.”

I loved getting to catch up with my cousins, aunts and uncles, though because of how many people were there I didn’t spend as much one-on-one time talking as I’d have liked. With our close family friends, who really are more like my second family at this point, I talked about my college plans, hopes for the future and asked them for life advice. I love them all beyond words, and I was so grateful they made the drive to come in and see me. At exactly 5:03 p.m. the sky opened up and began pouring rain for the next hour. Even with the semi-frantic scramble for cover, all that really mattered was that the showers had held off until after 5 p.m.

For the next couple hours I moved from group to group listening to conversations, snacking on sandwiches and cupcakes, staying out of the rain and chatting with the people I love. This hadn’t been the graduation party I’d imagined four years ago, but it was absolutely perfect. I truly couldn’t have asked for a better day. After a while my family headed back to St. Louis and Kansas City so they wouldn’t be driving too late at night. Our family friends stuck around until after 8 p.m. sitting in a circle in our garage. We talked about politics, the pandemic and pop culture. It’s so easy to talk to all of them, and hanging out provided the perfect conclusion to an already amazing day. When at long they headed home, my parents and I packed up the food, moved a few chairs and tables, brought in my gifts, cards and awards and called it quits for the night. We’ll have to clean up the rest tomorrow, but we were too tired to do much else.

My mom wiped down my bathroom so I could use it again, and my dad and I put away leftover food. We didn’t over-order too much, so we actually have a reasonable amount of leftovers for once. My eyes and feet and brain were so tired. All I wanted to do was sit in silence in my pajamas doing absolutely nothing. Instead, I moved all my cards and gifts to the living room and opened them with my parents. I was blown away by the lovely words and absolute generosity people showed. I love everyone who came more than I can say, and I am immensely grateful for being able to share this day (and so much of my life) with them.

“What is human? An ability to reason? To imagine? To love or grieve? If so, we are more human than any human ever will be.”

Tomorrow I’m going to write very long, detailed thank you notes for everyone, and I’ll probably do a little crying. I’m also potentially having a Zoom meeting about my job, but I’m not sure yet because I responded to an email quite late. During the chaos of my party, my roommate texted me, and we need to figure out what exactly we want to bring to our dorm in the next couple days. Overall, today was one of the best days of my life. I am one of the luckiest people alive because of the loving, kind, amazing friends, teachers and family in my life. I wish them all the happiness and beauty this world has to offer, and I hope they know how much I appreciate them. I would not be the person I am today without their encouragement, support and patience.

“What is human? An ability to reason? To imagine? To love or grieve? If so, we are more human than any human ever will be.” ― Jonas Maliki, Sense8

How did you spend your 138th day of social distancing? Let us know in the comments below.