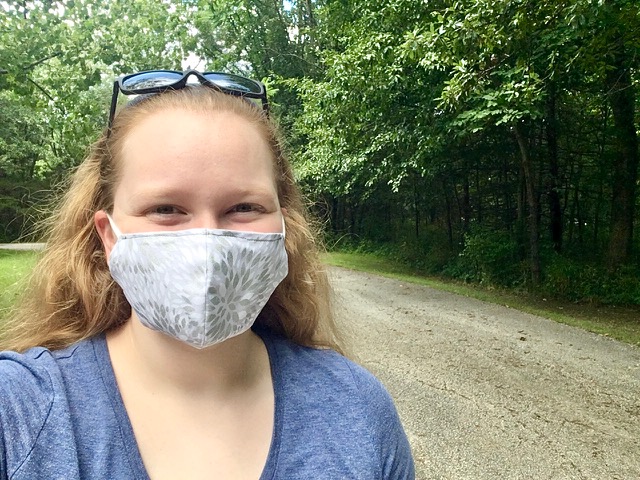 One should not waste a beautiful day. Today is August 4.

When I got up this morning, our whole house felt chilly. We had our doors and some windows open, but unlike the past several days the temperature wasn’t in the 85-90 degree range. I felt sleepy and ended up tucked tight under a blanket on our couch. I spent a while reading and not doing much of anything, which seemed a perfectly acceptably way to start my day.

Initially I’d planned on working on creating a website today, but my mom was feeling under the weather, so I didn’t want to bother her with lots of questions. I still have some time to get it up and running, so I’m hoping I’ll be able to start tomorrow if she’s feeling better. As a precaution in case she has something worse than a cold or the flu, she isolated herself in her room for most of the day. I know when I’m feeling crummy all I want to do is sleep and be in bed, so I did my best to stay quiet and not disturb her when I was inside.

I’d gone to bed last night before finishing the second season of The Umbrella Academy, so I watched the final two episodes this morning. The first season was good, but I loved the second season. There was so much character development, better communication and emotional conversations. The fight sequences were awesome to watch, and the actors played their roles so well. I highly recommend anyone who has the time check the series out. There was a cliffhanger at the end of this most recent season, and now I can’t wait to see what happens next.

When I finished the show, I decided to drive over to a friend’s house to deliver a letter I’d written for her. My car didn’t have much gas left in it, but I also didn’t want to stop at a gas station, so I hoped I’d be able to make the trip without a problem. On the way there the directions I was following took me along lots of small streets in a winding path. I only stayed at her house for a few minutes to talk then headed back home. My return trip used a different route and followed mostly major roads and highways. I’m not sure if there was any real difference, but getting home seemed faster than driving to her house, even though the drive took the same amount of time both ways.

After I got home, I decided to tackle writing thank you notes for graduation gifts. All in all I ended up writing 13 thank you notes to various people. I did my best to personalize each note and convey how much it meant for everyone to be at my graduation party. My handwriting isn’t the best, so I hope no one has trouble reading what I wrote. The remaining six cards I need to write all go to teachers who attended my graduation party. Unlike friends and family members, I don’t have teachers’ addresses. I want to give physical thank you notes and not just send an email, so I think my two options are to try and find addresses online or mail the notes to the teachers’ respective schools. My plan is to try searching for home addresses, but if I can’t find them then I’ll go with sending them to schools.

I have letters I want to mail to friends as well, so I’m planning on dropping off the notes at the post office some time in the next three days since I’ll be near downtown each day. My brother and I are planning on walking around the University of Missouri ― Columbia’s campus tomorrow morning so he can help me find where my classes are. Afterward we might pick up lunch somewhere, if we can find a safe place to eat. I appreciate him taking the time to show me around so I won’t be as much of a lost, confused freshman when I move in on Aug. 15. It’s crazy to think in just more than a week I’ll be going to sleep in an entirely new place with almost complete strangers.

A friend of mine recently told me I need to actually post on Instagram every once in a while, so I appeased her today by writing a long caption about all I’ve learned in high school and selecting three photos from my graduation: one with my parents, one with RBHS Principal Jacob Sirna and one with my close friend and fellow Editor-In-Chief, Anna Xu. I don’t love the idea of sharing parts of my life with the wider world, though I supposed that’s exactly what these Pandemic Diaries are. People’s comments were nice, and hopefully I’ve satisfied my friend’s request.

In the evening I watched The Kissing Booth 2 on Netflix. To be completely honest, I wasn’t a fan of the first one and watched the sequel specifically to make fun of the show. I have nothing against the actors, and I think they all do their jobs well. I’m just not a huge fan of the whole trope where a girl needs a guy to be happy and complete. I did appreciate the LGBTQ representation the sequel featured, though it didn’t have as prominent a storyline as I’d have liked. Overall the movie wasn’t terrible, it even had a pretty nice soundtrack, but I wouldn’t suggest anyone take its romantic advice too much to heart.

“Nothing ever goes away until it teaches us what we need to know.”

To finish off my day, I joined my dad outside to enjoy the deck fire he’d made. We listened to Scottish/Irish/Celtic music (I couldn’t place the exact playlist he had on) and talked about college. With the weather and the smell of smoke, it seemed like a preview of fall. Before my brother and I go to campus tomorrow, my dad’s making smoothies. I also need to make sure I set up my dining plan and figure out my school billing account, so I want my brain to be fully functioning to understand those logistics. Except for my mom not feeling well, today was a great day.

“Nothing ever goes away until it teaches us what we need to know.” ― Pema Chodron

How did you spend your 140th day of social distancing? Let us know in the comments below.