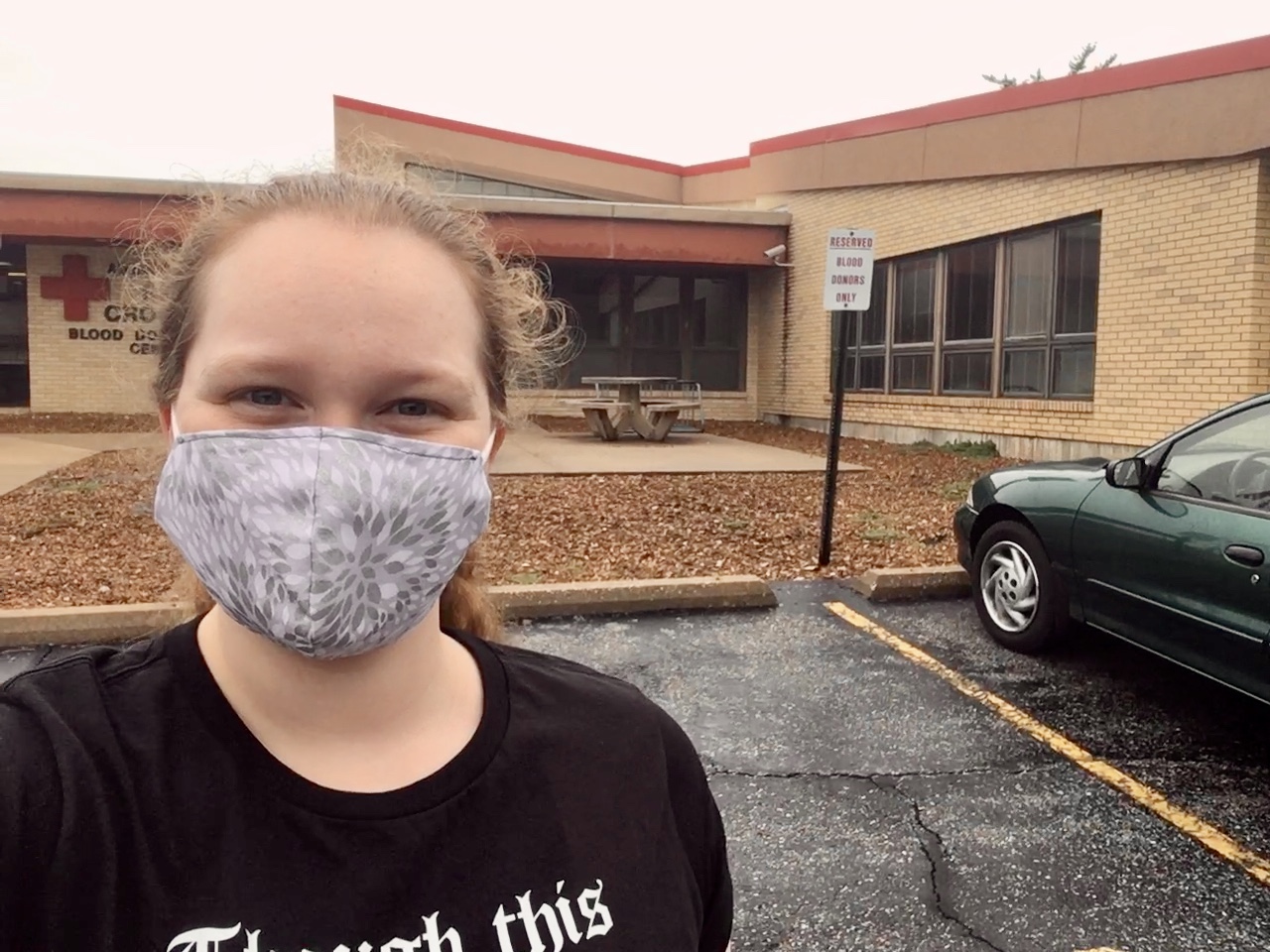 I woke up this morning a little after 8 a.m. to the sound of heavy rain and thunder. It was stormy and dark outside, and I would have preferred to stay in bed. I had a blood donation appointment with the Red Cross at 9:15 a.m. and wanted to deposit some money at the bank beforehand, so sadly I had to start my day. I was out the door in half an hour, trying to make as little sound as possible so as to not wake the rest of my family.

The rain came down heavily on my drive to the bank, and I brought a rain jacket even though the temperature was warm. When I got there, I parked and tried to enter the building to deposit my money with a teller only to discover the bank isn’t open on weekends. I ended up having to use the electronic teller machine instead. Making the deposit wasn’t an issue, but my car was. I’d forgotten the windows weren’t working and rolled the driver’s window most of the way down to reach the machine. When I’d finished the transaction and went to roll my window back up, however, it refused to budge. I tried for a minute or two then gave up, resigning myself to driving in the rain with a non-functional window.

Luckily for me the Red Cross was close by and the rain had slowed. When I parked at the blood donation center, I tried to fix my window again to no avail. I had to be inside shortly, so I ended up covering the window from the outside with my rain coat by closing the door on it. It wasn’t a pretty sight, but it did the job well enough for me to be gone for half an hour, as long as the weather didn’t get worse.

Donating blood was a relatively quick and painless process. The people who spoke with me and took my blood were polite, friendly and professional. I did end up almost accidentally dislodging the needle in my arm when I sat up to move my phone and wallet away from the edge of the seat, but other than that everything went well. I had a snack and a box of apple juice when I was done donating to make sure I was feeling hydrated and fine, then I was on my way.

To my great happiness, my makeshift window held up just fine. When I went to remove it, I ended up tossing it on the ground and yelling at the annoying spider that had decided to make a new home of my jacket, but otherwise there wasn’t a problem. If I’d still had the money I needed to deposit in my car I would have been worried someone might want to steal something, but without the money there was nothing of value in the vehicle. I’d texted my family a photo of the jacket-covered window, but they were still sleeping and didn’t respond until I was driving home.

When I got back, my parents were just waking up, so I told them all about the unfortunate series of events making up my morning. My mom and I traded our cars’ places so mine could be in the garage and out of the rain. We attempted to manually fix the window by pulling it up, but that didn’t accomplish anything. The car is old but still works (for the most part) so we’ll have to pay to repair the window next week so it can remain functional. I felt bad about messing up the window, but if something had to go wrong while I was driving I was glad it was simply a hassle and not a crisis.

About 45 minutes after I got back home, a long-time friend of mine Katy Miller came by to hang out and catch up. We’ve been friends for years, and it felt great to talk with her. We sat outside on my deck watching various animals make their way across my yard. I’m going off to school in a week, and in a couple months she’s moving out of state. It’s crazy how fast our lives have changed, but I’m happy for her and wish her all the best. In the two hours she was able to stay we talked about school and life and the future, as well as the myriad other topics we could think of. I hope we don’t drift apart, even if that is an almost inevitable part of growing up, because I think she is a wonderful person. I wish her only happiness, love and adventure for the rest of her life.

Once she left, my mom made me a hot ham and cheese sandwich and leftover watermelon for lunch, and we talked while I ate. I took a little time to be by myself after that and watched an episode of Dynasty before my parents and I decided to watch a few episodes of Chuck together. A little before 4 p.m. I had us stop so I could make fudge. Yesterday my former Spanish teacher Eva Vazquez gifted me her Spicy Mexican Fudge recipe, which I’m not going to disclose. It wasn’t hard to make and took less than 20 minutes in total. My mom helped me a little, but I did most of it on my own. Vazquez said I should be able to make it using a microwave instead of a stove, which means I can potentially make it in my dorm room if I want to.

The fudge takes 3-4 hours to chill, so it was ready to eat by the time we finished dinner. My brother and dad played tennis in the afternoon, so we had a late meal, which gave the fudge plenty of time to solidify. It was sweet with a little kick at the end. I am so grateful she entrusted me with the recipe, and I hope I did it justice. I can’t wait to try making it for my roommate and suitemates this fall.

“The most difficult thing is the decision to act, the rest is merely tenacity.”

In the evening my family and I played a game of Spades together, per my request. My dad and I won. I only have a few more days at home, which is absolutely terrifying for me to think about, and I want to make the most of it. The reality of me moving away from home is starting to kick in, and I keep worrying I’m not going to be ready or will make a fool of myself. I’m sure that’s how my peers are feeling at the moment, so I’m probably not alone, but it’s still scary. In the next week I need to create the skeleton for a website, order all my books for school, make sure I’m packed and ready to go and somehow figure out how to be emotionally ready to become a semi-adult. It’s a lot to handle, but I’m going to try my hardest, even when I feel petrified.

“The most difficult thing is the decision to act, the rest is merely tenacity.” ― Amelia Earheart

How did you spend your 144th day of social distancing? Let us know in the comments below.